Ken Shepherd pointed out Monday that Chris Matthews marched a hard line on Ben Carson’s memoir and the charge stories in it aren’t true: “you better damn well know they're true. Now, maybe you know you can't substantiate them right away. But they'd better be damn true, not sort of true.”

Soopermexican at The Right Scoop found Matthews jumped all over his MSNBC colleague Steve Kornacki before Friday night’s Rachel Maddow forum with the three Democratic candidates. Perhaps before the show, Kornacki dared to wonder how GOP voters might interpret the liberal-media attack, which set off Mr. Thrill Up My Leg. “Our job is to delineate the truth, and then let people react to it. You know, ‘we report, you decide’?”

You know the man’s angry when he spews Fox News slogans at you.

Remember, Matthews compared Obama's phony memoir Dreams from my Father to Mark Twain. The book was “unique because he’s a politician and not since U.S. Grant has a politician written his own book, and that is refreshing.” It was great literature. “It’s almost like Mark Twain. It’s so American, it’s so textured. It’s so, almost sounding like great fiction because it reads like us. It’s picturesque. Is that the right word, ‘picturesque’? I think it’s got that quality.”

It was fiction, all right. Notice how impatient Matthews is with a fellow liberal-leftist, having a bad case of conversatus interruptus:

CHRIS MATTHEWS: Well, there you go into trouble there, Steve. I know you’ve been more accepting of this interpretation, but I just want to ask you -- when you say "they," when you say a group of people and you can’t remember them...

MATTHEWS: ... but yet in his books, he’s far more definitive. He said, I was offered a full scholarship to West Point, not, “I talked to somebody at an event who said they could get this for me.” I was offered. Now, what does offered mean in English? Here, take it. That`s what "offered" means.

KORNACKI: I understand completely what you’re saying, but --

MATTHEWS: Well, what do you say?

KORNACKI: My point on this is --

MATTHEWS: Is there a problem with what I`m saying?

MATTHEWS: Is there another interpretation? Help me with it!

MATTHEWS: No, give me another interpretation.

KORNACKI: My point here is not to argue with your interpretation. My point is to say --

KORNACKI: What I’m curious to see here, and my point that I`m trying to raise -- and you say I’m being more accepting of this is --

MATTHEWS: Yes, you are!

KORNACKI: – how will the story be interpreted by the people...

KORNACKI: And that’s what I`m wondering. The people Joy is describing – .

MATTHEWS: Well, our job is to try to delineate the truth –

MATTHEWS: – and then let people react to it.

KORNACKI: Hang on! But I think an element of politics...

MATTHEWS: You know, we report, they decide?

KORNACKI: An element of politics –

KORNACKI: An aspect of politics is how people interpret truth...

KORNACKI:  -- and how people interpret -- 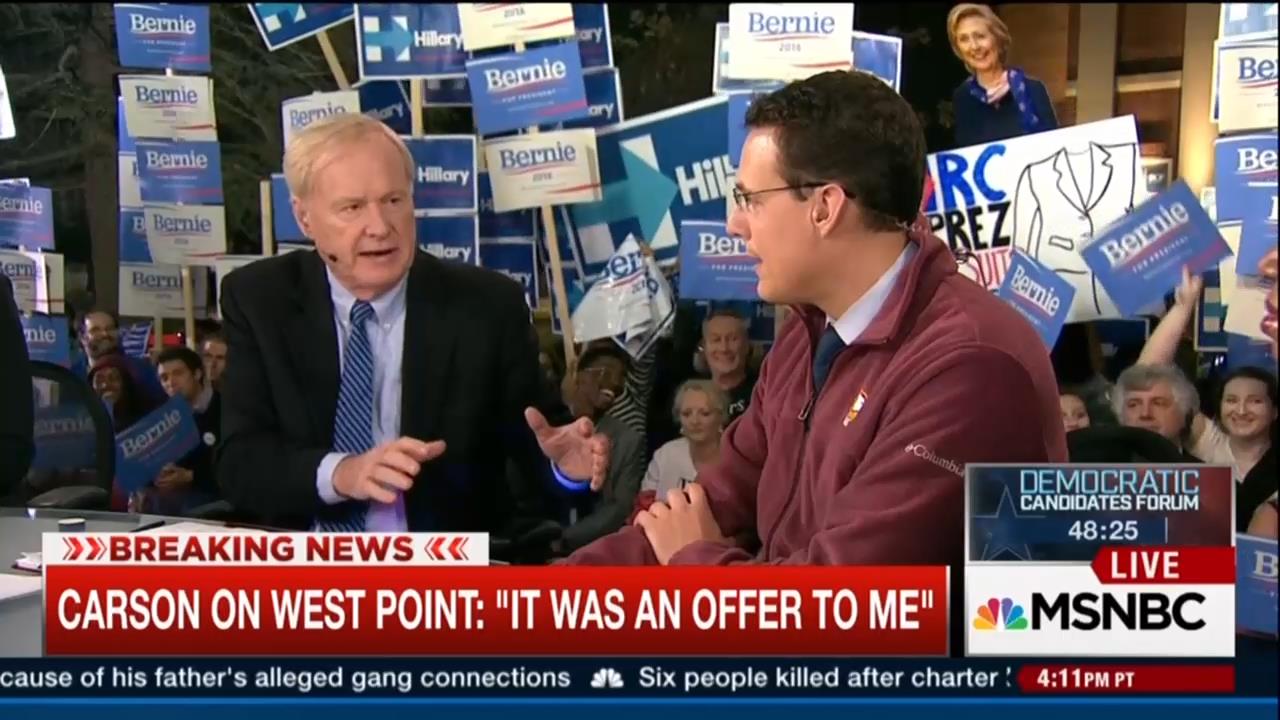 MATTHEWS: How do you interpret it?

MATTHEWS: How do you interpret it?

MATTHEWS: No, I`m just -- how do you interpret that statement?

KORNACKI: I`m trying to give you my interpretation of the situation, which is...

MATTHEWS: How do you interpret his words?

KORNACKI: I interpret his words as leaving enough gray area where if you are an evangelical Christian who reveres Ben Carson and has revered Ben Carson for years, you can look at this situation and you can say, There is enough gray here that I will stand with Ben Carson against the liberal media that is trying to prosecute another one of my heroes.

MATTHEWS: So there’s a range of possible truths.

MATTHEWS: Once you revere somebody, it`s very hard to come back on them.

How does Matthews fail to see his own double standard on Obama’s memoir? That he reveres somebody and never doubts any of his disproven life stories?

This is all Kornacki said on camera before the Matthews outburst:

I think what Kasie [Hunt] was saying in the last hour, though, is that the fairest thing we can say about this is Ben Carson is somebody who is a familiar figure to some people, but he is new to the national stage. He’s new to this spotlight. I think at the start of the summer, people looked at Donald Trump and they said the Donald Trump thing would be short-lived. And then we forgot that Donald Trump had been on the public stage for four decades. We know a lot of Donald Trump’s  secrets. Ben Carson rockets to first place. We`re going to find out a lot about Ben Carson, now and it`s a question if he has the durability of a Donald Trump

Matthews closed the segment with another shot at Kornacki: “Thank you, Steve Kornacki for your vigorous defense of a range of possible interpretations. I think that’s a way of putting it.”