CNN did a poll on the Iran deal from September 4 to 8. On Sunday morning, CNN pollster Jennifer Agiesta (formerly of The Washington Post) reported the results – another poll showing deep skepticism about Iran, and the prospect that Iran will cheat on any nuclear deal. Obama has a bad disapproval rating on Iran. You'd never know this from all the "major victory for Obama" talk on this deal.

Will any of this come up from the CNN moderators in Wednesday night’s debate? Or will they ignore it? Agiesta summed it up:

A new CNN/ORC poll finds 59% disapprove of the way Obama is handling the U.S. relationship with Iran, and about half would have preferred Congress reject the deal. Few believe Iran will abide by its terms, and a growing number consider the country a serious threat to the U.S.

Most Americans think Iran will ultimately violate the terms of the agreement, with 37% calling that extremely likely and 23% saying very likely. Just 10% think it's not at all likely that Iran would break the agreement. Republicans (83% likely) and independents (58% likely) are more apt to believe Iran would violate the agreement than are Democrats (44% likely).

Nearly half (49%) now say they consider Iran a "very serious" threat to the United States, up 10 points since April. That shift came across party lines with double-digit increases in the percentage viewing Iran as a very serious threat among both Democrats (up 14 points to 43%) and Republicans (up 15 points to 68%). Fewer see North Korea (37%) or Russia (30%) as a very serious threat, but both those figures have increased 5 points since April.

Most of these results have been ignored on CNN's air. The one significant poll result mention came on Sunday morning’s Inside Politics. John King reported 47 percent said Congress should approve the Iran deal (while 49 percent said no.) Notice King only reports half that finding: 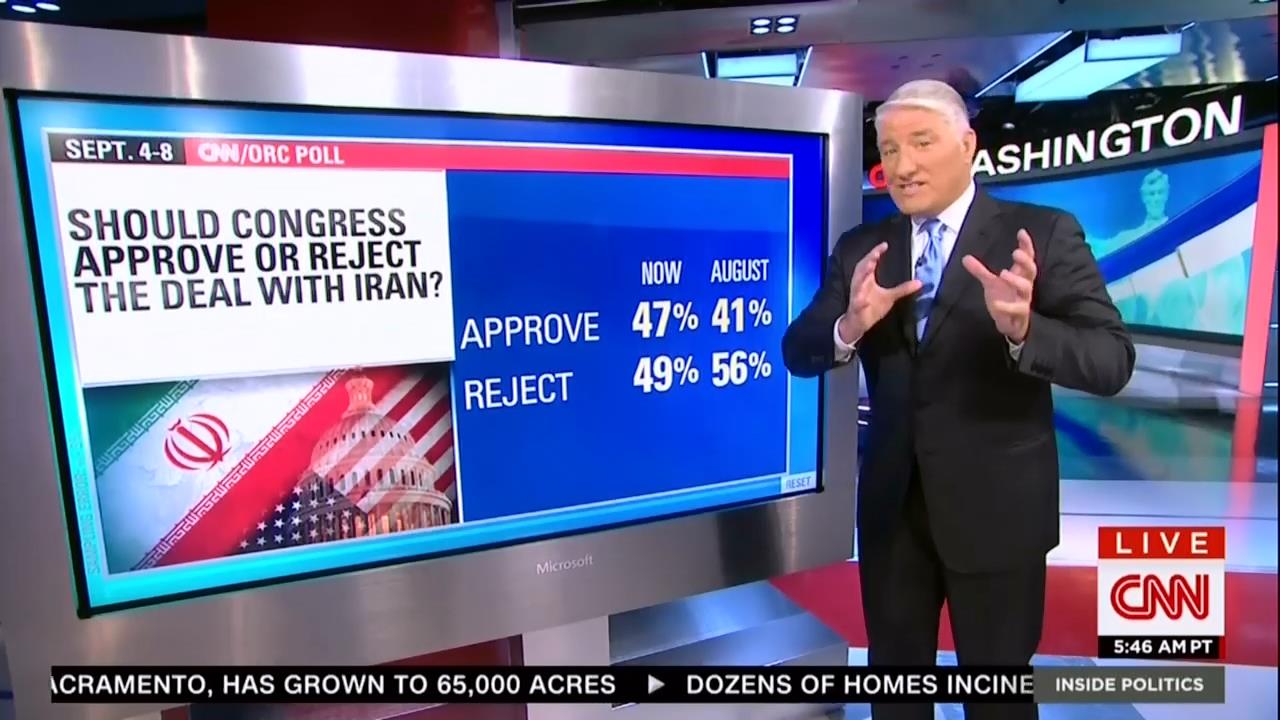 JOHN KING: Now, of course, we know from Democratic support in the Senate, the President will get his Iran nuclear deal. What do people think of that? As this debate has played out, support has actually gone up just a little bit -- 47 percent in our polls says Congress should approve the nuclear deal. That's up from just a month ago, when only 41 percent said that. Now the President gets that because he had enough Democrats to block Republicans from rejecting the deal.

But if the deal fails, if Iran cheats, look at this. 64 percent of Americans -- that's a lot of Democrats as well as Republicans think the United States should take military action if Iran cheats on that deal.

Two other results came in....in the wee hours overnight. On Monday morning at 1 am, anchor Errol Barnett glossed over it. “Turning now to the Iran nuclear deal, and there's no shortage of American distrust. Take a look at the new CNN/ORC poll. It shows about half of those questioned would have preferred Congress to reject the agreement. And for many Iranians, that distrust is mutual. Fred Pleitgen has more on sentiments in Tehran.”

The next hour, anchor Rosemary Church offered another version of it: “I want to turn now to the Iran nuclear deal, and there is no shortage of American distrust. A new CNN/ORC poll shows about half of those questioned would have preferred Congress to reject the agreement. And for many Iranians, the distrust is mutual.”

CNN’s polling question on the Iran deal heavily implied to respondents that the U.S. had negotiated a deal with five other countries that Congress needed to approve:

As you may know, the U.S. Congress must approve the agreement the United States and five other countries reached with Iran that is aimed at preventing Iran from developing nuclear weapons before it can take effect. Do you think Congress should approve or reject the deal with Iran?