Liberal journalists and pundits were losing control over the Murdoch family buying another prestigious media property, this time the National Geographic brand. 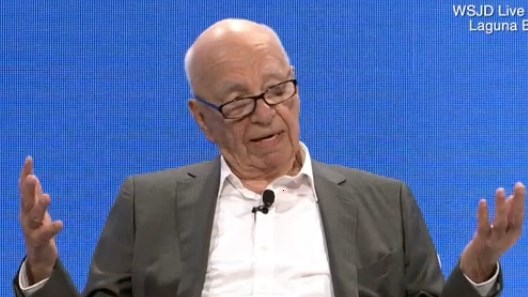 Xeni Jordin at Boing Boing freaked out over a “climate change denier” like Rupert Murdoch taking over a science-promoting property:

So Rupert Murdoch will be to some large extent controlling a $1 billion organization whose stated mission includes giving grants to scientists.

Murdoch recently tweeted he's a skeptic, not a denier. NPR media reporter David Folkenflik seemed to be channeling the Boing Boing panic in his Wednesday night report on All Things Considered. James Murdoch suggested no raging right-wing takeover to panic the eco-panic movement:

DAVID FOLKENFLIK:  Fox News employees prominent conservative commentators who are outspoken critics of the scientific establishment and even question climate change. James Murdoch is the CEO of 21st Century Fox, and his family controls the publicly traded company. So I asked him, how would the National Geographic titles be affected by their new majority owners?

JAMES MURDOCH: Well, first of all, it won't be. We are a large and diverse media company around the world with lots of different outlets and lots of different creators and voices and journalists in various parts. They don't always agree on things.

FOLKENFLIK: Murdoch says 21st Century Fox likes to invest in brands that echo across borders and that the digital age requires unifying National Geographic's titles across all platforms.

MURDOCH: The value of this brand comes from its integrity and, fundamentally, it's authenticity with its customers, and you would never do anything with it that presupposed changing any of that.

Jack Mirkinson at Salon expressed the traditional left-wing view that the nonprofit media in America isn’t at all the kind of socialist infrastructure they desire:

National Geographic may be sacrificing its non-profit status, but Wednesday’s deal partially cemented what had already been put in place.

Still, that doesn’t mean we shouldn’t take anything away from how unsettling it feels to see a stalwart brand like National Geographic go down such a blatantly commercial path. It has whiffs of the creepiness that surrounded the announcement that HBO will now be the primary home for “Sesame Street.” Both events highlighted the deplorable lack of a non-profit media infrastructure in the United States.

America spends a fraction of the money other industrialized countries do on public media. Networks like the BBC or CBC are far from perfect, but they have a commitment to public service broadcasting that puts American networks to shame. PBS, a mere minnow in this universe, still produces programs on art, science and history that would never make it onto a broadcast network. If you want anything beyond weather reports, top 40 and horrible people discussing sports, public radio is pretty much the only game in town.

Of course, public media in and of itself is not the answer. The news that PBS or NPR produce, for instance, is often as bland and corporate-friendly as the news on any of its rivals, and public broadcasters are often subject to government pressure.