WashPost Gushes For Over 3,000 Words on Black Transgender Woman Who's 'Not Caitlyn Jenner'

The Washington Post’s ongoing series of articles aggressively promoting the acceptance of the science-deniers who practice transgenderism continued with a sprawling 3,133-word article on the front of Thursday’s Style section. The headline was “LIFE AS SARA: What it’s like to be a transgender woman when you’re not Caitlyn Jenner.” In other words, when you’re black and almost homeless.

The Post had a massive color photo of “Sara” Simone that took up the entire half of the paper above the fold. The story (and five additional photos, two of them almost a half-page each) took up all of pages C-6 and C-7. At the top of each of those inside pages were the sensitive statistics:

“Transgender people are four times as likely as the general population to live in poverty. They disproportionately experienced work and housing discrimination.”

“Sixty-four percent of transgender people, in one comprehensive survey, reported being sexually assaulted.”

The headline inside the paper was “After transition, transgender woman discovers acceptance.”

Acceptance is apparently mandatory. One can not politely disagree. There’s acceptance, and then there’s hate, apparently. There is no space in this article for a critic, as usual. That would be considered rude. (Rudeness is saved for Dick Nixon.)

Style writer Monica Hesse – whose last major article sensitively chronicled a woman who went on a road trip, complete with Post reporter, to get an abortion in Montana – once again brought her one-sided empathy to the task. 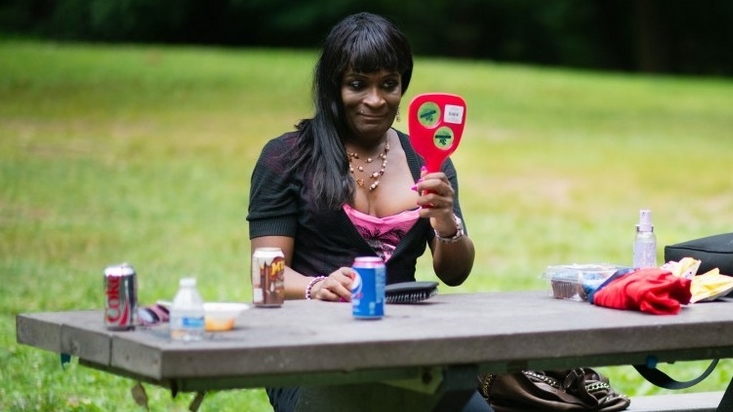 We’re introduced to “Sara” primping, with “a spritz of Paris Hilton perfume, a plunging black T-shirt showcasing the breasts she had patiently earned with hormones. Was the shirt too racy? Maybe. But it was better, she’d decided when she transitioned four years ago, to have men stare at her chest than to have them scrutinize her face and ask whether she was a man or a woman. “Better they whistle at me than jump me,” she sometimes said, because in her particular existence as a transgender woman, catcalling seemed the lesser and safer of possible indignities.”

That’s what Hesse highlighted on Twitter: “Better they whistle at me than jump me.”

Hesse continued: “Sara added a set of false eyelashes, one retrieved from the carpet where it had escaped. Two tan hormone patches, one for each buttock.”

As almost required, Hesse reported “Sara” was almost suicidal pre-transition, and now was mostly elated (when not confronted by a society stuffed with haters):

Sara had clarity on one thing: She was happier now than she ever was in the decades she lived as a man. Her physical transformation ended years of anxiety and depression and felt “like celebrating Christmas every morning”...

But the happy life was one that required Sara’s hard work, navigating a society that could still feel unfriendly, every day.

Sara woke up and it was a bad morning, a shaving morning, which she disliked because of the fact that it was still occasionally necessary. “Definitely got some things here I need to get rid of,” she muttered, reaching for the razor, which she kept hidden so as not to risk questions from guests or from her housemates who, as far as she knew, were unaware that she was transgender. The housemates worked night shifts and kept to themselves; Sara only saw them in passing, which was fine with her.

Some nights when they were out, she allowed herself the freedom of puttering around in her underwear, but even when she was completely alone, she tried to never be completely naked. “If I am nude there is some ‘creative hiding of a particular part’ going on,” she explained to her Facebook friends, and such a thing became exhausting. It was exhausting, continually, to deal with having an appendage that was a part of her body but did not feel like a part of her being.

The penis denier is one of the most sympathetic figures The Washington Post can imagine. The Post hired Chris Mooney as an "objective" reporter on environmental matters after he wrote the book The Republican War on Science. Between transgender delusion and the denial that a baby dies in a "life-saving" abortion, there's plenty of fodder for a book called The Democratic War on Science.