No one would go broke betting the liberal media will try harder and harder to avoid new videos from the Center for Medical Progress. While the first video drew some coverage, both print and broadcast media were shamelessly downplayed or ignored the second video. 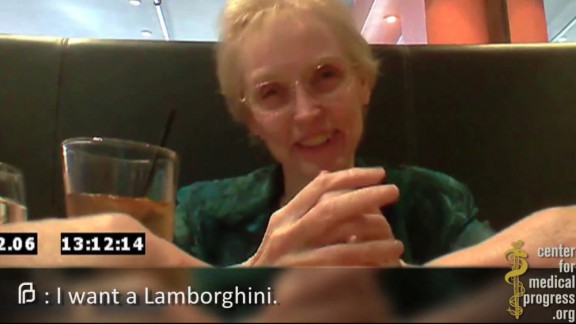 It’s not because it wasn’t gripping TV. In that video, Dr. Mary Gatter, medical director at Planned Parenthood Los Angeles, uttered a memorable joke about her lust for luxury cars. “It’s been years since I talked about compensation [for baby organs], so let me just figure out what others are getting. If this is in the ballpark, it’s fine. If it’s still low, then we can bump it up. I want a Lamborghini.”

She didn’t really want the car, but she was interesting in acquiring the most money she could get for the baby body parts. She was talking about maximizing profit. Let's review the damage control:

CBS aired one story on this shocking second tape, but ABC and NBC and the PBS NewsHour skipped it.

NPR had no time for baby parts, but did air an entire story on the July 21 All Things Considered (a risible program title) on the usual feminist narrative, worrying about women having to drive two hours to get an abortion at Planned Parenthood in Montana.

MICHAELA PEREIRA: An antiabortion group releasing another undercover video on Planned Parenthood. In it, Dr. Mary Gatter is shown talking with activists posing as medical company representatives. She's heard haggling prices of fetal parts for medical research, at one point joking she wants a Lamborghini. A Planned Parenthood official responding, saying the video was heavily edited in an attempt to, quote, "support false and outrageous claims".

There were two interviews that touched on Planned Parenthood (if not the details of the second video). On The Lead on July 21, CNN host Jake Tapper asked GOP presidential candidate Carly Fiorina about rape and incest exceptions, and not the video, but she certainly brought it up. "This videotape is depraved."

On New Day on July 23, CNN host Chris Cuomo asked Sen. Angus King “What is your take on the video [sic] that came out? And does it substantiate that report that Planned Parenthood is selling baby parts for profit?” King dismissed it: “I haven't seen the cuts and how it was edited and those kind of things. But my understanding is it was edited and created an impression not necessarily accurate.” 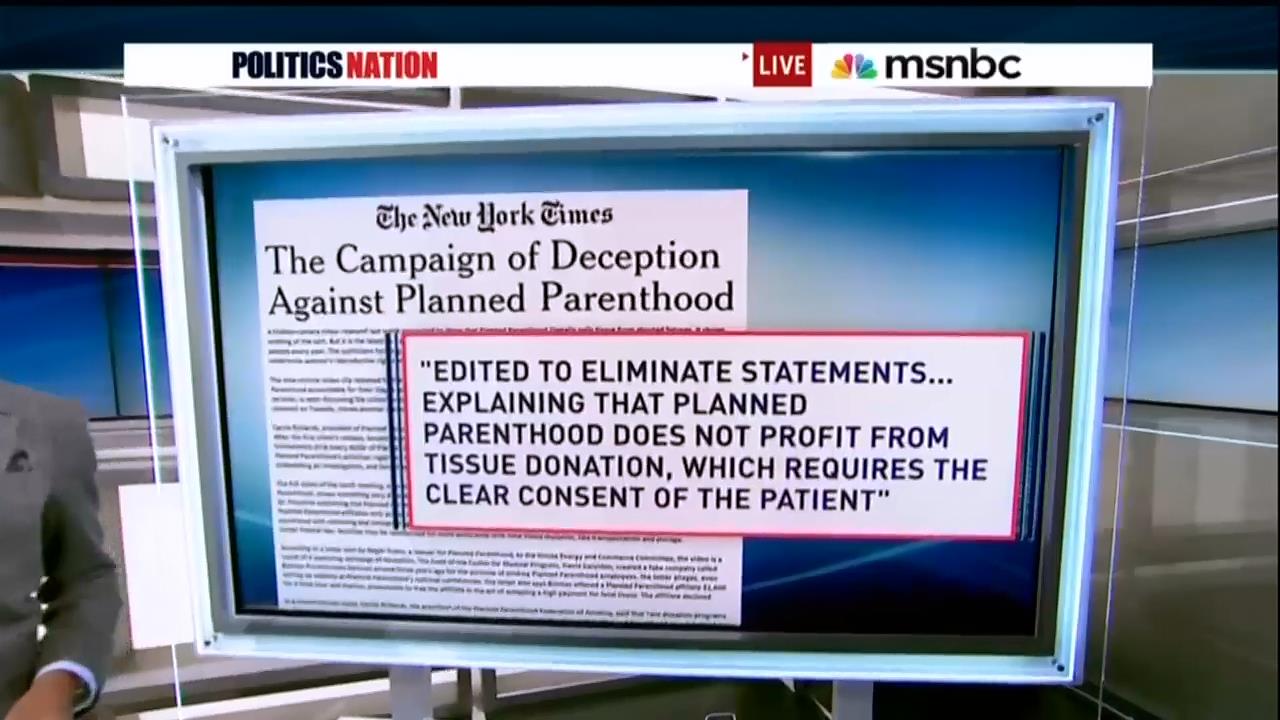 In the Nexis database of transcripts (covering programs from 5 PM Eastern to 11 PM), MSNBC ignored the second tape entirely, except for Al Sharpton hosting a bizarre segment with two feminists where he began “The videos’ claims are graphic and disturbing. They’re also not true.” He quoted an adamant New York Times staff editorial calling it a “campaign of deception against Planned Parenthood.” The tapes are plain. There are body parts for sale. Sharpton should never call anyone else a “denier.”

Now With Alex Wagner had a memorable take on July 21.

Did national newspapers show they were better than television? No. The Washington Post had one story on the second video – online, never in the newspaper.

USA Today is a joke: it has failed completely  to cover either videotape.

The fourth paragraph was pure propaganda: “The organization provides a variety of healthcare services, including cancer screenings, HIV tests and family counseling.” How in the world do they leave out the abortions? It’s like saying McDonald’s offers a variety of salads and ice cream cones.

At least The New York Times reported the second video in a front-page story. But they focused on the video producer, David Daleiden, and his “anti-abortion militancy.” Has anyone in the liberal media ever found “militancy” inside the abortion industry?

Then reporter Jackie Calmes characterized the videos: “Once again, Planned Parenthood condemned the scam for deceptively characterizing its handling fees to cover expenses, which are legal, as illegal profiteering.”

Secretly taping Planned Parenthood is a “scam”? Would the Times ever describe any liberal-media hidden-camera taping –  such as ABC's Food Lion probe -- as a “scam”?

The word “scam” certainly could apply to abortion doctors who carefully crush babies to harvest and sell the organs, but our liberal media is so deep in the tank for the abortion industry that they want to stop noticing that these damning videos exist, even as the evidence piles higher and higher.