NBC journalists need to decide who Darth Vader is in their tortured political analogies. On Tuesday’s Today, Hallie Jackson said to an on-screen colleague, “[Let me] raise you a Star Wars analogy.” But back in 2011, Dick Cheney was the evil Vader.

Talking about the probable loss of Liz Cheney in Wyoming’s congressional primary, she connected, “I'm told by one source that Cheney's staffers are really big fans of a recent editorial that compares air to Obi-Wan Kenobi. Okay, defeated  initially, but ultimately part of the force that works to take down Darth Vader, or in this analogy, Donald Trump.”

Jackson rather lamely continued the sci-fi language: “But I think it gives you a sense of how her team is kind of casting this as a bigger, broader, galactic fight here.” The problem with Trump being Darth Vader is that NBC already suggested that Dick Cheney may be Vader.

The Star Wars column in question referenced by Jackson comes from The Washington Post where Jonathan Capehart tried to settle just which GOP villain is, in fact, the genocidal Darth Vader:

Liz Cheney (R-Wyo.) as Kenobi and former president Donald Trump as Vader. Now, I realize that Cheney’s father, former vice president Dick Cheney, has traditionally been known as Darth Vader, what with the Iraq War and “enhanced interrogation” techniques and all that. But work with me, people.

So, who, exactly, is Darth Vader, NBC? Dick Cheney? Donald Trump? Or would it be any Republican the network doesn’t care for?

The need to compare all Republicans to Darth Vader was sponsored by Citi cards. Click on the link to let them know what you think.

SAVANNAH GUTHRIE:  We want to turn to Hallie Jackson, our senior Washington correspondent. Hallie, to say this is a long shot for Congresswoman Cheney to pull this out is an understatement. What are you looking for? What are the numbers there? 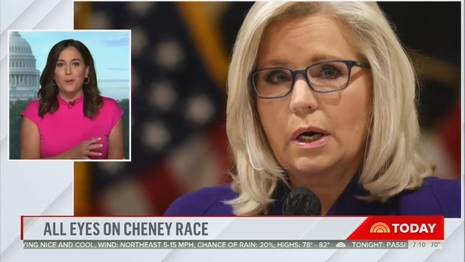 HALLIE JACKSON: So she —  a recent poll has her down by something like 20 points. So you are right. This is an absolutely uphill battle. Let's stipulate anything can happen. But right now she will almost certainly not be able to come out ahead here. There has been a push to get Democrats to switch their party registrations and vote in this primary. But it would really take something extraordinary for that math to work out for her, to overcome this hole that she's in. It's not like there is a whole ton of Democrats in Wyoming. It's a very red state. Donald Trump beat president Biden by 40-plus points in 2020 there. So it is an uphill battle. She knows it. She is very clear eyed about what's ahead.

GUTHRIE: Well, we're talking about Wyoming. So let's use a cowboy metaphor, it doesn't seem like she is ready to ride off into the sunset. Seems like she's raised her national profile and has political aspirations.

JACKSON: Yeah. It's not the end of the road for her. Right? It's the start of another one. Let me see your cowboy analogy and raise you a Star Wars analogy, because I'm told by one source that Cheney's staffers are really big fans of a recent editorial that compares air to Obi-Wan Kenobi. Okay, defeated  initially, but ultimately part of the force that works to take down Darth Vader, or in this analogy, Donald Trump. But I think it gives you a sense of how her team is kind of casting this as a bigger, broader, galactic fight here.

She understands how it will certainly cost her seat in Congress. There is this 2024 speculation. You talked to her about it. It may be premature. Cheney to start a think tank, do a media tour, join you up with other anti-Trump voices and she's not giving up the national stage, at least right  not now. Think about what we're going to see next month. The next January 6th hearing that she will be a big part of. She'll stay in the spotlight.