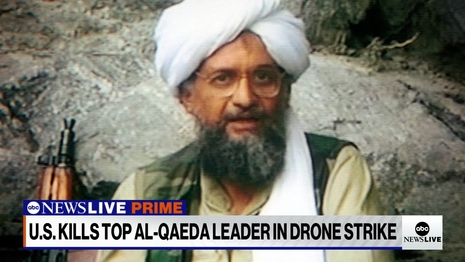 The satisfying end of one of the key plotters of 9/11 is something all Americans can rally around. Yet liberals in the media didn’t react this way when the United States took out Iranian terrorist mastermind Qasem Soleimani in 2020.

But first, here’s how CBS News journalist John Dickerson closed live coverage of the death of al-Zawahiri on August 1, 2022. Over a live shot of Manhattan, he offered these stirring words: “All those that plotted the [9/11] attack are either dead or captured. One World Trade stands as the tallest building in the Western Hemisphere. A reminder of the resilience of New York City and the American people.”

During ABC’s live coverage on August 1, Cecilia Vega hyped Biden, citing last year’s disastrous pull-out of Afghanistan: “There seems to be a little bit of ‘we told you so’ coming from the President and certainly senior administration officials here.”

She concluded: “Senior administration officials say this is proof you don't need American troops on the ground and in harm's way in Afghanistan.”

The liberal ladies of The View were beside themselves on August 2. Reacting to video of Biden announcing the death of al-Zawahiri, co-host Joy Behar gushed, “He’s like Liam Neeson” in the Taken series. Quoting from the 2008 movie, she spun Biden's speech this way: “I will find you and I will kill you.”

Co-host Whoopi Goldberg made things explicitly partisan: “A Democratic president did this, not a Republican.” 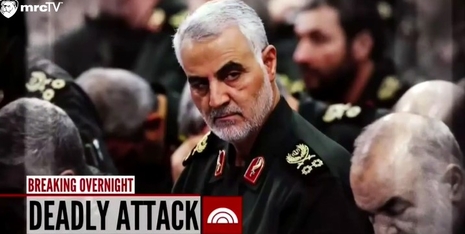 Things were very different on the networks when the United States eliminated Soleimani on January 3, 2020. On that morning’s Today show, co-host Hoda Kotb appeared to portray the terrorist’s death as bad news for the U.S.: “Iran vowing retaliation amid fears the two nations are on the brink of an all-out war. Oil prices already skyrocketing.”

Nightly News anchor Lester Holt poured cold water on the death of Soleimani. Talking to NBC military analyst James Stavridis on Today, he asked: “Is this a more dangerous world we’re waking up to?” “Indeed it is,” Stavridis replied.

Both Holt and guest Andrea Mitchell highlighted Democrats calling the killing “reckless.” On the same day’s Good Morning America, Mary Bruce explained that members of Congress weren’t happy with Donald Trump, “warning that this is a reckless escalation that could have serious dire consequences.”

On the January 3, 2020 CBS This Morning, Holly Williams described the man who ordered the killing of U.S. military members as “revered,” “inspiring” and a “military genius.” Like her colleagues, she put a negative spin on the U.S.’s actions: “There are fears that the killing of Soleimani, a revered figure in Iran and some other places in the Middle East, could see simmering tensions between the U.S. and Iran turn explosive.”

We end at the beginning: Joy Behar. Unlike with Biden, she did not compare Trump to an action movie star. On the January 6, 2020 View, the co-host griped:

Elizabeth Warren, who's running for president, she says that President Trump ordered Soleimani's killing to distract from impeachment. She’s not the only one saying that. They call this “wag the dog,”  start a war to get distracted from the fact that you're ready to get impeached.

Behar even contemptuously dismissed the danger of Soleimani this way: “Have we seen the intel on this so-called threat?”

Qasem Soleimani was a danger to the United States. So was Ayman al-Zawahiri. The world is a safer place with them gone. Some journalists and media personalities, however, are so blinded by partisanship that they can only be happy when a Democrat gets the applause for killing a terrorist