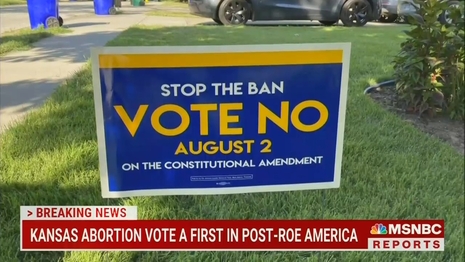 All day on Tuesday, MSNBC journalists excitedly hyped the idea that Kansas pro-lifers might fail. MRC NewsBusters analysts looked at 12 hours of coverage on MSNBC, from 9 a.m. until 9 p.m. Eastern. The liberal cable network portrayed this as the most important story of the day.

That comes out to 65 minutes and 34 seconds. In the 1:00 p.m. Eastern hour, MSNBC contributor (and former Democratic Senator) Claire McCaskill repeated the lie that dogs would be used to sniff out women trying to leave their state for an abortion:

Reasonable people can disagree about parts of the issue of legal abortions. But most Missourians, most Kansans, most Americans want rape victims to be able to terminate a pregnancy.  They don't want dogs sniffing women at airports to see if they are traveling to have an abortion.

This is false. Even outlets like the liberal Snopes have debunked the claim that dogs would be used in states like Mississippi. Here's Snopes: “In sum, we found no evidence whatsoever of any state lawmaker in Mississippi engaging in any such discussion, and in any event, neither the state senate nor the state house have convened since the beginning of April.”

[Passing the ballot initiative] would then put the power to take action on this issue into the hands of the Republican super majority in the state legislature, and it could possibly open the door for them to restrict the procedure or as many activists here are concerned about, ban the procedure outright.

At 7:21 p.m. Eastern, far-left host Joy Reid talked about Kansas for 10 minutes and 51 seconds. She assailed the threat of violent pro-lifers: “Anti-abortion violence is a current domestic terrorism threat that began in the early 1970s. We're talking vandalism, arson, bombing, along with threats of harassment and intimidation.”

The pro-abortion side won in Kansas on Tuesday. But these groups certainly had the excited support of the liberal MSNBC. The network treated Kansas as the most important issue in the world on Tuesday.