STUDY: When There’s a Slaughter, the Press Loves to Blame Conservatives

According to NBC’s Chuck Todd, “the chickens are coming home to roost” when it comes to white supremacy. The New York Times smeared that congressional Republicans “have stoked the beliefs that led to the killing.” CNN’s Brian Stelter said that, in regards to the killing, “you’re talking about the biggest stars on Fox News.” CBS Mornings on Wednesday connected “many conservative politicians” to the views of the racist alleged gunman.

This is something we’ve seen again and again over the decades: An isolated loner or mentally unstable person commits violence and journalists connect it to the broader conservative movement. But when, for instance, a self-described fan of Rachel Maddow attempts to slaughter congressional Republicans at a baseball practice, they downplay connections to the political left.

Here are the most blatant attempts by the liberal media to pretend conservatives are responsible for appalling violence AND their efforts to cover up violence by left-wing extremists. 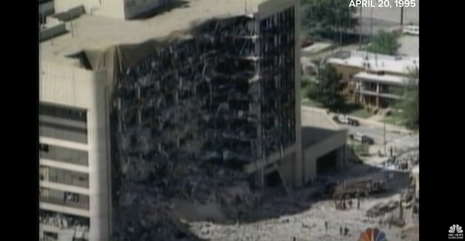 On April 19, 1995, terrorists Timothy McVeigh and Terry Nichols detonated a bomb at the Alfred P. Murrah Federal Building in Oklahoma City, Oklahoma. One hundred and sixty eight people were killed. The networks joined President Bill Clinton in vilifying the right. Time magazine called conservative talk radio an “an unindicted co-conspirator in the blast.”

On the April 25, 1995 Today, then-co-host Bryant Gumbel attributed culpability to Rush Limbaugh, G. Gordon Liddy and Oliver North: “While no one's suggesting that right-wing radio jocks approve of violence, the extent to which their approach fosters violence is being questioned by many observers, including the President of the United States.”

The spring of 1996 saw a wave of church burnings in the south. The Washington Post looked at them in totality and found a pattern of isolated, racist young men, sometimes on drugs. But that didn’t stop Time magazine from unleashing a vile smear, blaming then-presidential candidate Pat Buchanan, Newt Gingrich, and Republicans in general. Here was national correspondent Jack E. White in the March 18, 1996 issue:

The torching of black churches throughout the South punctuates the ugly rhetoric of the [Pat] Buchanan campaign....In fact, all the conservative Republicans, from Newt Gingrich to Pete Wilson, who have sought political advantage by exploiting white resentment should come and stand in the charred ruins of the New Liberty Baptist Church in Tyler [Alabama]...and wonder if their coded phrases encouraged the arsonists.

On May 31, 2009, a man murdered Kansas abortion doctor George Tiller. Prominent pro-life organizations condemned the killing. Yet, the next day, NBC speculated that then-Fox News anchor Bill O’Reilly fueled the killing with “his blunt remarks regarding abortion and Dr. Tiller.”
Then-MSNBC host Keith Olbermann proclaimed a “straight line” from O’Reilly to the shooter.

On June 10, 2009, anti-Semite James von Brunn entered the Holocaust Memorial in Washington D.C. and murdered a police officer. Rather than put the blame solely on the disturbed individual, a man with a history of arrests for kidnapping, hostage-taking and other crimes, MSNBC waited just hours to slime talk radio. On that night’s Hardball, journalist Joan Walsh connected, “There is a very disturbing and disturbed element of political discourse. And I would throw in Rush Limbaugh.”

“We don’t have proof yet that this was political, but the odds are that it was. She’s been the target of violence before.... She was on Sarah Palin’s infamous ‘crosshairs’ list.... You know that Republicans will yell about the evils of partisanship whenever anyone tries to make a connection between the rhetoric of Beck, Limbaugh, etc. and the violence I fear we’re going to see in the months and years ahead.”

It would turn out that Loughner had previous offenses for drug possessions and believed in conspiracy theories about the gold standard and mind control. Yet, for years, media outlets tried to connect conservatives to the killing. In 2017, The New York Times falsely wrote in an op-ed: “The link to political incitement was clear...Sarah Palin’s [PAC] circulated a map of targeted electoral districts that put Ms. Giffords and 19 other Democrats under stylized cross hairs.”

As NewsBusters Executive Editor Tim Graham wrote in a January 26, 2022 column: “This was deeply wrong, and it wasn’t an innocent mistake. The Times itself had reported this was untrue! Loughner wasn’t motivated in any way by Sarah Palin or her map. The map merely suggested that 20 Democrats who voted for Obamacare should be defeated in the next election.”

On July 20, 2012, James Holmes massacred 12 people at a midnight movie theater screening. Hours later, ABC’s Brian Ross appeared on Good Morning America and said, “There is a Jim Holmes of Aurora, Colorado page on the Colorado Tea Party site as well. Talking about him joining the Tea Party last year. Now, we don't know if this the same Jim Holmes.” It wasn’t.

ABC President Ben Sherwood later apologized for the comment, but Ross wasn't shown the door until 2018 for mangling the facts on an unrelated story.

After an anti-Semitic terrorist entered a Pittsburgh, Pennsylvania synagogue and murdered 11 people on October 27, 2018, CNN’s Brian Stelter brought on Bill Kristol to blame Donald Trump: “Can we talk about the fact he's helped create an environment that made this possible?” The Washington Post’s Margaret Sullivan said the killer’s target list “reads like a list of Sean Hannity’s pre-broadcast crib notes.”

How do journalists react when there are violent acts or murder by individuals connected to left-wing causes or celebrities? They quickly change the subject. Here are some recent examples:

Attack on the Family Research Council (2012)

On August 15, 2012, Floyd Lee Corkins entered the FRC lobby and shot a security guard. He chose his target from a Southern Poverty Law Center so-called “hate map.” Corkins was an LGBTQ volunteer and, according to CNN, he planned to rub Chick-fil-A sandwiches in the dying faces of staffers he expected to kill. NBC did one story on it. The networks never covered his trial, conviction and sentencing to 25 years in prison.

On July 7, 2016, Micah Xavier Johnson ambushed a group of police officers in Dallas, Texas, shooting and killing five officers, and injuring nine others. Johnson said he was upset about police shootings of black men and tried to join Black Lives Matter organizations. MSNBC’s Brian Williams the next day brought on a guest to spin that Black Lives Matter protests “have never been anti-police.”

CBS This Morning co-host Gayle King on July 12, 2016 attempted to contain the damage: “The thing they wanted to stress most is that Black Lives Matter didn’t have anything to do with the shooting....the shooter was someone who had nothing to do with the cause and has sort of tainted the movement...”

On June 14, 2017, left-wing political activist James Hodgkinson opened fire at a GOP congressional baseball practice, almost killing Congressman Steve Scalise. Before the attack, in a series of letters to a local Illinois newspaper, Hodgkinson declared, “One of my favorite TV shows is The Rachel Maddow Show on MSNBC.”

His affinity for the liberal host was not mentioned on ABC, CBS and NBC. However, a somber Maddow addressed the killer’s fandom for her on June 14, 2017. She defensively noted, “I should tell you we went through our correspondence today as soon as we got his name, as soon as we got that detail about him. We didn’t find evidence he ever sent anything to this show or tried to contact us at all.”

Hodgkinson’s support for Bernie Sanders was mentioned on the networks for a day then dropped.

Attack on the Capitol and murder of a police officer (2021)

On April 2, 2021, Noah Green drove his car into a barricade at the Capitol in Washington D.C. and then stabbed a police officer to death. He was a black nationalist and follower of the radical Louis Farrakhan. There were three quick mentions of Farrakhan and Green’s motive. But by three days later, the networks had totally dropped the story.

On May 7, 2012, a radical pro-abortion group firebombed a pro-life organization in Madison, Wisconsin. The networks allowed just 77 seconds. There was no attempt to blame the pro-abortion left.

If you needed additional proof of a corrupt media, this should be it. Any time there’s an opportunity to exploit a tragic outburst of violence, journalists jump at the opportunity to blame conservatives and Republicans. But when a killer has a left-wing background or appears to draw inspiration from powerful liberal figures, these same media personalities bury the connections.

Violent killers are responsible for the actions of violent killers. And unless there is direct, reliable proof connecting violence to politics, it’s time for our media to stop slandering those they disagree with as somehow part of the death and destruction.