CNN+ Was More of a DISASTER Than You Knew: As Little as 5000 Viewers at 'Any Given Moment' 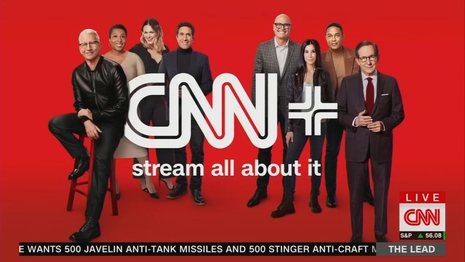 The Wall Street Journal on May 13 conducted an excruciating deep dive on the disaster that was CNN+. The key takeaway: It was even worse than anyone thought. At any one time, there were as few as 5000 people watching. That's in a country of 329 million.

The Journal’s Lillian Rizzo explained in a scoop: “The chief executive of the newly formed Warner Bros. Discovery, David Zaslav, decided to end CNN+ after learning the $5.99-a-month service signed up roughly 150,000 subscribers in its first few weeks and was being watched by somewhere between 5,000 and 10,000 people at any given moment, people familiar with the situation said.”

How delusional does that make CNN? In a March 2022 pitch, the network predicted that 29 million “super fans” could pay to watch them.

Also, in a final indignity, CNN+ sent swag packages to new employees... after they were laid off and the streaming channel imploded. Here’s Rizzo recounting the popcorn makers and other CNN+ gear they received after the bad news:

A week later, several of those staffers received packages from CNN: boxes filled with network-branded gear, from pens to food containers, as well as items such as a popcorn maker and headphones, people who received the gifts said.

Some came with welcome notes. “This is an incredible time to be part of CNN,” one note said. “Build relationships and take time to connect with colleagues and learn so that you make the most of your time here.”

The ill-timed gifts, which CNN says were sent mistakenly, were another gut punch for staffers that had bet on CNN+—drawn by the promise of growth in streaming—only to watch it collapse in epic fashion.

If you are looking to remember the CNN+ weeks, try eBay. A quick search finds that you can by a “CNN+ Plus Defunct Failed Company” mug for just $16.95. (Less than the cost of three months of CNN+. If CNN+ had lasted three months, that is.) No popcorn maker yet, but check back in a few weeks.

Finally, the WSJ reported that new CNN president Chris Licht didn’t want his first meeting with CNN+ staffers to be their firing. So he went and met with them. Two days later, Licht dropped the ax.

Warner Bros. Discovery completed plans to shut down the service on April 14, a person familiar with the decision said. Mr. Licht wasn’t slated to take over at CNN for another few weeks. He was aware plans were being drawn up to make the shutdown announcement and didn’t want that to be his first interaction with CNN+ staffers, the person said. He went to the CNN+ office on April 19 and walked around shaking people’s hands, making small talk and mentioning that his wife worked at CNN for years, people who attended said.

NewsBusters chronicled every moment of the CNN+ era. (If you can call 32 days an “era.”)

Things that lasted longer than CNN+? New Coke, Tom Brady’s retirement and carrots stored in the fridge, among other things.

CNN+, it gets worse the more you hear about it. We'll let you know if the popcorn maker turns up on eBay.