In a desperate new low, the White House on Monday used the Easter Bunny to protect the unpopular Joe Biden from any potentially difficult questions from the press. The bunny, who was actually a White House staffer in costume, whisked Biden away from questions about foreign policy.

But the networks on Monday night through Wednesday morning totally ignored this bizarre, embarrassing moment during the traditional Easter Egg roll. On cable, Fox News covered the White House using a fake rabbit to play defense.

Unlike the disinterested ABC, CBS and NBC, the New York Post exposed the incident:

A staffer dressed in an Easter Bunny costume intervened Monday to stop President Biden from answering a reporter’s question on the White House lawn.

Biden, hosting the first White House Easter Egg Roll of his presidency as the COVID-19 pandemic wanes, began to answer Afghan reporter Nazira Karimi’s inquiry before the bunny showed up and cut him off.

White House press official Meghan Hays seemed to step forward as the disguised official, tweeting a photo of herself in the bunny suit with Biden and first lady Jill Biden. The photo appeared to have been taken either just before or after the group took part in the event. 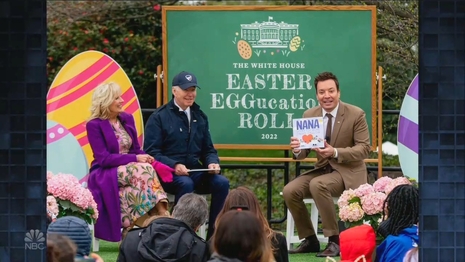 On Monday’s Tonight Show, Jimmy Fallon talked about being part of the Easter Egg roll. Yet on that night's show, he made no mention at all of the President needing to be saved by a pretend rabbit.

This is quite a contrast to when Donald Trump was Easter Bunny-adjacent in 2019. On April 22, 2019, reporters screamed impeachment questions at the same event he stood with a costumed bunny.

On April 23, 2019, Today’s Peter Alexander recapped: “Earlier in the day, the President brushing off the prospect of impeachment at the annual White House Easter Egg Roll.”

At the event, his NBC colleague Kristen Welker yelled, “Are you worried about impeachment, Mr. President?” On CBS This Morning, Nancy Cordes gushed over the confrontation at the Easter event: “But even as President Trump shrugged off the notion at the White House Easter Egg Roll, the chair of the House Judiciary Committee, Jerry Nadler, was issuing yet another subpoena.”

How bad are things going for Biden? Now the Easter Bunny has joined journalists in attempting to protect him.