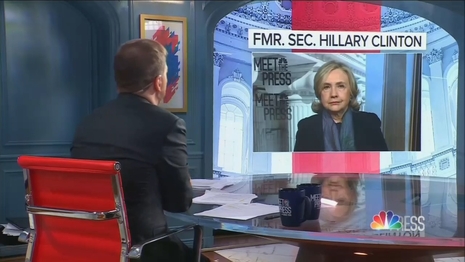 It’s not just Hunter and Joe Biden that the networks are desperately scrambling to protect. ABC, CBS and NBC are doing their best to shield Hillary Clinton’s campaign from fallout over the debunked Steele dossier.

The New York Post and other outlets reported almost two weeks ago that “the Federal Election Commission has fined both Hillary Clinton’s 2016 presidential campaign and the Democratic National Committee for lying about how they spent money used to fund the now-debunked Steele dossier on former President Donald Trump.”

Yet, you wouldn’t know it on the networks. There’s been no direct mention of it since the March 30 announcement. This is despite an 11 minute and three second interview with Clinton on the April 3 Meet the Press.

Instead, anchor Chuck Todd kept the focus on the danger Democrats face in the fall: “I`m curious... a lot of speculation is that this trouble for President Biden politically started with the chaotic withdrawal in Afghanistan. Do you buy that?”

The Clinton campaign and the DNC will be forced to pay $8,000 and $105,000 respectively for mislabeling payments that ultimately went to Fusion GPS, the consulting firm that commissioned the dossier, according to FEC documents viewed by the Post.

The Clinton campaign and the DNC paid more than $1 million combined to powerful Democratic law firm Perkins Coie, which engaged Fusion GPS to dig for dirt on Trump. Fusion GPS, in turn, hired former British spy Christopher Steele — whose namesake dossier included allegations that Russian security services possessed a tape of Trump in a Moscow hotel room with prostitutes who were supposedly urinating on a bed where the Obamas had previously stayed.

The lone exception where Clinton’s name even came up in the ballpark of discussion came on the April 3, 2022 edition of This Week. And that was from Republican Chris Christie. The fine wasn’t mentioned, but Christie told anchor George Stephanopoulos journalists were “dead wrong.”

Here’s an exchange from This Week on the Steele dossier. Click “expand” to read more.)

CHRIS CHRISTIE: But, look the idea that somehow, when making the Hunter Biden decision in the midst of an election campaign, we're saying, “Oh, we got to be careful about Russian disinformation, but all through 2016 and 2017, we now know that it was the Hillary Clinton campaign that was creating that dossier, paying for it, and that became the basis of a New York Times Pulitzer Prize. And it turned out to —

GEORGE STEPHANOPOULOS: Oh, there's a separate FBI investigation based on completely different evidence being generated at that time.

CHRISTIE: But, no, but, but George, no, no, no. George, look, Operation Crossfire Hurricane was all about the potential infiltration of the Trump campaign by the Russians. The basis of that was the dossier.

For over 259 days, the network evening newscasts avoided even saying the name “Hunter Biden” so it’s not surprising that they are attempting to hide ABC, CBS and NBC’s attempts to protect the lies of Clinton, another Democratic powerhouse in trouble.