The Nets Weren’t as Excited for Historic Condi Rice, Warned of Her ‘Hard-Right’ Turn 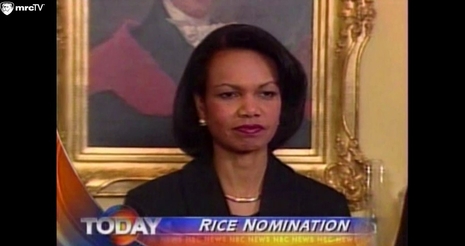 All three networks on Friday praised the confirmation of Ketanji Brown Jackson, the first female African American on the Supreme Court, as “history made” and “an inspiration for everybody in this country.”

And while all Americans should rightly be proud of another racial barrier falling, liberal journalists were not as excited when Condoleezza Rice became the first female African American Secretary of State.

The newly reelected George W. Bush officially nominated Rice on November 16, 2004. On that day’s Today show, not-yet-disgraced host Matt Lauer opened the show not with history, but by fretting: “Rice in the pressure cooker. President Bush is expected to nominate his National Security Advisor Condoleeza Rice to replace Colin Powell as Secretary of State.... Does her nomination mean that U.S. foreign policy will take a hard right turn?”

Fill-in World News Tonight anchor Charlie Gibson allowed one sentence to history on November 16, 2004, noting, “She would be the first African-American woman in American history to fill the post.”

But he spent more time worrying about whether Rice — a former Stanford professor and foreign policy expert — would be too loyal and not an independent thinker: “Rice is one of the President's most loyal confidantes, a woman said to be so in sync with Mr. Bush, she can finish his sentences. But there are questions about whether the President runs a risk in surrounding himself with so many people who share the same world view.”

Rice's nomination caps a stellar rise from her roots as the granddaughter of a poor Alabama cotton farmer. She was a Soviet specialist for the first President Bush, provost of Stanford University, competitive skater, and concert pianist.

When Rice was actually sworn in, on January 26, 2005, there was little fanfare. Only the January 28 CBS Early Show bothered to note it:

SUSAN McGINNIS: Secretary of State Condoleezza Rice is officially on the job. At a welcoming ceremony yesterday, Rice told employes that her last State Department job had a much lower profile.

CONDOLEEZZA RICE: But I was, in 1977, an intern in the Bureau of Educational and Cultural Affairs. Now there's a lesson in that: be good to your interns.

MCGINNIS: Rice also said the State Department must take the lead to carry out what she called the president's bold agenda for foreign policy.

The fact that Ketanji Brown Jackson is the first African American Supreme Court Justice should be acknowledged as yet-more progress for the United States. But liberal journalists aren’t as excited when conservative minorities — like Condoleezza Rice — break barriers.