Radical Congresswoman Ilhan Omar is at it again. The Democrat on Sunday called the U.S. hypocritical in terms how it deals with Ukrainian refugees vs. countries like Syria and Central America. She also appeared way out of step with most Republicans and Democrats, decrying “disastrous” military aide to Ukraine.

Yet on the networks? Crickets from them as they ignore the potentially embarrassing comments from the hard-left Democrat. But this is a pattern for ABC, CBS and NBC.  Omar’s past hateful, bigoted and anti-Semitic comments get buried by the same journalists who initially promoted her.

On Sunday, while talking to Ali Velshi on MSNBC, Omar used the war in Ukraine to complain the U.S. isn’t doing enough elsewhere.

Our language, our rhetoric, our policies in dealing with refugees has to change. The United States is committing to now having temporary protective status up to 18 months for Ukrainians. And, we are hopefully going to lift the refugee quota, so that we can bring in Ukrainian refugees. And, I just hope that, you know, when we are thinking about Syrians, and folks from Afghanistan, and south and Central America, our rhetoric will hopefully also shift. There are countries like Yemen, and Ethiopia that are currently experiencing devastation, and we haven't seen the kind of care and compassion that is being used to talk about these particular refugees for those refugees who are also experiencing devastating situations as well.

On Tuesday, she tweeted opposition for military support for Ukraine: 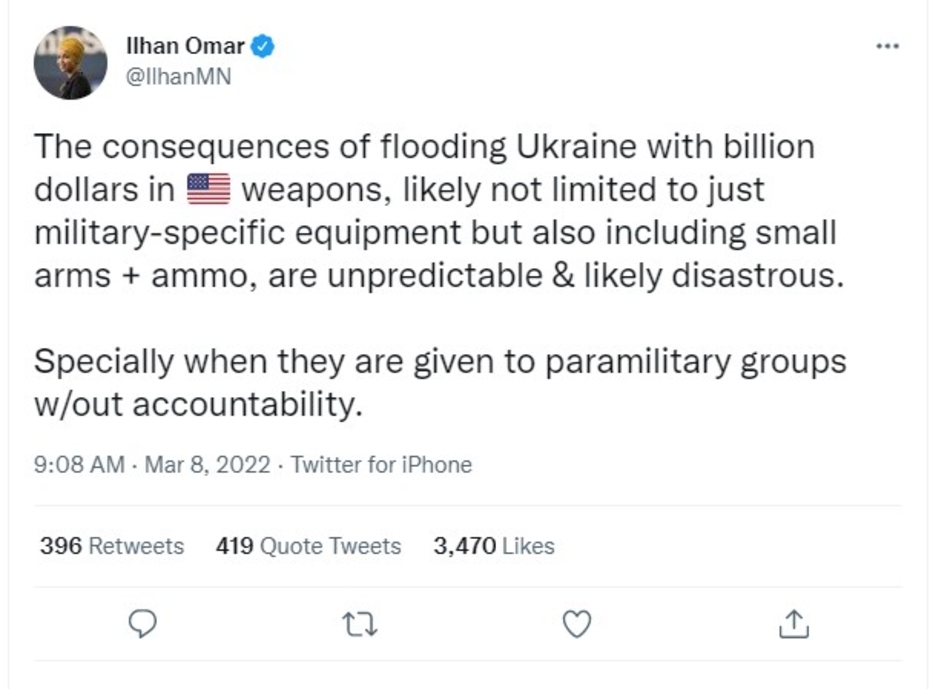 This puts her out of step with — not just Democrats — but the American people. Seventy two percent of the country supports providing Ukraine with weapons. As Mediaite’s Jackson Richman pointed out, she said the same thing last month.

In June of 2021, Omar tweeted anti-Semitic attacks that compared the U.S. and Israel to Hamas and the Taliban. And in a now-deleted tweet from 2012, Omar spewed this hate: “Israel has hypnotized the world. May Allah awaken the people and help them see the evil doings of Israel.”

ABC ignoring the latest from Omar was sponsored by Old Navy. On CBS, it was Progressive insurance. On NBC, it was Uber. Click on the links to let them know what you think.