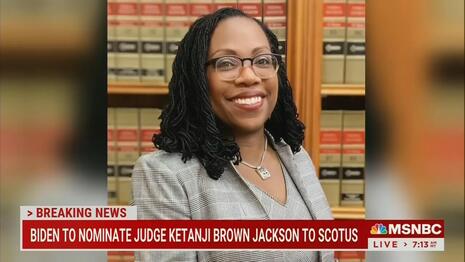 The disingenuous ideological spin has already begun. Just minutes after the White House on Friday confirmed that Ketanji Brown Jackson is Joe Biden’s pick for the Supreme Court, MSNBC deemed her a “middle of the road” “home run.”

This attempt to turn the deeply liberal Jackson into a moderate was too much even for The Washington Post. The paper stated the obvious: “She would be likely to vote with liberals.”

Yet one of the first guests MSNBC brought on for reaction was Harvard Law Professor Tomiko Brown-Nagin. She insisted, “I think it is a home run. She's highly qualified. She is a known quantity. I don't think it is going to be easy to characterize her as a radical as some started trying to do even before a nominee was announced and she's a terrific choice.”

Brown-Nagin then adopted the strategy used for every very liberal Supreme Court nominee: Pretend they aren’t. She claimed, “I see her as a middle-of-the-road candidate, highly qualified and she's been twice confirmed by the Senate.”

That’s not what even The Washington Post thinks. Regarding Friday’s announcement, the paper acknowledged:

Jackson’s confirmation would not affect the current conservative 6-to-3 supermajority on the court. She would be likely to vote with liberals on the most contentious issues facing the Supreme Court, including affirmative action, abortion, LGBTQ protections and gun rights.

The radical pro-abortion NARAL “applauded” her confirmation to the U.S. Court of Appeals. According to The Federalist:

...The Breyer apprentice penned an amicus brief for the National Abortion Rights Action League (NARAL), and other organizations that kill babies in the womb, in support of a Democrat-backed law that prevented pro-life protesters from congregating outside abortion facilities.

In an earlier hour, host Chris Jansing seemed to vaguely concede just how liberal Jackson is. She wondered, “We talk about the whole idea of judicial temperament and she'll be going into a court that will continue to be dominated by the conservative wing.”

The ideological spin on MSNBC was sponsored by Chevron. Click on the link to let them know what you think.

CK HOFFLER (National Bar Association former president): Exceptionally qualified candidate, stellar background and reputation who already has the judicial temperament to be able to ascend to the U.S. Supreme Court, taking her proper place if confirmed. And I have no question that she'll be confirmed. On all fronts, when you have that box that you check, she's exceptional. But her background is what makes us very proud that she is a nominee.

TALI FARHADIAN WEINSTEIN (MSNBC legal analyst):  But interestingly, while she brings that diversity, Chris, she's out of central casting in terms of her credentials. She lacks absolutely nothing. She has everything from experience at the Supreme Court to inside the courtroom to on an appellate court. She has nine years of judicial experience.

CHRIS JANSING:  Finally, Joyce, we talk about the whole idea of judicial temperament and she'll be going into a court that will continue to be dominated by the conservative wing. Having said that, in terms of being able to form relationships the way Stephen Breyer had, having served under Stephen Breyer, how do you see her, assuming she is confirmed, operating within the Supreme Court as it is now?

JOYCE VANCE:  It's a really important question, Chris. Will she shift the dynamic on this conservative 6-3 Supreme Court. One of the challenges the court has faced in the past months has been flagging public confidence in the court. As the justices like to say, they don't have an army to enforce their opinion. They depend on the press and depend upon public confidence in the court to give meaning to their words. So they will likely be the happiest people about this morning's announcement.

VANCE: I don’t mean to be pollyannaish about this. We know the 6-3 majority is locked in and that will not shift with her appointment.

JOSE DIAZ-BALART: Tamika, what do you make of the President's decision to nominate judge Jackson?

TOMIKO BROWN-NAGIN (Harvard Law School Professor): I think it is a home run. She's highly qualified. She is a known quantity. I don't think it is going to be easy to characterize her as a radical as some started trying to do even before a nominee was announced and she's a terrific choice.

DIAZ-BALART: Tell me when you say that it is going to be tough for people to criticize her, what do you mean by that?

BROWN-NAGIN: Well, I mean of the opinions that she's written that I have reviewed, they are notable for being even handed for being extraordinary thorough for following the letter of the law, for instance, in the opinion regarding the subpoena for Doug McGahn, she is only validating the principle of limited government, which is fundamental of course to our constitutional system. I see her as a middle-of-the-road candidate, highly qualified and she's been twice confirmed by the Senate. There is every reason to believe that if the senators focus on her qualifications that she should garner bipartisan support.