Don’t look to Chuck Todd to speak truth to a swearing Joe Biden. The MSNBC journalist on Tuesday offered no response to the President lashing out at Fox reporter Peter Doocy as a “stupid son of a bitch.” He tweeted nothing about it. This is quite the contrast from when then-President Donald Trump spewed his own vulgarity in 2018.

In March of that year, Trump called the Meet the Press anchor a “sleeping son of a bitch” at a rally. Appearing on Washington D.C.’s local NBC 4 on March 11, 2018, Todd stood on principle, saying “I bring my kids up to respect the office of the president.” He also offered the unlikely claim that, “in my house,” one “doesn’t speak ill of the sitting president.”

I bring my kids up to respect the office of the President and the presidency. I don’t allow them to say anything negative, ever about the President. Him doing that, it creates a challenge to all parents when he uses a vulgarity like that when plenty of us are trying to do — I was raised. I sort of have the military rule in my house. You don’t speak ill of a sitting president.

As a reminder, Todd's wife, Kristian Denny Todd, is active in Democratic Party campaigns and co-founded a PR firm that worked with Bernie Sanders. So it's hard to imagine there's no speaking ill of GOP presidents in their household.

Now, it’s true that Trump unloaded public vulgarities much more frequently than Biden. Also, what he said was about Todd. But on MTP Daily  Todd has nothing (so far) to say about the January 24th exchange between Biden and Doocy:

DOOCY: Do you think inflation is a political liability going into the midterms?

BIDEN: [Sarcastically] No, it’s a great asset. More inflation. What a stupid son of a bitch.

Back in 2018, Todd tweeted this snarky reply to Trump calling him a “sleeping son of a bitch.” 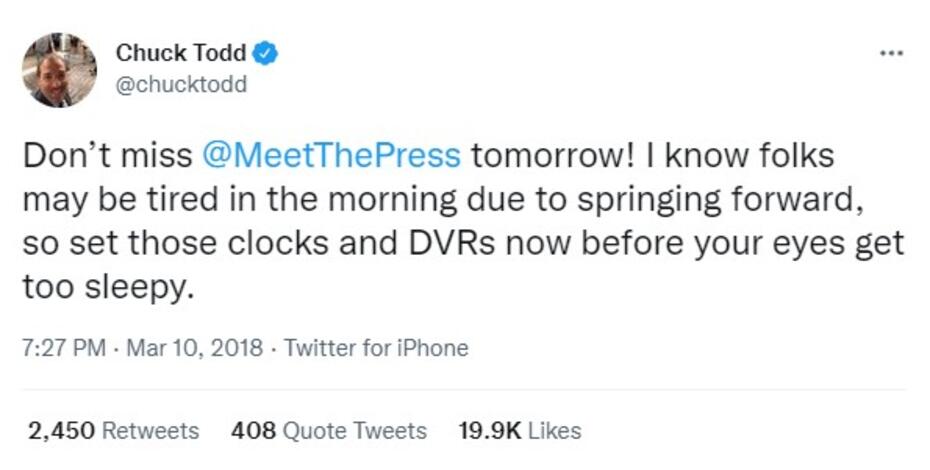 In 2022, he’s tweeted nothing critical about Biden’s swearing at a Fox reporter. (In fact, he’s tweeted nothing at all since December 21, 2021.) In contrast, Jake Tapper of CNN did speak out, telling Jimmy Kimmel on January 24, “I don’t think any president should be calling any journalist a dumb son of a bitch. To be fair to Peter Doocy, the question was fairly anodyne.”