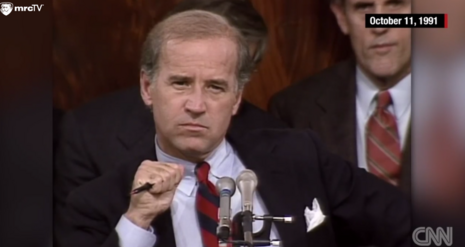 It was 30 years ago today that Clarence Thomas demolished the left — and the liberal media’s — attempt to destroy him, condemning smears as a “high tech lynching.” On October 11, 1991, the then-Supreme Court nominee finally got to speak for himself and respond to the charges that he sexually harassed Anita Hill. It was a moment of high drama when the conservative icon called out his attackers.

After unceasing vitriol by journalists and politicians like Joe Biden, Thomas blasted back at the process, calling out the left’s “high tech lynching” against “uppity blacks who in any way deign to think for themselves.” One of the targets hit by the devastating reply was Biden himself, then a Senator and Committee Chairman. Here’s Thomas:

And from my standpoint as a black American, as far as I'm concerned, it is a high-tech lynching for uppity blacks who in any way deign to think for themselves, to do for themselves, to have different ideas, and it is a message that unless you kowtow to an old order, this is what will happen to you. You will be lynched, destroyed, caricatured by a committee of the U.S. -- U.S. Senate, rather than hung from a tree.

Thomas's stand clearly hit home, convicting both the press and leaders of the smear like Biden. PBS journalist Judy Woodruff whined about the conservative judge’s dramatic testimony: “Thomas continued to lash out throughout his testimony.” She then played video of a wounded Biden later in the hearings rambling about “anybody who runs for the Supreme Court.”

I’m getting fed up with this stuff about how terrible this system is. I hear everyone talk about how terrible the primary system is. We’re big boys. I knew when I ran for president everything was free game. Anybody who runs for the Supreme Court, or is appointed to the Supreme Court to be more precise, should understand. This is not Boy Scouts. This is not Cub Scouts.... Whoever goes to the Supreme Court is going to determine the fate of this country more than anybody for the next 20 years. We’re going to have people, scrupulous and unscrupulous respond and react. Judge, this is less directed at you than it is my pontificating colleagues, Democrat and Republican alike. So, judge, I have not made my judgement based upon this proceeding because we have not heard all the evidence.

Biden's call for Thomas to stop complaining is a contrast to when he was accused of sexual assault by Tara Reade in 2020. Then, the Democratic presidential nominee had a compliant press to defend him.

For years, haters would continue to slime Thomas with awful comments. In 1994, then-USA Today columnist Julianne Malveaux offered this vile attack: "I hope his wife feeds him lots of eggs and butter and he dies early like many black men do, of heart disease.” But 30 years ago today, Thomas showed he would never be the victim of the hateful left and their allies in the press.

For more on the liberal media’s attempts to smear Clarence Thomas 30 years ago, go here.