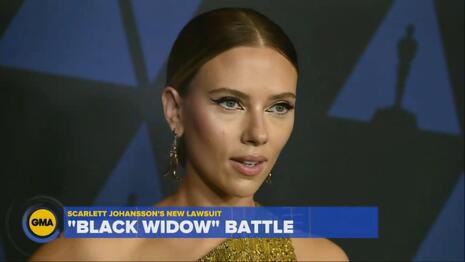 The next time you hear the journalists at ABC complain about corporate interference in big business, or mock Fox News as under the thumb of the GOP, remember that ABC “News” seems to exist to shill for the network’s overlords at Disney. On Friday, Good Morning America took their bosses side in the fight against Black Widow star Scarlett Johansson.

The long-time Marvel actress is suing Disney for violating her contract and releasing Black Widow in a hybrid Disney+/theatrical format. Most experts believe this severely harmed the film’s box office totals. But reporter TJ Holmes began by reminding everyone just how wealthy Johansson is: “We are talking about one of the highest paid actresses in the world saying she's not getting paid enough for her latest movie Black Widow.”

He then hyped his Disney's position: “What we have here is essentially a pandemic created labor dispute where the studios are trying to adjust to new realities putting the movies on streaming and get them to viewers who might not be comfortable going to a theater.”

But...it’s not a hit. The film’s worldwide gross is $319 million (according to Box Office Mojo). The budget was over $200 million (and that’s not accounting for extra marketing costs due to Covid). As Screen Rant explained:

Going by the general rule of thumb (production budget x 2 = break even point), Black Widow would need to gross about $400 million worldwide to make its money back. However, in this case, it's likely a bit more. Black Widow already had a very visible marketing campaign prior to the pandemic, complete with a pricey Super Bowl TV spot. It's unknown how much money exactly Disney spent on advertising, but the numerous delays probably spiked the costs a bit, since they essentially had to put together multiple campaigns. There obviously wasn't another Black Widow Super Bowl commercial this year, but Disney still had to do their part to raise awareness and generate hype for the movie, especially after it was pushed back so many times. It wouldn't be surprising if Black Widow's break even point was closer to $500 million.

Why does all this matter? ABC has repeatedly morphed its news department into a PR campaign for Disney. Co-host Robin Roberts cheered on July 8: “We are counting down to Black Widow finally hitting theaters tomorrow. It is one of the most eagerly anticipated movies of the summer!” The show even included a countdown clock.

In November of 2019, GMA devoted 17 minutes to Disney+. Roberts enthused, “Christmas coming early for everyone!” In September of 2020, ABC relentlessly promoted Mulan, but buried the fact that the movie filmed near brutal Chinese concentration camps.

In fairness, Holmes acknowledged on Friday that "[t]he artists say this is now robbing them of theatrical glory and maybe a lot of money." He also quoted from Johansson's lawyer. But the overwhelming tone was pro-Disney.

So the next time someone tells you to take the liberal ABC News seriously, remember they exist to do the bidding of Disney+.

The corporate whoring for Disney bosses was sponsored by Allstate and Macy’s. Click on the links to let them know what you think.

JOHNSON: We do want to turn to that box office battle. Black Widow star Scarlett Johansson now suing Disney over the release of the hit Avengers spin-off on Disney+. T.J. is back with more on that.

TJ HOLMES: We are talking about one of the highest paid actresses in the world saying she's not getting paid enough for her latest movie Black Widow. That's according to this lawsuit. What we have here is essentially a pandemic created labor dispute where the studios are trying to adjust to new realities putting the movies on streaming and get them to viewers who might not be comfortable going to a theater. The artists say this is now robbing them of theatrical glory and maybe a lot of money. Avengers star Scarlett Johansson gearing up for another battle. This one in a courtroom.

HOLMES: The actress has sued the Walt Disney company over the way the company chose to release her latest film, Black Widow alleging a breach of contract.

ELIZABETH WAGMEISTER (Senior correspondent, Variety): With the pandemic everything has changed so Black Widow was released simultaneously in theaters and on Disney+

HOLMES: The lawsuit filed Thursday says, “with the bulk of Ms. Johansson's compensation being tied to box office receipts, Disney knew that the cannibalization of such receipts by Disney plus would save marvel and by extension Disney very large amounts of money that it would otherwise owe Ms. Johansson,” adding “her team's attempts to reach an understanding were ignored.”

HOLMES: The film broke pandemic era records and it's brought in over $300 million worldwide. Millions more from streaming on Disney+. But The Wall Street Journal reports the actress may have lost out on more than $50 million in revenue that could have been generated by the movie's success. In a statement to ABC News, Johansson's attorney writes, “It's no secret that Disney is releasing films like Black Widow directly on to Disney plus to increase subscribers and thereby boost the company's stock price and that it's hiding behind Covid-19 as a pretext to do so.” Disney fired back saying, “There is no merit whatsoever to this filing. The lawsuit is especially sad and distressing in its callous disregard for the horrific and prolonged global effects of the Covid-19 pandemic. Disney has fully complied with Ms. Johansson's contract and furthermore the release of Black Widow on Disney plus with premier access has significantly enhanced her ability to earn additional compensation on top of the 20 million she has received to date.”

WAGMEISTER This is probably the tip of the iceberg, not just for the Walt Disney company, but for every single major Hollywood studio.

HOLMES: This is an 11-year relationship, eight movies she made that made billions but this was expected to be the last time to see her as Black Widow. These back end deals reportedly you remember when Robert Downey Jr .  made 75 million for one Avengers movie. If you negotiate a little percentage, then the movie makes 2 billion. 2.7 billion. You are going to rake in some cash and that's part of the argument if it had gone to the theaters, exclusively, Black Widow she would have gotten a bigger paycheck so this is not the last we'll hear of it.