So NOW the Partisan Hacks at CBS Think Texas Is ‘Playing Politics’ With the Border?

The partisan journalists at CBS This Morning on Thursday discovered the problem of “playing politics.” Of course, they aren’t admitting bias. They are mad at Greg Abbott as the Texas Governor is going to spend state money to extend a wall on the state’s southern border. The partisans at CBS weren’t happy. Co-host Anthony Mason began the segment this way: “Critics of Texas Governor Greg Abbott say he's playing politics with his proposal that the state build its own border wall.”

Reporter Mireya Villarreal responded with the proper liberal talking points, deriding Abbott: “A lot of people feel like this is a political move, and that is very frustrating to the people we have talked to down on the border that are already exhausted by this immigration politics.”

As if CBS journalists hadn’t underlined their objections, Villarreal asked the Republican at a press conference: “How do you respond to people who say this is more of a political ploy?”

The journalist talked to Patrick Svitek of the Texas Tribune to find another journalist echoing her complaint: “[Svitek] says Abbott may have his eyes on a presidential run in 2024. Is this about bigger aspirations, bigger political aspirations?”

Get it? When Republicans enact policy that’s popular in their state, it’s always “political.” Yet when Joe Biden’s border crisis exploded in March, CBS This Morning journalists worried it was “distracting” from his Covid success. CBS reporters are the real partisans.

The partisans at CBS complaining about partisanship was sponsored by Allstate and American Express. Click on the links to let them know what you think. 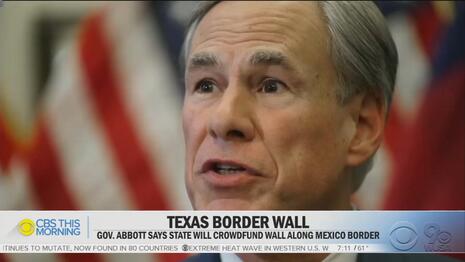 ANTHONY MASON: Critics of Texas Governor Greg Abbott say he's playing politics with his proposal that the state build its own border wall. Yesterday he said Texas would spend $250 million on a down payment for the project. But the governor's plan announced at the state capitol is still light on specifics. It's not clear if it's legal. Mireya Villarreal is in Austin. Mireya, the federal government originally estimated its border wall would cost more than $21 billion. So can the state afford this?

MIREYA VILLARREAL: Well, good morning, Anthony. Right now, the Governor just didn't have those details. He doesn't really know how long the project will take. He doesn't know how much it will cost right now. And really he doesn't know exactly how much of the wall can actually be built here in Texas. What he does know is that in addition to that $250 million taxpayer dollars that they've already set aside, they will also crowd source this wall. They're asking people to send in donations here to the state capitol in Austin. As you said, a lot of people feel like this is a political move, and that is very frustrating to the people we have talked to down on the border that are already exhausted by this immigration politics.

REYNALDO CAVAZOS ANZALDU: I'm 76 years old. And I've seen migrants all of my life coming through.

VILLARREAL: The Cavazos family has owned this land along the Texas/Mexico border for generations. When we visited Rey Cavazos Anzaldua in 2019, they were battling the federal government to keep their land intact. Since then they've lost six and a half acres.

ANZALDU: It's very easy to be in your living room and say build the damn wall. They're not losing anything. We're losing.

VILLARREAL: On Wednesday, Texas Governor Greg Abbott demanded the federal government return land that was supposed to go toward Trump's now-defunded federal wall so Texas can use that land and build a wall of its own.

GOVERNOR GREG ABBOTT: The federal government has a legal responsibility under the federal immigration laws to do it. But because they are not doing it, Texas taxpayers are having to step up so that we as a state can protect our citizens.

PATRICK SVITEK (Texas Tribune reporter): He sees a real opportunity here to be a national Republican leader on this issue.

VILLARREAL: Patrick Svitek covers state politics for the Texas Tribune. He says Abbott may have his eyes on a presidential run in 2024. Is this about bigger aspirations, bigger political aspirations?

SVITEK: I think what today was about was him taking his most drastic action yet to show to Republican primary voters that he is the person who wants to in some ways continue the legacy of Donald Trump.

VILLARREAL: In four years, the Trump administration only managed to build 52 miles of new structures on the border with some sections costing as much as $46 million per mile. How do you respond to people who say this is more of a political ploy?

ABBOTT: Anyone who thinks this is politics doesn't have a clue what's going on the border.

ANZALDU: It's political theater. Not for open borders. The problem is in the United States. Until you can reduce the demand for illegal immigration and illegal drugs, this is going to continue.

VILLARREAL: Not only are the details of this particular project skill very unclear, but so is the legal aspect of all of this. The Biden administration defunded the federal wall program just last week. And right now it seems like Governor Abbott's plan is direct contrast to federal immigration laws. We have spoken with legal experts that say in the past the Supreme Court has highly sided with the federal government when it comes to immigration enforcement.