Scream and Tremors star Jamie Kennedy has been acting in Hollywood for decades, but he seems to have hade enough of the elitist, out of touch nature of the liberal town. Appearing Saturday on Fox News, the actor derided the bubble “echo chamber” that is closing off Los Angeles from the rest of the country.

Kennedy, who is appearing in his first conservative-leaning film, Roe v. Wade, dropped some truth while speaking with FNC host Jesse Watters: “I think Hollywood is operating within its own echo chamber. Look, I love it. I've been lucky to be a part of it for 30 years, but it's being more and more -- how can I say -- I feel like it's almost making content for itself.”

Kennedy, who tours as a stand-up comedian, warned Hollywood: “I go out in the middle of America, all around, people are like, ‘I didn't see that movie either.’ So I am starting not to know all the movies that are in, and I've got the screeners so, the circle is closing.”

In a piece on Hollywood in Toto, Kennedy talked about whether he considered the political implications of appearing in the abortion film Roe v. Wade:

“I did,” Kennedy admits. “But I thought, there’s all types of people in Hollywood… There’s a lot more people that have some conservative views [in the industry] but just don’t talk about it. They keep their heads in the sand. They’re scared of being shamed and stuff. I’ve never seen it this wild, this polarized.”

[Radio host Lars] Larson asked the actor if the blowback he’s received from appearing in “Roe v. Wade” might dissuade him from other right-leaning projects.

“No. It empowers me,” Kennedy said. “This is an adult topic about adult themes that are very uncomfortable and ugly. It should be talked about … it’s not just a piece of escapism entertainment. This is a real world issue that has real world implications. I’m lucky to be a part of it. And if I want to grow as an actor. This is how I’ll do it.”

In a separate interview, Kennedy talked about the “canceling” of famous Looney Tunes character Pepe le Pew, saying, “It's a scary time [and] at some point you've got to live, right? It's like there's no forgiveness anymore.”

Forgiveness and understanding the perspective of others isn't something that out of touch Hollywood gets.

WATTERS: Apu from the Simpsons, who famously ran the Springfield Kwik-E Mart who is voiced over by actor Hank Azaria for 30 years until Azaria quit after a documentary blasted the character stereotypes. And now, he is joining the Hollywood apology tour saying voicing the character contributed to structural racism.

HANK AZARIA: I apologize for my part in creating that, in participating in that. You know, part of me feels like I need to go around to every single Indian person in this country and personally apologize.

WATTERS: So, he is sorry for portraying a cartoon Indian on a show written by liberals. Joining me now to react, actor, Jamie Kennedy, who has a new film out on demand called "Last Call." All right, so you know, Matt Groening, the creator of The Simpsons. He's a liberal guy. I mean, they skewered conservatives for four decades and they're hilarious. But, you know, the show has what -- an Irish crazy custodian, a sleazy political guy, a rich and an evil corporate overlord in Mr. Burns? Is Hollywood not allowed to portray anyone who's different anymore? 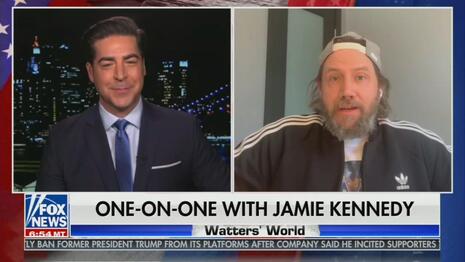 JAMIE KENNEDY: Jesse, I had this conversation last night, a friend of mine said that acting may be dead. Now, it is -- I think we should -- definitely, we have to grow and we have to have much more inclusion within our business, obviously and all stories need to be told. But Hank Azaria is an amazing actor. He is incredible, 30 years. I mean, I guess, you know, I don't know why he quit. But he had to quit because maybe he feels it is insensitive. But it's just a cartoon character. But I don't know. I mean, a lot -- this is happening a lot.

WATTERS: It's happening everywhere and if they get rid of acting, then you're screwed because that's what you do for a living. So hopefully, that doesn't happen.

BILL MAHER: Academy nominations used to say, "Look what great movies we make." Now they say, "Look what good people we are." It's not about entertainment. It's about suffering. Specifically yours.

In all honesty, I've got to ask, if your movie is so woke, how come I'm falling asleep?

WATTERS: I mean, it's true. Because, you know, you and I grew up in an era where they used to have, you know, great films and blockbusters and people go to the movies and come together and feel good about what they saw. Now, I haven't heard of anything that's been nominated. And each screenplay looks like it's written by a guy who needs to get a Prozac prescription or something. What's behind this in your opinion?

KENNEDY: I mean, I'm thinking -- there is something going on where like -- like you said, like, I think Hollywood is operating within its own echo chamber. Look, I love it. I've been lucky to be a part of it for 30 years, but it's being more and more -- how can I say -- I feel like it's almost making content for itself because when I go out in the middle of America, all around, people are like, I didn't see that movie either. So I am starting not to know all the movies that are in, and I've got the screeners so, the circle is closing.

WATTERS: It is. They are making movies for themselves. I think that's completely accurate. And your movie, "Last Call." I don't think that's anything like some of these things they're putting out. It is a feel good movie and it's about a guy that turns things around in his local community in Upper Darby, Pennsylvania, kind of near my neck of the woods where I grew up, so go on demand. See "Last Call," Jamie Kennedy. It's going to be a good one. All right?

KENNEDY: Yes, dude. It's about a local bar in Philly, you know Philly, you go have a cheese steak or a hoagie. You have a Coke, you go home.

WATTERS: That's what it is. All right, Jamie Kennedy, thanks so much for coming on Watters World.