UPDATE: The NBA is now telling the Mavericks they will be playing the anthem. See update at end of blog for more.

In what should be considered a controversial decision if we had an honest media, the NBA's Dallas Mavericks has stopped playing the Star Spangled Banner this season. Yet when the story became public, ABC and NBC yawned and offered no coverage on Monday or Tuesday. CBS This Morning on Wednesday for a scant 36 seconds.

Co-host and liberal donor Gayle King quickly explained, “If you watch the Dallas Mavericks home game this season you will not hear The Star-Spangled Banner. Team owner Mark Cuban has decided the anthem will not be played before the Mavericks home game.” Tony Dokoupil marveled, “Super interesting.”

“Sending quite a message though,” Gayle King enthused. What was the message? King didn’t say. Despite a combined four hours of air time, NBC’s Today and ABC’s Good Morning America ignored the story on Wednesday. NBC relegated it to their website and explained that the news went public on Monday:

The anthem has not been played at any of the 13 preseason and regular season games played so far at American Airlines Center, Mavericks communications manager Renee Felton told NBC News on Wednesday.

The Athletic was the first to notice the change during Monday's game, the first played with some fans in attendance.

UPDATE: The NBA has told the Mavericks to play the national anthem. See a tweet below and NewsBusters for more. 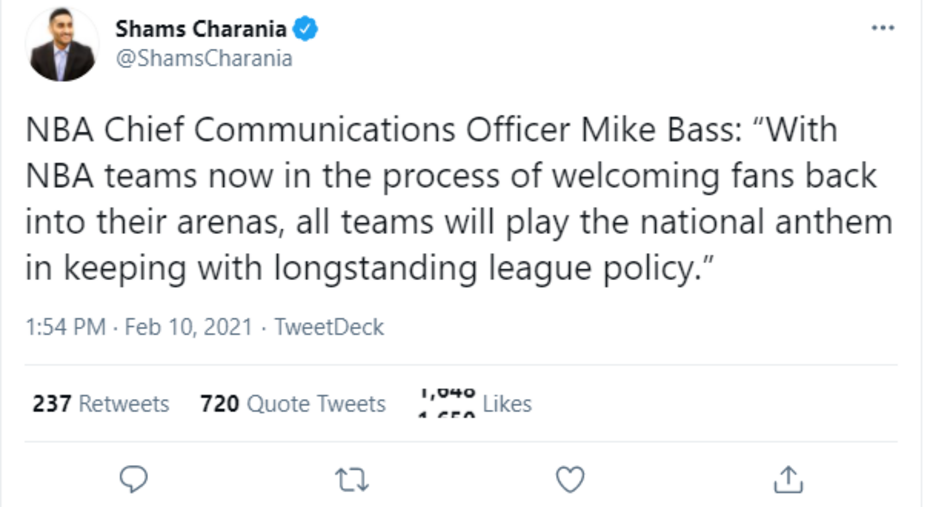 The minimizing of controversy is sponsored by Value City Furniture. Click on the link to let them know what you think. 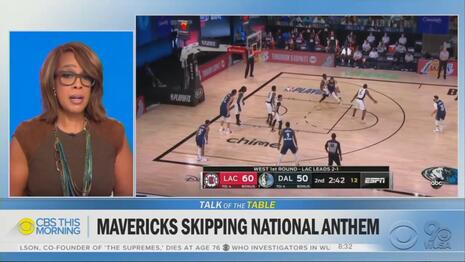 GAYLE KING: If you watch the Dallas Mavericks home game this season you will not hear The Star-Spangled Banner. Team owner Mark Cuban has decided the anthem will not be played before the Mavericks home game. The NBA says teams are permitted to run their pre-game operations as they see fit. Cuban has supported those who want to kneel during the national anthem to highlight racial injustice. Dallas is believed to be the only NBA team that has abandoned the anthem at the home games. Mark Cuban made the decision in November and has no further comment at this time. I hope that changes because we'd love to talk about that.

KING:  Sending quite a message though.