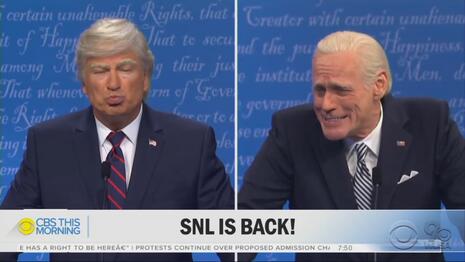 Saturday Night Live’s nasty, woke season premiere hit a new low, rooting for COVID as the President is in the hospital recovering. Yet somehow CBS This Morning on Monday touted the hate as “respectful.”

CBS co-host Gayle King opened the show cheering Chris Rock as “knockout” and far-left comedian Jim Carrey as bringing “swagger” to his Joe Biden performance. The host did not play the clip of Rock snarling, “President Trump is in the hospital from COVID and I just wanna say my heart goes out to COVID.”

The SNL sketch with Carrey and Alec Baldwin as Trump featured Carrey wishing that “karma” and “science” would collide with Trump. Somehow, King found this all respectful: “I was wondering, Vlad, how they would pull it off, considering the President is in the hospital at this time. But they were able to do it and do it in a respectful way. But also make the case they wanted to make, that some of the stuff is not okay.”

Some things are "not okay?" Would that include seeming to root for a deadly virus against the President?

Regarding Megan Thee Stallion’s performance, King hailed the hateful attack on Kentucky Attorney General Daniel Cameron for his handling of the Breonna Taylor case. During her performance, Stallion played this audio of an activist yelling: “Daniel Cameron is no different than the sellout Negroes that sold our people into slavery.”

King could only marvel: “She went all the way there.” Over on MSNBC, Sunday, AM Joy guest host Maria Teresa Kumar’s only complaint is that she wanted more vitriol: “I have to say that Alec always does a fantastic job, but last night he didn't bring the full Trump because he wasn't angry enough.”

CBS’s covering for the SNL hate was sponsored by Lincoln and Xfinity. Click on the links to let them know what you think.

A transcript of the CBS This Morning segment is below. Click “expand” to read more.

GAYLE KING: Welcome back to "CBS this morning." It was great to have SNL back. Chris Rock was knock out as a host. Jim Carey played Joe Biden with a lot of swagger.

TONY DOKOUPIL: He sure did.

KING: He really captured that debate. 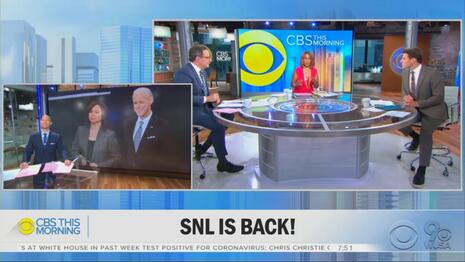 “DONALD TRUMP”:  Can I respond to that, Chris?

“BIDEN”: Will you just shut up?

DUTHIERS: So you had Maya Rudolph playing vice presidential contender Kamala Harris as the mom. Scame out breaking up the fight between Jim Carrey’s Joe Biden and Alec Baldwin’s President Trump. SNL alum Chris Rock hosted the premiere, addressing the show’s COVID-19 protocols, giving a shoutout to first responders in a smaller than usual audience. There was a touching moment, Kate McKinnon with a tribute to one of her most familiar characters Ruth Bader Ginsburg. And Megan thee stallion put on a powerful performance, slamming Kentucky's attorney general for his actions in the Breonna Taylor case.

KING: She went all the way there. So did Saturday Night Live actually. I was wondering, Vlad, how they would pull it off, considering the President is in the hospital at this time. But they were able to do it and do it in a respectful way. But also make the case they wanted to make, that some of the stuff is not okay