In May, Hypocrite John Oliver PROMISED to Return to Tara Reade. He LIED

It’s been eight weeks since HBO host John Oliver allowed a pathetic 26 seconds to the Tara Reade sexual assault allegations against Joe Biden. On the May 3 show, the HBO host promised her story would be “fully investigated” and “I am sure that we will talk more about this as the story unfolds.”

He hasn’t returned to it. In the seven shows that have aired since, ZERO seconds were devoted to Reade and her claim of forcible penetration by the then-Democratic senator. The story broke on March 25 and, after ignoring it for six editions of his program, Oliver finally broke down and covered it:

Look, it's been another grim week with news of the global pandemic broken up only by further developments surrounding Tara Reade, the former Senate aide who's accused Joe Biden of sexual assault. Now, he's denied the claim, but there are clearly big questions still to be answered here. And Tara Reade obviously deserves to be heard, the way that anyone does when they make the difficult choice to come forward with allegations of this kind, which should, of course, be fully investigated. And I am sure that we will talk more about this as the story unfolds.

In the eight weeks since May 3, seven shows aired. Oliver covered a variety of topics, including several on the coronavirus, policing reform and racism. Yet, Reade never came up again. In fact, Biden mostly wasn’t mentioned at all. On June 14, the host attacked the 2020 Democrat for not being bold enough in policing reform. 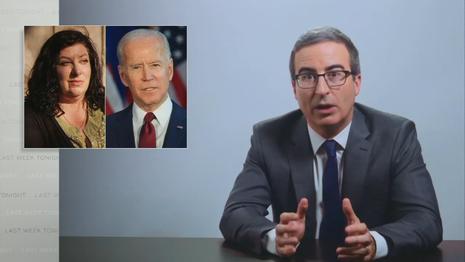 How does this contrast to the accusations against the conservative Brett Kavanaugh? On the September 30, 2018 show, Oliver unloaded on the “unhinged,” “entitled monster.” At one point, he featured a puppet calling for the then-Supreme Court nominee’s defeat in the Senate:

If you want to let John Oliver know how you feel about his lie (“I am sure that we will talk more about this as the story unfolds”) and his hypocrisy, contact him on Twitter at @iamjohnoliver. Contact him on Facebook here.

Oliver said he would investigate and cover Tara Reade and he should be held accountable for that promise.