CBS This Morning co-host Norah O’Donnell on Friday pestered veteran journalist Bob Schieffer about Donald Trump’s “mental fitness” and encouraged the veteran reporter to tout the gossipy book by Michael Wolff. Asked about the error-filled tome, Scheiffer praised, “I think he really nailed the chaos in the White House. And I think he was right on.”

Regarding Trump’s vulgar and offensive “shithole” remark, the panel discussed whether this made the President racist:

NORAH O’DONNELL: Is it racist?

BOB SCHIEFFER: Yeah. Yeah. I mean, how can you take it any other way? And when I say that, I don't say that lightly. But I mean, how else could one read this? 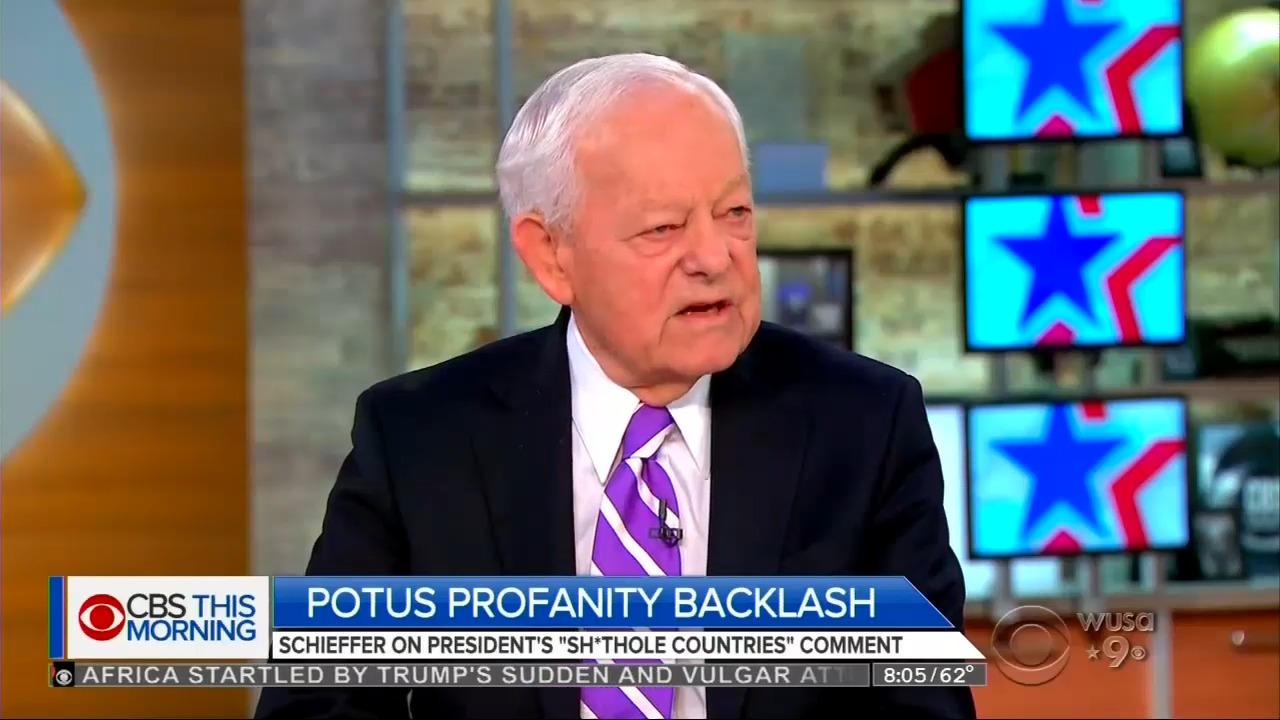 JOHN DICKERSON: Bob, let’s start with these comments about immigration. Take it away.

BOB SCHIEFFER: Well, they did not remind me of George Washington or any of his other predecessors. I can't imagine —  I mean, look, we all know these words. Anybody that's been a control room at a television studio when something goes wrong, you learn a lot of new words. And so to say this —  But to say this in the White House during a discussion, this is a new low. And I think he ought to be ashamed of himself. Do I understand he's now saying he didn't say it as a renewed tweet this morning? 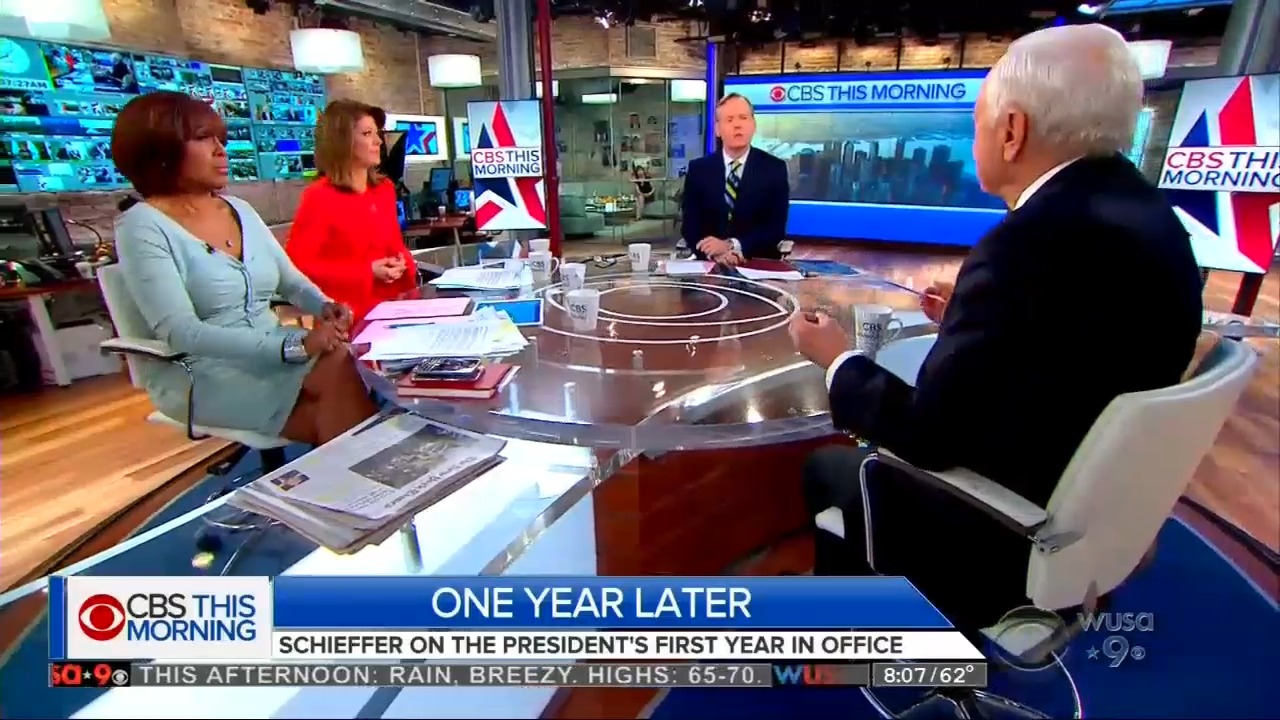 DICKERSON: That's what he is saying. Of course, there were multiple people in the room. And the White House didn't deny it. They tried to turn it into some kind of a view about his toughness on immigration. But they didn't deny he said it.

NORAH O’DONNELL: But Bob, what about the fact that he called them expletive hole countries when he was referring to countries that have a predominantly black population?

GAYLE KING: Ands aid why couldn't we get people here from Norway, which is 99 percent white.

BOB SCHIEFFER: And all who report they're happy in Norway. There was a story the other day on how happy they are in Norway. This is —

O’DONNELL: Is it racist?

SCHIEFFER: Yeah. Yeah. I mean, how can you take it any other way? And when I say that, I don't say that lightly. But I mean, how else could one read this?

KING: And you know what, Bob? This should not be a bipartisan issue [sic]. The fact that it was so hurtful and so unkind and so demeaning to so many people, are you surprised that more Republicans aren't really speaking up and just condemning those words?

SCHIEFFER: I am in some ways. But, I mean, you know, that's their business. I have my opinions and they have theirs, but I don't see how this helps them or anyone else. And I don't know where this goes. I mean, this was the most unusual campaign we've ever experienced. Certainly in my lifetime. This year with the coming of the Wolff book, the chaos rolls on.

KING: Did you learn anything in that book that you didn't know? What are your thoughts about that book?

SCHIEFFER: You know, I think he really nailed the chaos in the White House. And I think he was right on. Now, you know, you can question some of his sources and methods and all of that. But people always have asked me over the years, “What's your favorite beat? The White House, I guess?” And I say, “Yeah, that was fun.” But, you know, everybody in the White House, they all worker for the same guy. It's on Capitol Hill where you really find news because there are all these factions and all these different independent contractors and that's what's fun for a reporter. But that's really not apt any more. As the Wolff book underlined, there is many factions in the White House now as there are up on Capitol Hill and we've never had anything like that before. And I thought he really gave you a guide. I mean, you had the Spicer and the Priebus wing over here. Kind of speaking for establishment Republicans. You had Bannon who is this whole new force into himself over here. You have the Kushner family, they have their own spokesman. They have their own agenda. And then you have the boys, the Trump boys over here. And all of these people. There's no question about it. They're all leaking, they're all have their own agendas. We've never had anything like that.

SCHIEFFER: You know, I don't know. I'm going to —  I'm going to say I'm not a doctor and I don't know what it is. But I do say I keep wondering why does he say these things? Why does he step on his own story when you're in the middle of the tax reform and all of that? And he has the little good news and he manages to get something else, some of this stuff involved in it. I don't know why he does what he does.

DICKERSON: And his most recent comments come into context. Remember, he started his campaign saying Mexicans are rapists. So this is not the first time he’s said this. What do you think the effect will be for Republicans running in 2018 and the President?

SCHIEFFER: You know, I think the most under-reported story right now and the reason we haven't reported on it is simply because you have all of these disasters that we're going through with the climate at the same time this continuing ongoing chaos in the White House. I am beginning to think, for the first time, that there is a —  I think that the Democrats may actually take the House this time. You've had 29 Republicans now that have decided they're not going to run. They only need 24 seats, the Democrats, to take the House. I'm not saying it's going to happen, but I think it's now possible. I wouldn't say it's probable, but I think it's possible and I think that's the big story. We haven't had time to talk about it.

DICKERSON: And we’re out of time now. Bob, we’ll have you back to talk about it.