Reacting to the air strikes ordered by President Trump, Good Morning America journalist Martha Raddatz on Friday assailed the “horrific chemical attack” by Syria’s dictator. Given that the war criminal Bashar al-Assad brutally massacred over 70 of his own people, the journalists at ABC might be embarrassed at how, through the years, they fawned over the “charming,” “intelligent,” “thoughtful” tyrant.

On July 7, 2008, Barbara Walters gushed to her View co-hosts about interviewing the dictator: “From my experience, he was very intelligent, well-informed, thoughtful.... [He] wants very much to have relations with the United States.” Walters assured, “People say, ‘Oh, you're brainwashed.’ But that was not it!”

You’re not brainwashed, Barbara?  Walters praised the Syrian state, cheering, “They have total freedom of religion.”

On February 5, 2007, Diane Sawyer interviewed the dictator. What was she interested in? The thug’s tastes in music and movies. The then-GMA host wondered, “You like video games?... Do you have an iPod?”

As though she was talking to a celebrity on Access Hollywood, Sawyer mused, “And you're a country music fan. Faith Hill? Shania Twain?”

The fan of chemical weapons and gassing his own people touted The Pursuit of Happyness as a favorite film. He related to Sawyer: "It tells you a story...Maybe there's many beneficial things to learn from, about real life."

Keep all of this in mind as ABC now stridently reports on the horrors of Assad. Diane Sawyer and Barbara Walters were the dictator’s willing dupes. 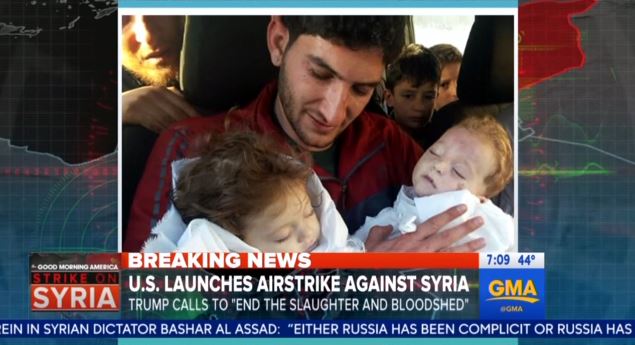 A partial transcript of Walters's 2008 comments can be found below:

"From my experience, he was very intelligent, well-informed, thoughtful. We spoke perfect English, wants very much to have relations with the United States, has some solutions for ending the war in Iraq. She was educated in England, worked in this country, speaks English the way I’m talking to you. Lovely, intelligent. I don’t want to — People say, “Oh, you’re brainwashed.” But that was not it. They’re just very — not in a day. Very charming, intelligent."