The network morning shows on Friday pounced on the announcement that Michael Flynn is Donald Trump’s choice for National Security Adviser, immediately branding the Army Lieutenant General  “divisive,” “controversial,” fiery” and known for his “infamous” appearance at the 2016 Republican National Convention. In contrast, ABC and NBC saw Barack Obama’s National Security Adviser Susan Rice as “hard-nosed,” “no-nonsense” and a  “victim” of the conservative media.

On NBC’s Today, Steve Kornacki warned of the Flynn choice: “To call this divisive might be understating the case. If you even talk to Republicans on Capitol Hill, this is a selection they are very uncomfortable with.” Co-host Savannah Guthrie admonished, “It is a key pick and it is not without controversy.”

“Controversial” became the watch word as Kristen Welker underlined, “And like his soon-to-be boss is known for controversy and bucking tradition.” A few seconds later, she repeated, “Lieutenant General Flynn is not without controversy.” 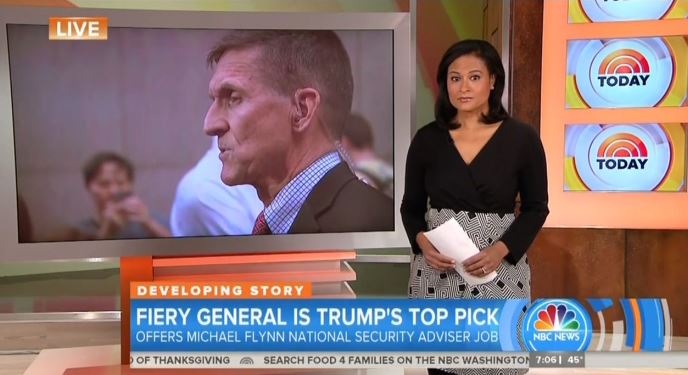 On ABC’s Good Morning America, Martha Raddatz used similar language and also blasted the military figure for appearing at the Republican convention: “A controversial figure, Flynn roused support at the Republican national convention with the infamous 'lock her up' chant against Hillary Clinton.” 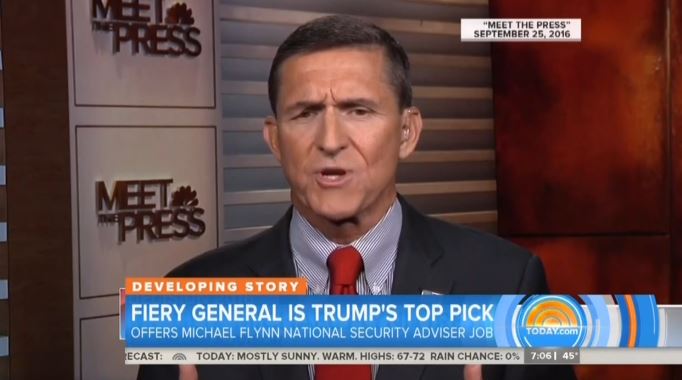 In contrast, GMA’s Jon Karl on June 5, 2013 praised Rice’s appointment as Obama’s National Security Adviser, hailing, “She is tough. She is no nonsense.” This is despite the fact that she appeared on the Sunday talk shows and supplied false information on the Benghazi attacks days after they occurred.

With regard to Trump’s other pick, Senator Jeff Sessions as Attorney General, Today’s Kornacki lectured:

STEVE KORNACKI: He is a lightning rod because of past statements, racial statements and he actually went before the Senate 30 years ago for confirmation [as a judge] and they rejected him. So that controversy would come right back if he got nominated. 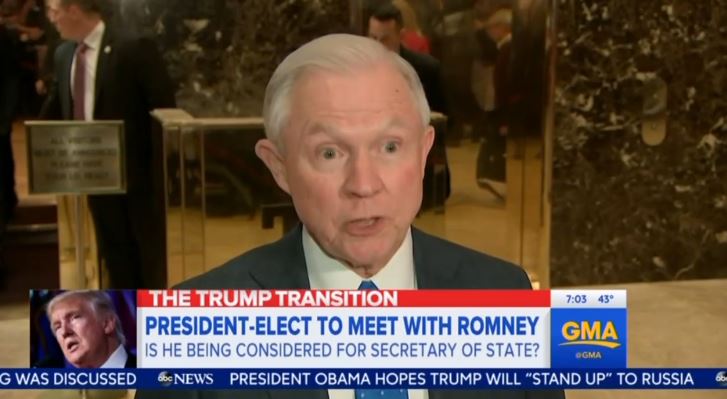 MARTHA RADDATZ: But critics immediately pointing to Sessions' past allegations of racist behavior. One lawyer he worked with said the Senator called him boy and told him to be careful what you say to white folks. Sessions denied the allegation

GEORGE STEPHANOPOULOS: Another friend of his, Senator Jeff Sessions. We talked about those allegations of racism that cost him a federal judgeship 20 years ago. He’s served in the Senate 20 years since then. How serious will those charges be in his confirmation if he is indeed chosen for a job like attorney general or Pentagon secretary?

In contrast, when Barack Obama nominated the controversial Eric Holder to be Attorney General, none of the networks noted applied ideological labels or pointed out his role in President Bill Clinton’s pardon of fugitive Marc Rich.

A partial transcript from NBC's Today is below:

SAVANNAH GUTHRIE: President-elect Trump has now asked retired Army Lieutenant General Michael Flynn to be his National Security Adviser. It is a key pick and it is not without controversy. NBC’s White House correspondent Kristen Welker with more on that. Hi, Kristen. Good morning.

KRISTEN WELKER: A three star general, 57-year-old Lieutenant General Michael Flynn has been a loyal supporter and top advisor to President-elect Donald Trump throughout his campaign. And like his soon to be boss is known for controversy and bucking tradition.

WELKER: Lieutenant General Flynn is not without controversy. He recently raised eyebrows to those in the military community who usually stay out of politics, sounding, at times, like a candidate himself.

KORNACKI: There is no Senate confirmation needed. If you want this pick, you can make this pick. And obviously from what Kristen Welker just said in that report, to call this divisive might be understating the case. If you even talk to Republicans on Capitol Hill, this is a selection they are very uncomfortable with.