The journalists at CBS This Morning on Thursday worried that hordes of Americans would ruin the paradise of Cuba now that commercial flights are going to the country. Never once mentioning the word “communism,” reporter Kris Van Cleave hyped the city of Santa Clara: “Famed revolutionary Che Guevara is buried in this monument, one that will soon be visited by many more Americans.”

In reality, Guevara was a murderer and international terrorist. The journalist noted that “as the number of scheduled flights expands,” Americans will be “testing the limited tourist infrastructure here.”

Later, Van Cleave featured one such visitor worried about Americans spoiling the beauty of Cuba:

KRIS VAN CLEAVE: Taimarie Locke  wanted to be on the first flight so she could see Cuba as it is now, before the rest of America arrives.

TAIMARIE LOCKE: We really wanted to get there while it was still raw. 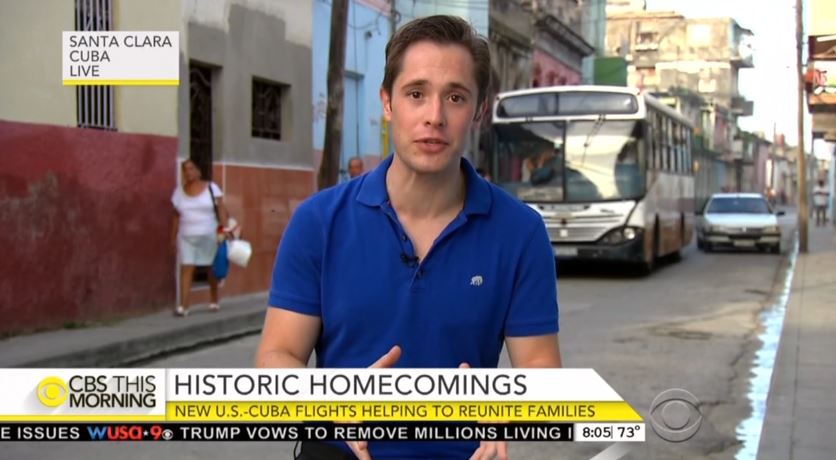 The online version of the article is even more insulting. The headline warns, "Brace yourself, Cuba, the Americans are coming."

CBS isn’t the only network to be excited over the communist country. On July 21, 2015, as ABC thrilled over the “historic” opening of a Cuban embassy in Washington D.C., the same network skipped coverage of the country’s human rights violations. 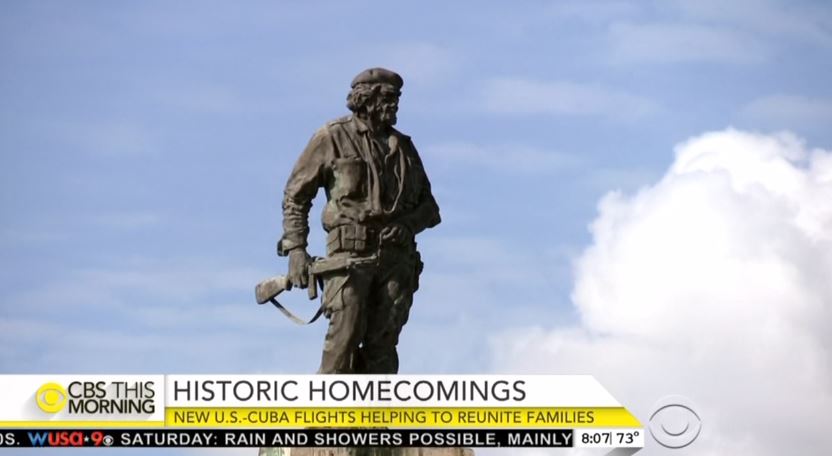 Indeed, ABC has a long history of spinning for Cuba. On October 11, 2002, Barbara Walters famously gushed:

BARBARA WALTERS: For Castro, freedom starts with education. And if literacy alone were the yardstick, Cuba would rank as one of the freest nations on Earth. The literacy rate is 96 percent."

DEMARCO MORGAN: Many more U.S. passenger jets will soon start flying to Cuba after yesterday's historic commercial flight to the island. The Department of Transportation gave approval, Wednesday, for eight airlines to flight to Havana and up to 20 daily flights may soon go to Cuba's capital. For now, airlines are going to smaller cities like Santa Clara. That’s where the first flight to Cuba in more than 50 years touched down yesterday. Kris Van Cleave was the lucky guy and was on board and in Santa Clara. Kris, good morning.

KRIS VAN CLEAVE: Good morning. Silver Airways is expected to begin its service to Santa Clara today. That’s the second commercial, scheduled airlines to serve American Airlines will roll out its service here and to several other several cities in Cuba starting next week. What that means is a lot more Americans are going to be coming to this town which, for many of us back home, isn't a place we really know anything about. Ten-month-old Olivia Gonzalez probably doesn't realize the significance of what is happening around her. But as JeBlue flight 387 from Fort Lauderdale arrived to a warm welcome in Santa Clara, a new chapter in U.S./Cuban relations began and Olivia's family is about to make some history of her own.

VAN CLEAVE: Later today, Mario and Nimaris are getting married and their two daughters will be baptized in their families long time church. The kids will then meet their ailing great grandmother for the first time. What does it mean to be able to be there for her grandmother?

GONZALEZ: For her to say that she would like to meet Olivia and Daniella meant everything to me. I was like, ‘I really want to make this happen.’

VAN CLEAVE: It was an emotional moment when Yara Erosa  arrived, the place her mother grew up, but  fled in the 1960s. This is the moment she finally met her uncle. What is this moment like?

YARA EROSA: It’s like that first time a child sees Santa Claus and gets a Christmas tree full of gifts.

VAN CLEAVE: Santa Clara is Cuba's fifth largest city with nearly 250,000 people. It's a bit of a crossroads in the center of the island. Famed revolutionary Che Guevara is buried in this monument, one that will soon be visited by many more Americans as the number of scheduled flights expands, testing the limited tourist infrastructure here. Transportation Secretary Anthony Foxs, who took the flight, expects that to change.

ANTHONY FOXX: Getting the infrastructure in a position to embrace this kind of activity is going to require a lot of effort on the part of Cubans.

VAN CLEAVE: Taimarie Locke  wanted to be on the first flight so she could see Cuba as it is now, before the rest of America arrives.

TAIMARIE LOCKE: We really wanted to get there while it was still raw.

VAN CLEAVE: And when we talk about things like tourist infrastructure, we mean things like there aren't a lot of hotels here at Santa Clara. There’s not a lot of mass transit and take the runway at the airport. There is about 500 feet of that runway that we were told is out of service. Our pilots yesterday said there was a truck parked to mark where that area ended . They had to fly over the truck and then land. Josh?

ELLIOTT: You’re a braver man than any of us, Kris Van Cleave.