A new MSNBC ad touts the hosts of Morning Joe as tough “firebrands” and “disrupters” who stand up to people like Donald Trump. Yet, it was Joe Scarborough and Mika Brzezinski who repeatedly fawned over Trump during the primaries and only turned on him once it became obvious he would be the nominee.

With stark, black and white photos, the commercial’s announcer proclaimed, “They are the bold. They are the fearless. They are the firebrands, the disrupters who speak the truth and hold the powerful accountable.” The pictures featured Scarborough and Brzezinski talking to candidates, including Trump.

The ad concluded, “They tell us what’s going to happen in Washington before Washington even knows. That’s why we need them to start the day.”

The problem with this narrative is that Scarborough and Brzezinski repeatedly gushed over Trump. On January 29, they compared Trump’s plane landing to that of the Pope’s in the Middle East:

JOE SCARBOROUGH: …We turned on the TV and I'm glad I did. It was Trump's plane landing in Des Moines. And I swear to God –

MIKA BRZEZINSKI: It was unbelievable.

SCARBOROUGH: It was like the Pope had landed with the—

SCARBOROUGH: -- with the Middle East peace pact to end 3,000 years of war. It was-- I’m just following up what Cokie said. The grand spectacle of it all was every bit as remarkable as the story Heilemann told in Iowa –

BRZEZINSKI: And he planned it.

Leaked audio from a Morning Joe town hall in February featured Brzezinski gushing to Trump and his “wow moment.” Scarborough bragged to Trump, “We played it several times this morning.”

Scarborough slammed Romney for daring to oppose the businessman.

Fast forward to June and the MSNBC host was comparing Trump to “Nazi Germany.” Now that Trump is deeply unpopular, Scarborough is routinely tough on the nominee. Hardly the tone of a brave “firebrand.”

A transcript of the ad is below: 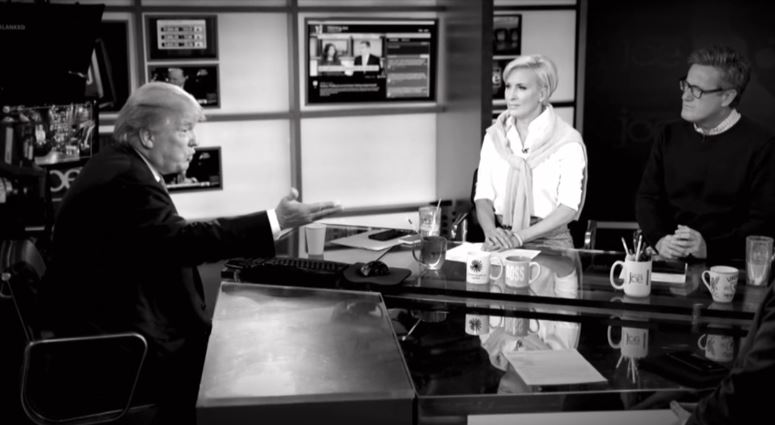 ANNOUNCER: They are the bold. They are the fearless. They are the firebrands, the disrupters who speak the truth and hold the powerful accountable. They tell us what’s going to happen in Washington before Washington even knows. That’s why we need them to start the day.