Journalist and author Mark Halperin on Monday mocked the “unscientific” claims of liberal media bias from conservatives. With All Due Respect guest Donny Deutsch derided the 2016 campaign assertions as “conspiracy theories." After playing a montage of conservatives on Fox hammering journalists for coverage of Donald Trump, Deutsch seethed, “It's preaching to their audience which, A, loves conspiracy theories. I mean, they're talking to their audience.”

Bloomberg editor Halperin played a montage of complaints of liberal bias and derided, “But I think it is so diluted. It is so unscientific and so un-rigorous, so off the point of [Trump] needing a comeback.” He included an example of Fox and Friends hosts discussing a study by the Media Research Center’s Rich Noyes.

In the clip, Fox host Steve Doocy suggested people “look at the media bias and you look at the Republican vs. Democratic conventions."

Far from being “un-rigorous,” the MRC study found: 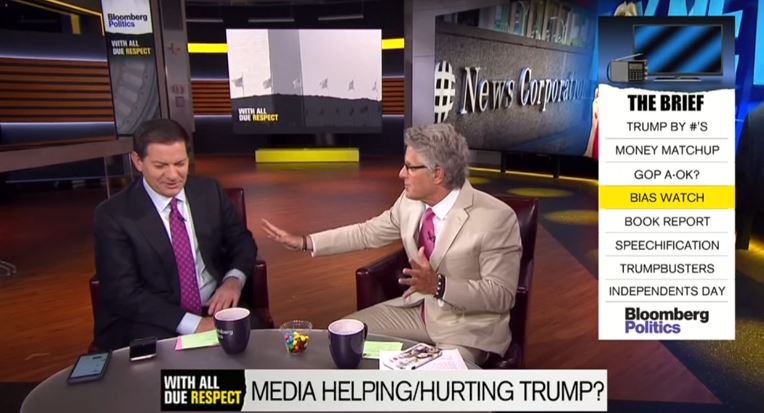 During the first two days of the Democratic convention, various speakers called Donald Trump a con man, a fraud, a bigot, and a racist; someone who “cheats students, cheats investors, cheats workers,” who “rejects science” and would take America “back to the dark days when women died in back alleys.” Trump’s policies and rhetoric was described as “cruel,” “frightening,” “deceitful,” “deeply disturbing” and “ugly.” He was someone who promoted “racial hatred,” who had “hate in their heart,” and was “making America hate again.”

Deutsch helpfully explained the disparity this way: “Maybe there were more negative mentions at the Republican convention because it was horrible and depressing. It was a lynch mob.”

Halperin chided, “The Fox and talk radio news loop, it's death to them.”

How could conservatives the find 2016 coverage to be slanted? 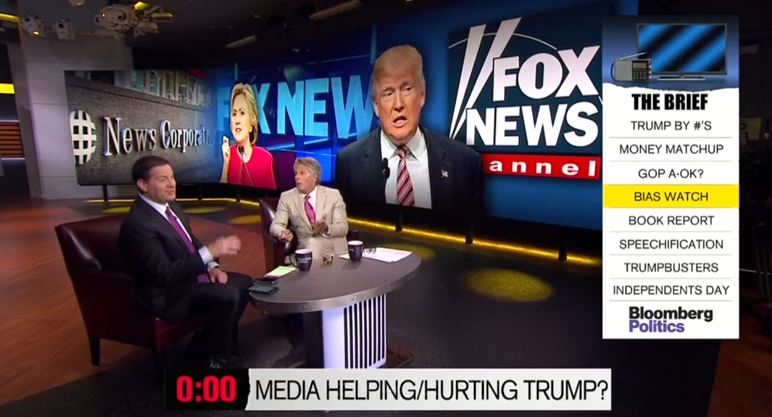 [Montage of Fox hosts talking about media bias against Trump.]

MARK HALPERIN: So, Donny, they're talking more about polls and media bias as and crowd size than they are about Trump's message, very similar to what we heard at the end of the 2012 campaign for Mitt Romney and his supporters. Is this kind of stuff preaching to the faithful, largely, in these audience is it helpful or hurtful to Trump’s campaign?

HALPERIN: Who’s statistic is that?

DEUTSCH: There was People for the —

DEUTSCH: Tomorrow's show, I'm going to bring you that document. Maybe there were more negative mentions at the Republican convention because it was horrible and depressing, it was a lynch mob.

HALPERIN: But is this general attitude a good idea.

DEUTSCH: No, because you basically paint him as a loser already. You're basically saying you're already giving excuses.

DEUTSCH: You’re already teeing it up that he is losing. It's good TV for their audience. It’s bad politics.

HALPERIN: They're wasting time not talking about his message, preaching to the converted. Yes, it revs up the base a little bit. But I think it is so diluted. It is so unscientific and so un-rigorous, so off the point of needing a comeback. Trump needs a comeback. I mean, he needs a comeback. If he is going to win, he needs to come back. And they're out there saying the polls are wrong because his crowds are bigger?

DEUTSCH: Which is all he used throughout the entire debates.

HALPERIN: By the way, Fox's own poll which they barely mentioned since the day it came out, as I’ve seen. has him 10 behind.

DEUTSCH: Another question. A poll which is representative of hundreds of millions of Americans versus, oh if 10,000 people are coming out, the polls must be wrong, that is ignorance. One has nothing to do with the other.

HALPERIN: Romney was sure he was going to win. And the Fox and talk radio news loop, it’s death to them. It is like — It is like a parallel universe where Trump is going to win and then the real universe happens.