Ted Cruz continued his verbal war on the liberal media Monday, sparring with NBC's Hallie Jackson over the mainstream media’s excitement to crown Donald Trump the Republican nominee. Cruz, standing next to Indiana Governor Mike Pence, endured a barrage of questions about the businessman. The Texas Senator finally shot back: “I guarantee you if we were here and a Democratic governor actually endorsed Hillary Clinton, the first question would be, ‘Governor, tell me how Hillary Clinton is fantastic.’”

Cruz explained that a successful, conservative governor “is barnstorming the state, campaigning with me. And yet the first question you ask him is, ‘So, tell me about Donald Trump.’”

Earlier in the interview, the Senator referenced his appearance on Meet the Press, Sunday: 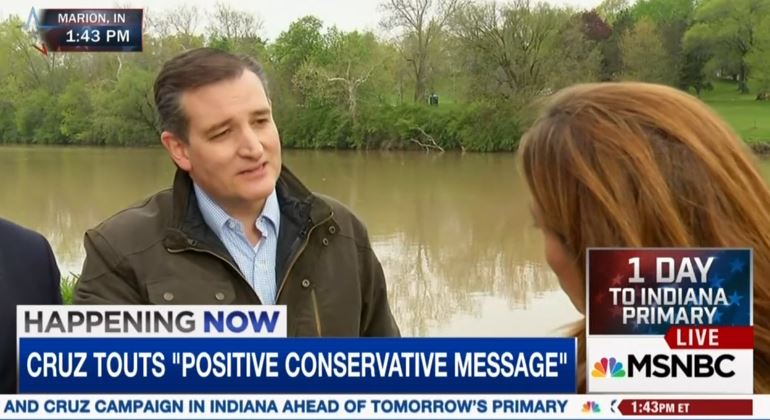 TED CRUZ:  I was on your network with Chuck Todd who I think nine times try to get me to say that I would support Donald Trump. He seems really frantic to get me to say that. And I think one question that the voters are asking at home is why mainstream media are so desperate to get conservatives to abandon our principles and support Donald Trump. And I think the reason is simple.

Cruz reasoned, “Virtually all of the network execs are partisan, liberal Democrats and if Donald Trump is the nominee from a partisan Democrat’s perspective, it’s a win win.” 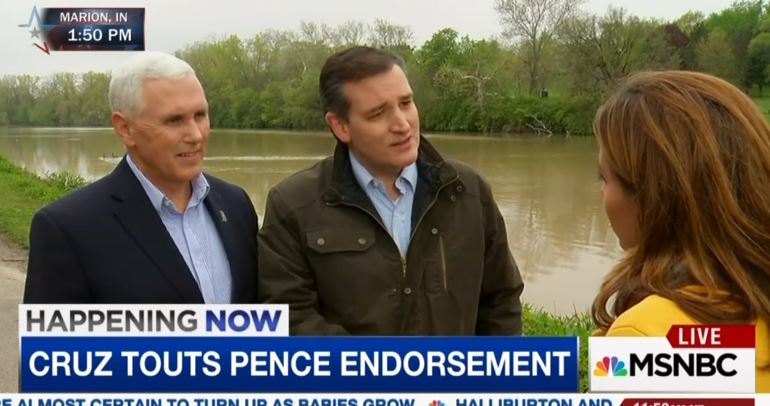 HALLIE JACKSON: If it doesn’t go your way, do you stay in this race?

JACKSON: You’ve talked about a viable path, Senator, but I want to be really clear about what that means. If Donald Trump gets close, 1235 or 1236, what does that mean, really? What does going to the distance mean?

TED CRUZ: Hallie, with all respect, I think the process story drives people crazy. You know what people in this state care about? They care about their paychecks and it is stuck in the mud because Obama administration is hammering small businesses.

JACKSON: You know I have been with you for a long time, Senator, following your campaign. For months I heard you make the argument and your campaign made the argument that in a head to head match up, you are the one to beat Donald Trump. You argued that since January when you began distancing yourself from Donald Trump. John Kasich is effectively making Indiana ahead now a head-to-head match up.  So, if you cannot defeat Trump here, what is the argument you make?

CRUZ: The argument that I am making is the Republican Party stands for something, that we actually believe something. This is a moment where the entire country relying Indiana to save us from going over this cliff.

JACKSON: So, if it’s a cliff and they don’t, what’s the argument then, I guess. I’m just looking at where you are and if you lose, how you come back from that?

CRUZ: I do think the question that viewers at home ought to ask, yesterday, I was on your network with Chuck Todd who I think nine times try to get me to say that I would support Donald Trump. He seems really frantic to get me to say that. And I think one question that the voters are asking at home is why mainstream media are so desperate to get conservatives to abandon our principles and support Donald Trump. And I think the reason is simple.

JACKSON: I mean, I push back against that, Senator, obviously.

CRUZ: Let me make an interesting observation on this. So we're here with Governor Pence. Very popular conservative governor in Indiana. Every candidate running for president tried very hard to earn his support. He endorsed me. He's campaigning with me, barnstorming the state.

JACKSON: Is it an endorsement, by the way? There's been a question.

CRUZ: Let me finish this point, Hallie. So, very popular, very well-respected, very conservative governor of Indiana endorsed me, is barnstorming the state, campaigning with me. And yet the first question you ask him is, “So, tell me about Donald Trump.” How about, “Governor, why did you endorse Ted Cruz? You could have endorsed any of the candidates.”

JACKSON: But the governor brought —  I've got to push back respectfully. Sure, on Friday—

CRUZ: No, you brought Donald Trump up.

JACKSON: Donald Trump was the first person you mentioned when you endorsed Ted Cruz.

PENCE: And I know how the national media plays it. You know, majoring in the minor. I believe in the 11th Commandment. I like and respect all of the men that were still in the field for president.  And I would support any one of them over Hillary Clinton or Bernie Sanders. But what I announced last Friday was that I am supporting and voting for and endorsing Ted Cruz for president of the United States in the Indiana primary, because I see him as a principled conservative, who's shown the courage of his convictions.