The journalists at NBC’s Today howled with outrage at Donald Trump’s attacks on Hillary Clinton, echoing ABC’s assessment that the businessman might be sexist. Matt Lauer and Savannah Guthrie spent the first half of their interview, Thursday, demanding he explain recent remarks. Lauer lectured, “You on the other hand seem to continue to say things that alienate women voters.”

Lauer continued, “You said Hillary Clinton is still playing the woman card... and if she were a man she would only have five percent of the vote. Seventy percent of women say they have a negative view of you. Do you even care?” In a follow-up question, the co-host pressed, “But are you saying women in this country vote simply on gender?”

Not moving on, Guthrie jumped in to chide the candidate for his “demeaning comment.”

SAVANNAH GUTHRIE: But, Mr. Trump, for you to say if she were not a woman, she would be getting five percent suggests the only thing she has going for her is that she was a woman, not that she was a former senator, former secretary of state and a lawyer. Do you understand why people find that to be kind of a demeaning comment? 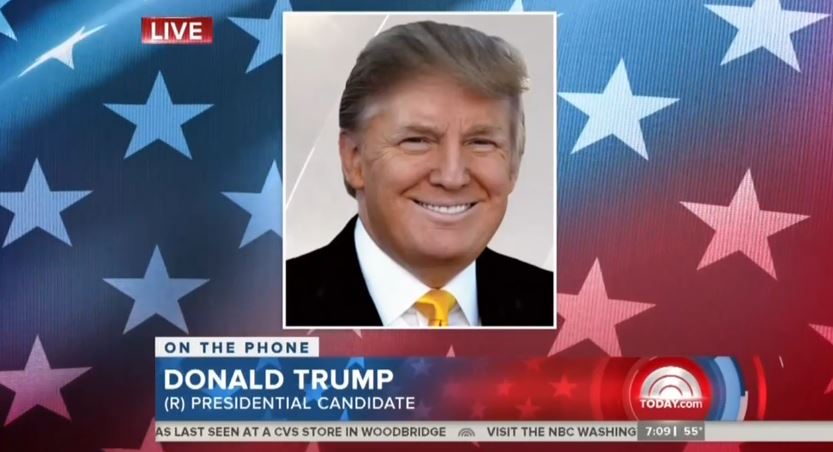 Last week, Today hosts pushed Trump to the left on issues such as transgender bathrooms, abortion and taxes. The candidate obliged, offering left-wing positions on all three.

On Wednesday, Good Morning America's George Stephanopoulos, who has a long history of working for and supporting the Clintons, told Trump that “critics” are calling you “sexist.”

A transcript of the Today segment is below: 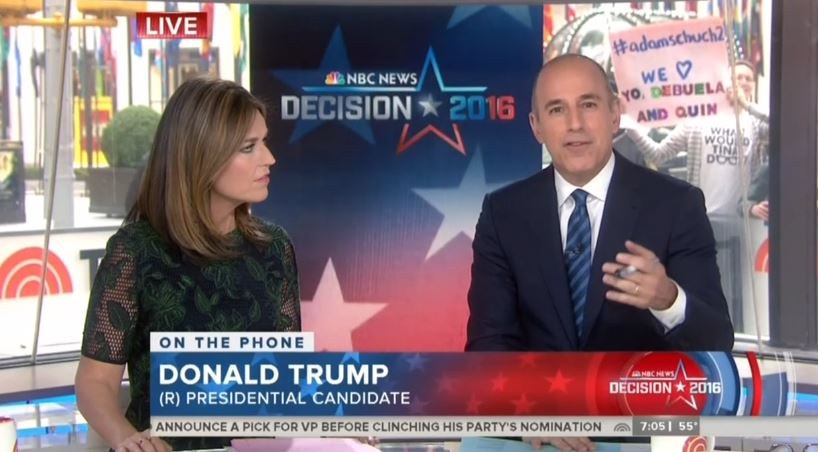 MATT LAUER: Let's talk now to Donald Trump about all of this. He is on the phone with us now. Mr. Trump, good morning to you.

LAUER: I want to talk about foreign policy in a minute. But let me start with pure politics. Ted Cruz says Carly Fiorina is his running mate if he gets the nomination. Gets headlines. It also might get him some more support with women voters. You on the other hand seem to continue to say things that alienate women voters. On Tuesday night, you said Hillary Clinton is still playing the woman card — or the women card — and if she were a man she would only have five percent of the vote. Seventy percent of women say they have a negative view of you. Do you even care? 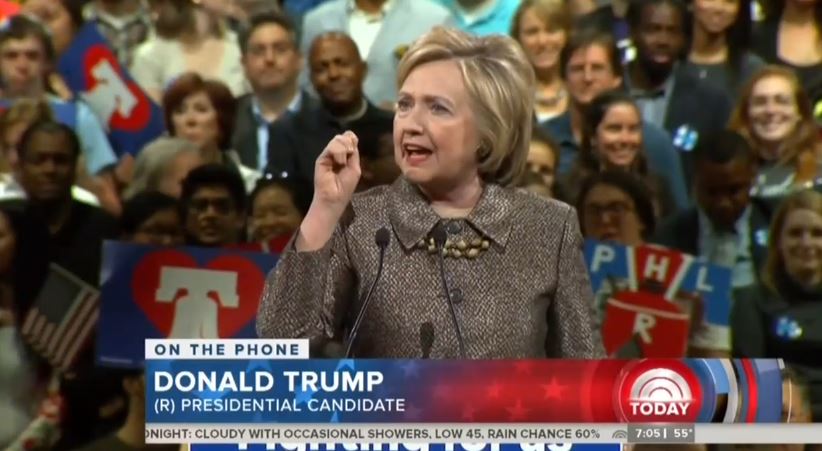 LAUER: But are you saying women in this country vote simply on gender?

TRUMP: Well, I don't think they vote on gender, no. I think they vote for security. I think they vote for jobs. And that's why I'm doing so well, that's why I'm leading the Republicans a lot. In all the elections I won on Tuesday night, which is five states. And then I won, of course, New York the week before, I'm winning them one after another now and building up tremendous numbers and tremendous numbers of delegates and millions and millions of voters. In all of those exit polls, I led with women and I led with women by tremendous margins overall other candidates.

SAVANNAH GUTHRIE: But, Mr. Trump, for you to say if she were not a woman, she would be getting five percent suggests the only thing she has going for her is that she was a woman, not that she was a former senator, former secretary of state and a lawyer. Do you understand why people find that to be kind of a demeaning comment?

TRUMP: no. I find it to be a true comment. I think the only thing she has got going is she's a woman. She has done a terrible job in so many ways. You look at Libya. You look at some of the things that she's done that are absolutely disastrous. No, I would say the primary thing she has going is that she's a woman and she's playing that card like I've not seen anybody play it before.

TRUMP: No, not at all. And I put the wall and all of that in a little bit of a different — 'll be doing a big speech on immigration very shortly. But I’m talking more about that in the form of immigration, the wall, undocumented immigrants having to be brought out of the country. We will do that. It's never been a worse situation than we have right now. You look at the crime. You look at the tremendous impact they have on our country, economically. You look at what's pouring across the border. But I consider that immigration as opposed to foreign policy. And I'm going to be doing a policy speech on immigration fairly soon.

GUTHRIE: Let's talk about ISIS. You said in your speech yesterday that they will be gone very quickly in a Trump administration. So, can you be more specific? Are you envisioning a massive ground troop presence in Syria and Iraq to get rid of ISIS? It seems that would be necessary if you want to get rid of them quickly.

TRUMP: Well, one of the tenets of my speech yesterday —  it's gotten great reviews, as you know, was unpredictability. You want to be unpredictable.

GUTHRIE: Yeah, but people are casting votes. And so, they should know whether that means a massive military presence in the Middle East.

TRUMP: But Savannah, if I get elected president, I don't want ISIS to know what I'm going to be doing.

GUTHRIE: What about the American voters?

TRUMP: I don't like the idea. And psychologically, we need to —  and as a country, we need to -- when President Obama announced we're sending 250 soldiers, when he announced previous to that, we're sending 50 soldiers and then he announces it to the world, they have a target on their back. He shouldn't be announcing that.  He shouldn't be talking about what he's doing militarily. The enemy is watching every move we say, every thing we do militarily, we announce what we're doing and they prepare for it. I don't want that. And one of the big tenets of my speech yesterday was the fact that I said —  and very, very strongly -- we need unpredictability. We need to be unpredictable. We're so totally predictable, Matt.

LAUER: Yeah, but some American voters might be a little bit nervous that this call for unpredictability is actually a way of masking an understanding of the issues or grasp of the details.

TRUMP: Well, I have a total grasp of the details, far greater than just about anybody else. That, I can tell you. When I said take the oil —  I've been saying it for a long time —  I didn't want to tell that. But yourselves and everybody else has been saying, “Tell us what it is. Tell us what it is.” After three months I said, “Take the oil.” Now I would have preferred not doing that. But politically, I really had to. It got to the point where people had to know. I would have preferred not saying take the oil. And when you go in, you surprise them. Now fortified oil reserves and they're prepared. We'll still take the oil and we should be taking the oil and we're not.

GUTHRIE: Would you rule out the use of nuclear weapons in the fight against ISIS?