The journalists at Good Morning America on Monday worried that 13 Hours, the new Benghazi movie, is a “political hot potato.” Reporter Juju Chang trumpeted that the “untold version of events in Benghazi [is] also sparking fresh controversy.”

Talking to Michael Bay, who she introduced as “known for killer Transformers,” the reporter fretted that 13 Hours has "turned into a political hot potato. Why did you want to pick that up?” Speaking of the accusation they were told to stand down, “the CIA calls the claims a distortion of events and people.” 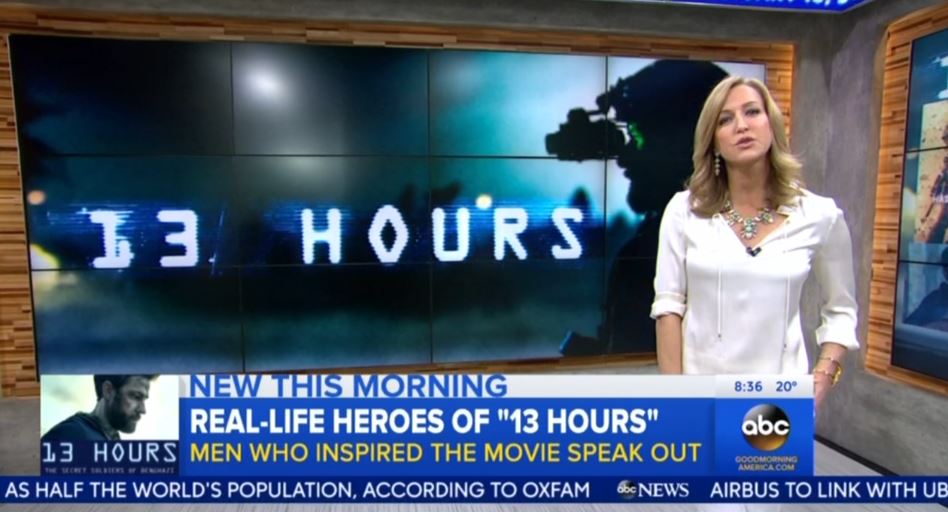 LARA SPENCER: And we turn now to 13 Hours. That’s the new film about the deadly attack on the U.S. Consulate in Benghazi, inspired by real life events. Well now, the real heros behind the story are speaking out. Nightline anchor juju Chang has their story.

JUJU CHANG: It has all the makings of an epic Hollywood tale. Unsung heroism, bravery, honor. But 13 Hours, billed as a true-life, untold version of events in Benghazi also sparking fresh controversy.

MARCO RUBIO: Someone who lies to the families of those four victims in Benghazi can never be president of the United States. 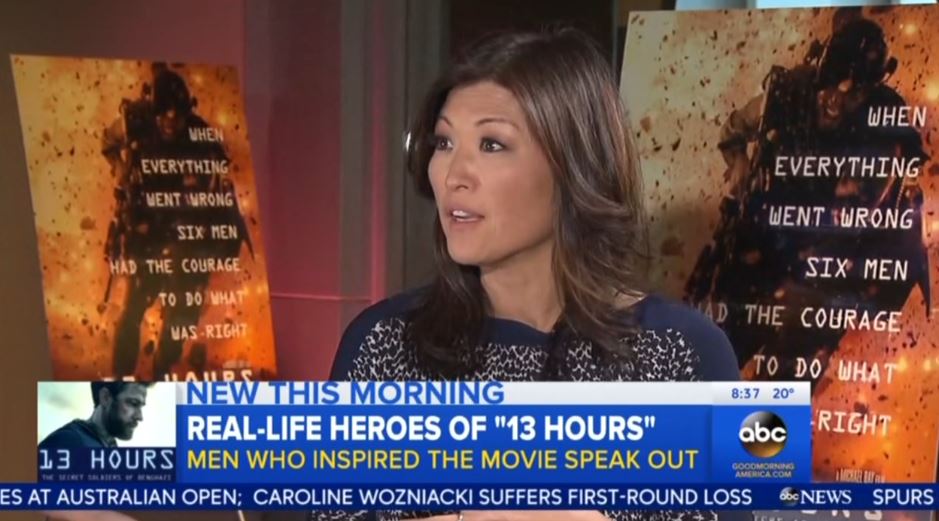 BILL CLINTON: She proved in that 11 hour Benghazi hearing she could stand her ground.

CHANG: But director Michael Bay, known for killer Transformers and explosive Armageddon, isn't surprised. It's turned into a political hot potato. Why did you want to pick that up?

MICHAEL BAY: Because there was a great human story underneath it. This was a heroic night. Really heroic. And no one knew that. 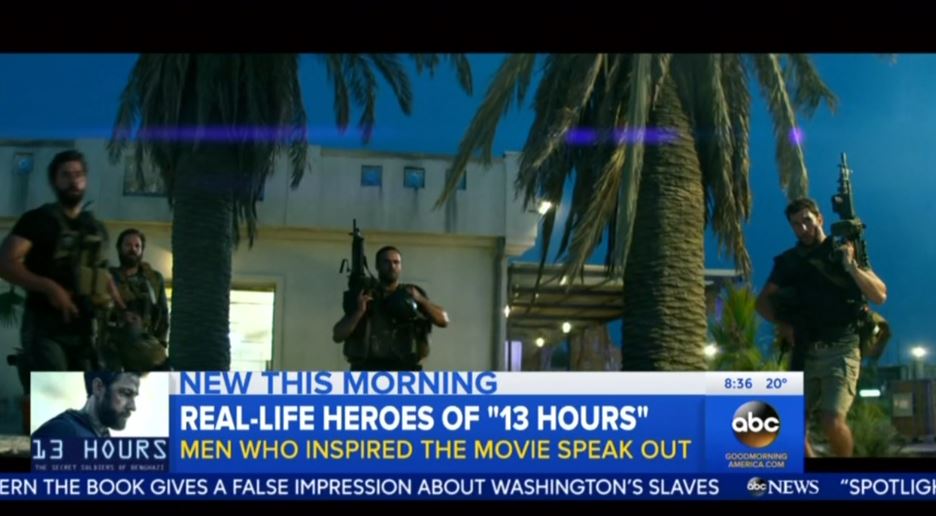 MARK “OZ” GEIST (Former U.S. Marine): We knew that to get out we were going to have to depend on each other— and simple. I mean, kill them before they kill you.

CHANG: Mark Geist known as Oz, Kris Paronto, known as Tonto and John “Tig” Teigen were three of six elite former commandos who volunteered to mount a rescue operation when terrorists attacked the diplomatic residence a mile away from their secret CIA base. A lot of people misunderstand contractors. They think they're either adrenaline junkies or they’re mercenaries out for money.

KRIS “TANTO” PARONTO (FORMER U.S. Marine): We are going to give our life for others if you need us to do it. We’re going to do it. That’s how we’re bred.

PARONTO: Not my concern.

GEIST: You know who I hold accountable? Ansar al-Sharia.  That’s who attacked them. That’s who killed the ambassador. That’s who launched the mortars.

CHANG: Led by actor John Krasinski, 13 Hours is the men’s account of that night’s battle, which killed four Americans including Ambassador Christopher Stevens. Although the CIA calls the claims a distortion of events and people.

JOHN KRASINSKI (Actor, 13 Hours): The most important thing that I hope people are surprised by is how little if any politics are involved in the movie because we had the luxury of all the politics came after this night. So when these guys were trying to survive and trying to save people there were no congressional hearings. There were no e-mails. There were no opinions.

CHANG: To take on the physically Krasinski, known for his comic charm in The Office [clip from The Office] trained hard core. Going from 26 percent body fat to just five in four months.  Do you see yourself as an action star now?

KRASINSKI: I've always seen myself—  No. I'm just kidding. Getting in the shape and doing these things are definitely unlike anything I ever thought I would be doing.