ABC, NBC and CNN on Sunday and Monday couldn’t get enough of Saturday Night Live mocking “America’s love affair with guns.” NBC’s Today replayed the entire sketch on Sunday and then hyped it again on Monday. On Monday’s Good Morning America, co-host Robin Roberts enthused that comedian/gun control activist Amy Schumer was “all over social media this weekend!”

In contrast, a SNL segment going after the “stomach-churning” Planned Parenthood videos was ignored on Today and GMA. On Monday, Natalie Morales touted, “People are still buzzing... about [Schumer’s] fake public service announcement mocking what they portray as America's love affair with guns.”

NBC played footage of Schumer appearing with liberal New York Senator Charles Schumer as he advocated for gun control. Morales also reminded, “It's an issue Schumer has also targeted on her Comedy Central show, joking about how it's easier to get guns than birth control.” 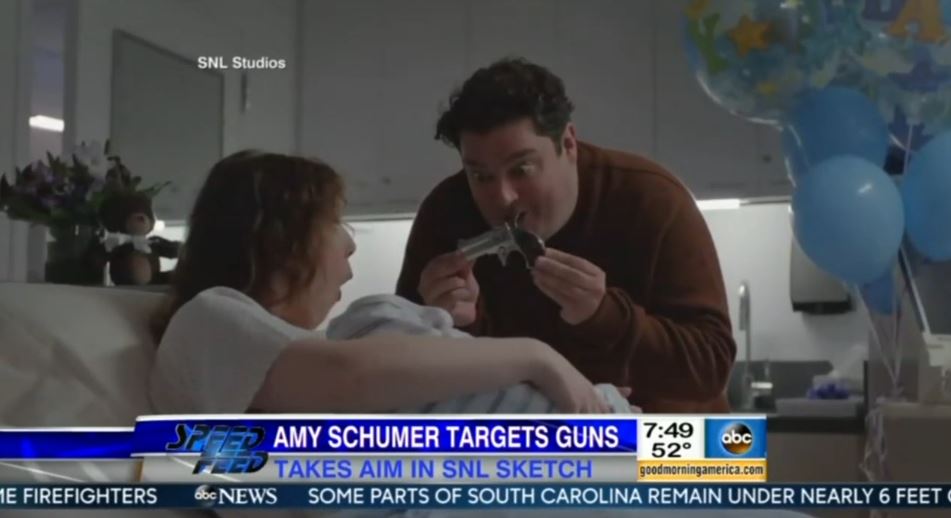 The sketch shows Americans sleeping next to guns, giving weapons to babies and caressing significant others with firearms.

On GMA, reporter Jesse Palmer allowed that “some” thought the sketch was “too soon” after the Oregon shooting. But he added, “Amy Schumer no stranger to taking on controversial topics.”

During the same SNL show, the comedians mocked Planned Parenthood as “selling baby parts on Snapchat.” Neither NBC nor ABC showed any interest in promoting this skit. 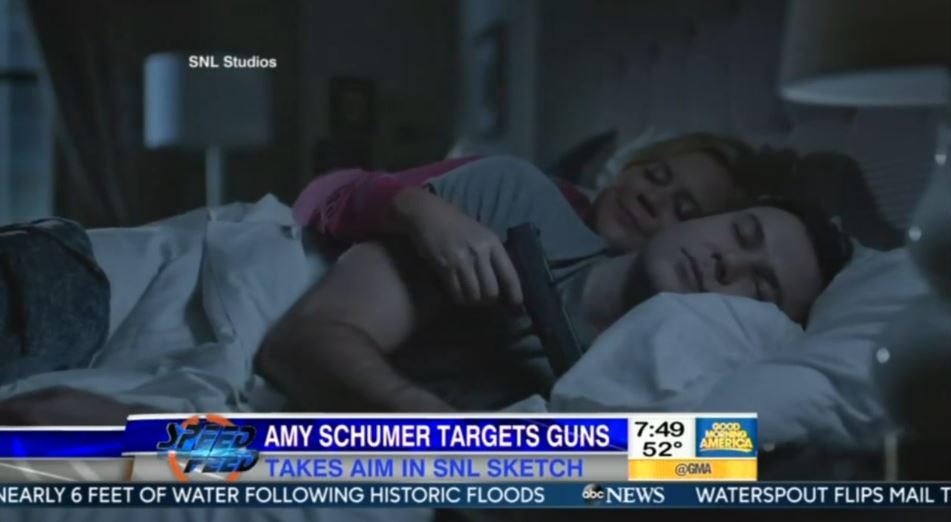 Over on CNN, Alisyn Camerota praised Schumer for “sticking to her promise” to “push for more gun control.” Reporter Michaela Pereira cheered, “I feel like she's not going to take her foot off the accelerator, either.” The CNN graphic alerted, “Amy Schumer & SNL Parody U.S. Gun Culture.”

A transcript of the October 12 Today segment on the gun skit is below: 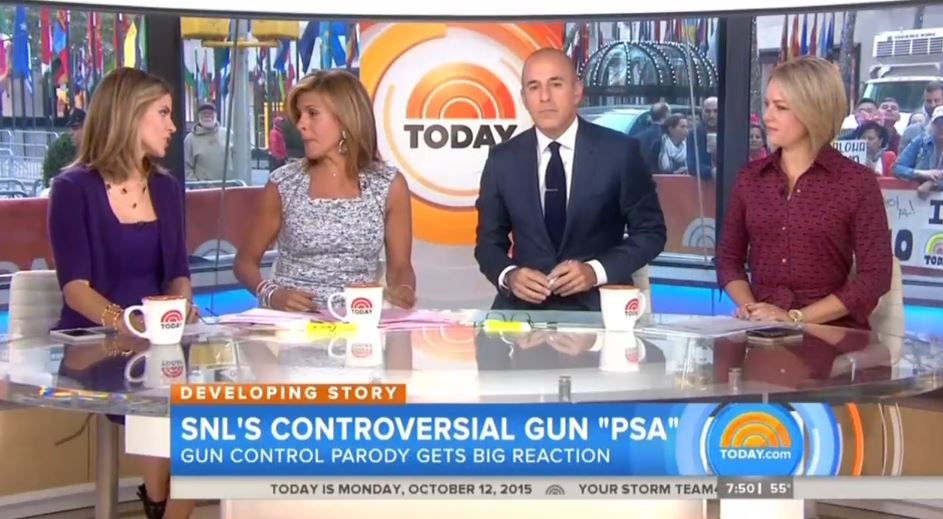 HODA KOTB: Saturday Night Live is never one to shy away from controversial topics. This weekend was no exception as host Amy Schumer took on the hot issue of gun control.

NATALIE MORALES: Well, people are still buzzing, of course, about the sketch, about her fake public service announcement mocking what they portray as America's love affair with guns. In her Saturday Night Live debut —

SCHUMER: Guns are there in little moments.

MORALES: The sketch immediately polarizing. Piers Morgan calling it brilliant but others saying it's bad timing and not funny.

SCHUMER: They unite us.

MORALES: Simply entitled Guns, it comes a week after the Oregon school shooting and also on the heels of July's movie theater tragedy where a gunman killed two and injured nine others after a Louisiana screening of Schumer's own movie Train Wreck.

SCHUMER: It's very personal for me.

SCHUMER: No one wants to live in a country where a felon, the mentally ill or other dangerous people can get their hands on a gun with such ease.

MORALES: It’s an issue Schumer has also targeted on her Comedy Central show, joking about how it's easier to get guns than birth control.

SCHUMER: No refills? I have to go through all this again next month?

PHARMACIST: Yep. See you then.

MORALES: Taking on controversy with comedy.

SCHUMER: From first loves to new beginning. Wherever life takes you, guns. We're here to stay.

MORALES: It sure is provocative. Well, we reached out to the NRA, Amy Schumer and SNL for comment but didn't receive a response.

KOTB: No one is getting back to us. What is that about? Let's go to the Orange Room. We’ve been asking viewers if they think the skit went to far. Tamron, what do you think?

TAMRON HALL: No one got to us for reaction. But our viewers online talking about it. What do you think of SNL’s gun parody? In good humor or went too far? The results already, 83 percent said all in good humor. Seventeen percent said it went too far. Keep your comments coming to us and we’ll keep monitoring. But quite a debate this morning, guys.

LAUER: Yeah. I'm not sure about if it made the humor part of it. But was it powerful or not? It will be interesting to see what people think about that.