ABC's Nightline, a program that can barely be bothered to cover the 2016 presidential election, on Wednesday night devoted over seven minutes to a hippie commune in Virginia where residents are given an allowance and children are raised by everyone.

Touting this socialistic paradise, co-anchor Byron Pitts enthused, "You know the old adage 'it takes a village.' Well, the people you're about to meet are taking it pretty literally on a commune where they share child-rearing, housing, even their incomes."

Regarding a place where there are no televisions, bank accounts or "high paying jobs," the journalist romanticized, "For this simple life, living off this beautiful land, eating organic vegetables they grow themselves, sharing everything from clothes to housing to child care and sometimes changing their names, do they know the secret to the good life?" 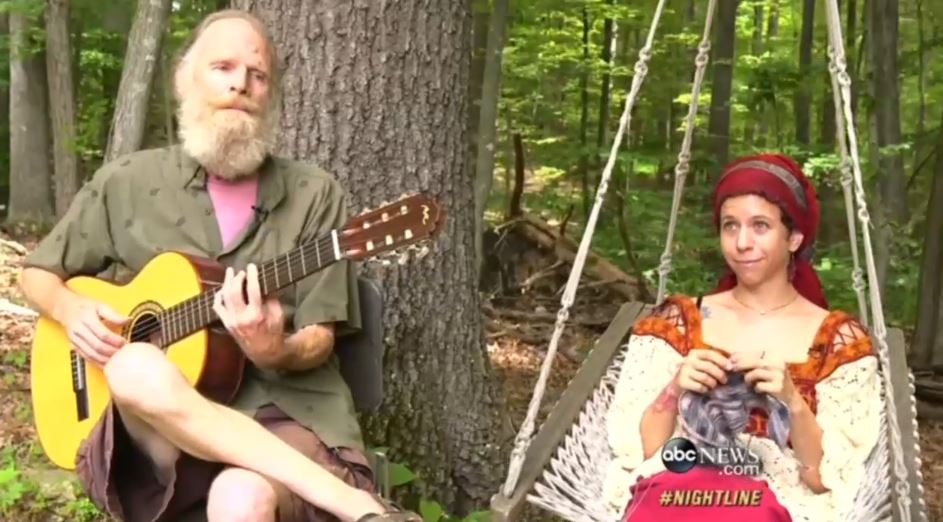 BYRON PITTS: every personal decision has to be made collectively, even having a child.

KATHERYN SIMMONS (TWIN OAKS RESIDENT): Having a child is not something you can take for granted, that you can just decide to do on your own because you're not personally responsible for financing that kid's upbringing, the entire community is. 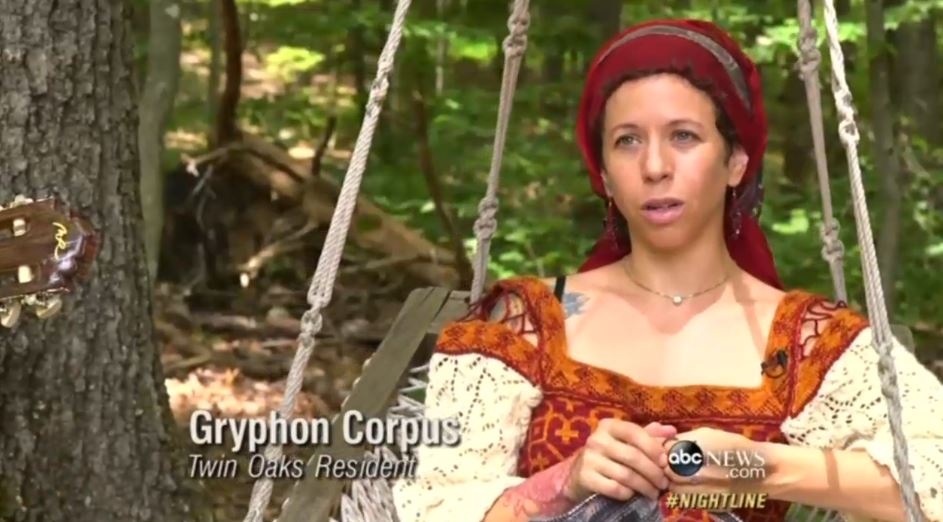 Reiterating the Hillary Clinton talking point, he continued, "Everyone is a parent of sorts here, going along with the motto, 'it takes a village to raise a child.'" After one of the residents talked about getting an allowance, Pitts complimented, "This might not appeal to everybody, but for some it makes sense."

The journalist offered little in the way of skepticism towards the group. However, he did manage to question the commune's lack of a background check for new residents: "To someone like me from the outside, that's scary."

A partial transcript of the August 20 segment is below. [Note this is Wednesday night's edition of Nightline, but it aired in the early hours of Thursday morning.]

REBECCA JARVIS: You know the old adage "it takes a village." Well, the people you're about to meet are taking it pretty literally on a commune where they share child-rearing, housing, even their incomes. They can't have their own cars or a TV. So why there is a wait list to get in? "Nightline" co-anchor Byron Pitts headed to the property to find out how they make it all work. 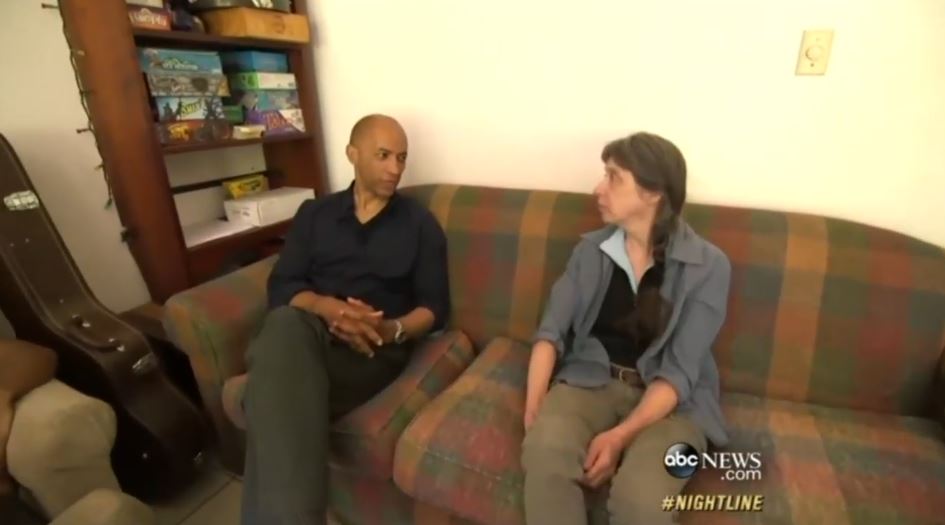 MAN: It's a been out there for many, many years. It's kind of a hippie place down there.

IMANI CALLEN: Some kind of cult where everyone gets naked and worships whatever. I've heard things like that, which couldn't be farther from the truth.

PITTS: 22-year-old Imani Callen works at this cafe in Louisa.

CALLEN: I love my job. My name is Imani Callen and I lived at Twin Oaks for 19 years.

PITTS: Imani grew up in that hidden community in the woods, a commune called Twin Oaks, where 92 adults, 13 kids, live on 450 acres, giving up what many of us think of as the necessities of life, television, bank accounts, high-paying jobs.

KEENAN DAKOTA: The American dream is to become wealthy and this is not the place to do that.

PITTS: For this simple life, living off this beautiful land, eating organic vegetables they grow themselves, sharing everything from clothes to housing to child care and sometimes changing their names. Do they know the secret to the good life?

CALLEN: As a small child, it was awesome to live here. It was fun. You had all these people to hang out with and interact with and especially just when you want to like run wild as a kid.

PITTS: But the commune life doesn't come without sacrifices. Each adult is responsible for working 42 hours a week. And at Twin Oaks, which has been in operation for 48 years, every personal decision has to be made collectively, even having a child.

KATHERYN SIMMONS (TWIN OAKS RESIDENT): Having a child is not something you can take for granted, that you can just decide to do on your own because you're not personally responsible for financing that kid's upbringing, the entire community is.

PITTS: They make their money making tofu and selling hammocks that gross about $2 million a year and share the income.

HILDA OTT: We get an allowance.

PITTS: Allowance? I haven't heard that word since I was in middle school.

OTT: We get an allowance and that changes from year to year, but for things that we want, like chocolate or coffee.

PITTS: This might not appeal to everybody, but for some, it makes sense.

GRYPHON CORPUS (TWIN OAKS RESIDENT): It's nice to have a three-bedroom house with lots of lovely furniture, but they're nothing compared to the sense of supportiveness.

PITTS: Gryphon Corpus was the CEO of a luxury yarn company and just moved here with her ex-husband and 8-year-old daughter Sapho (PH) .

SAPHO (TWIN OAKS RESIDENT): It's pretty much free range the whole day. Like, you can do whatever you want.

PITTS: Everyone is a parent of sorts here, going along with the motto, it takes a village to raise a child.

PITTS: There's a wait list to live here, but there are no background checks. To someone like me from the outside, that's scary. To think that it's possible that someone could move here, you don't know their background, and they could be a threat to children.

PITTS: It's easy for the children to get lost in those 450 acres.

TWIN OAKS RESIDENT (FEMALE): We are going to look for Grace and Anya. A 6-year-old who is watching a 1-year-old.

PITTS: When they need to run an errand, they check out one of the communal cars from the main office.

KEENAN DAKOTA (TWIN OAKS RESIDENT): So this is Aluminum Falcon, this is Denty Gray, this is Funky Banana.

PITTS: The cars have names?

DAKOTA: Only because you have to know which car you're taking. I don't drive the same car every day. I use a car once a month or once every two months. I'm Keenan Dakota. I've lived at Twin Oaks for 32 years. This is my son Rowan, who was born at Twin Oaks and has grown up here.

PITTS: Before moving here, his name was Daniel Edward (inaudible), a former student body president at George Mason University. He came to Twin Oaks to give a talk and never left.

DAKOTA: I mean, I feel like when I came to Twin Oaks when I was 23 that I kind of retired. You know? Life was kind of easy. I feel like, you know, there's not that much work to do. It's not that hard to do the work that there is here.

PITTS: Keenan's son Rowan grew up here fulfilling his work credits by farming. He's now taking college classes at the local community college and tells us growing up on a commune hasn't made it easy for him to meet friends in the outside world. But it's a tradeoff he doesn't mind. Do you think you'll always live here?

DAKOTA: Yeah, I mean, I definitely kind of want to explore the world a little bit more. Like, I've gone to other countries and stuff, but I don't think I've actually, I don't really know what it's like to live in the US. Like Twin Oaks seems like it's sort of its own little pocket of something else.

PITTS: While the kids who grow up here seem mature beyond their years, the same can't always be said for the adults.

KEENAN DAKOTA (TWIN OAKS RESIDENT): So we're walking to Kuwea (PH), which is the most recently built residence. This is where I live. There are 22 people who live here.

PITTS:  I mean, this is a big house. But is it 22 people big? Out of the 50 children raised to adulthood here, only three have stayed. Imani moved out when she was 19 and has no regrets.

IMANI CALLEN (GREW UP IN TWIN OAKS COMMUNITY): Growing up here made me a lot of, like, who I am as a person now. But that doesn't –  and I'm thankful for that. But now I wouldn't come back.