Activist ABC journalist Tom Llamas on Friday took to his third straight program to rail against using the term "anchor baby." Llamas's confrontation with Donald Trump aired on Thursday's Good Morning America and World News. The reporter replayed it yet again on Friday. Llamas yelled, "Are you aware the term anchor baby, that an offensive term? People find that hurtful!"

As though he were some sort of neutral third party observer, the correspondent covered the furor he helped create: "Now, both Trump and Bush are facing tough questions about the term anchor babies used to try American-born children of undocumented immigrants, implying parents have children to anchor themselves in the U.S. so they're not deported." 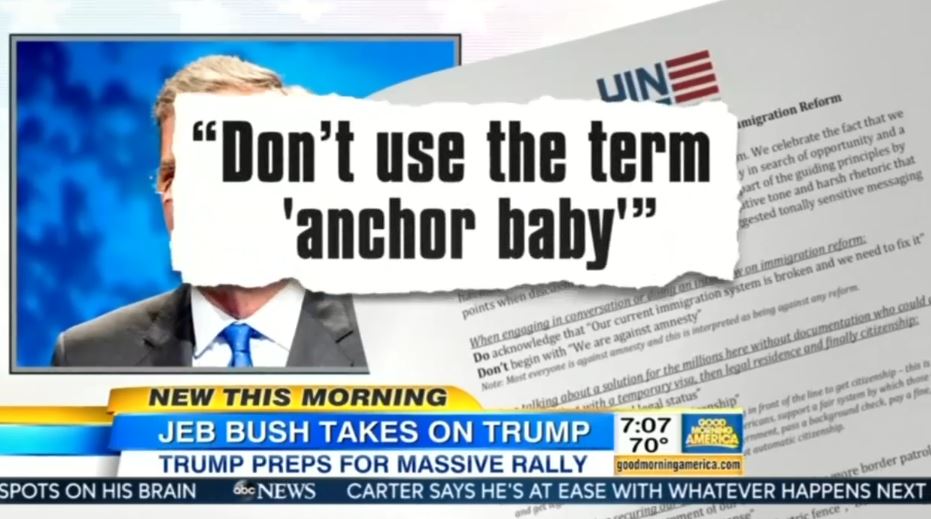 On Thursday's World News, Llamas scolded Bush for using the words, calling this "bombastic language." On Wednesday's GMA, he yelled at Trump for the first time. On Tuesday, he screamed questions at Trump's newly announced immigration policies: "How would you do it?... What would you tell a child of an undocumented immigrant? What would you tell that child born in the U.S.?"

A transcript of the August 21 segment

AMY ROBACH: Now to your voice, your vote, Donald Trump holding a pep rally tonight in Alabama. So many people expected to show up, it had to be moved to a bigger venue. And the battle between Trump and Jeb Bush heating up. Jeb attacking Trump on his immigration policy. ABC's Tom Llamas has been following it all and has the latest from Atlanta, Georgia this morning. Good morning, Tom. 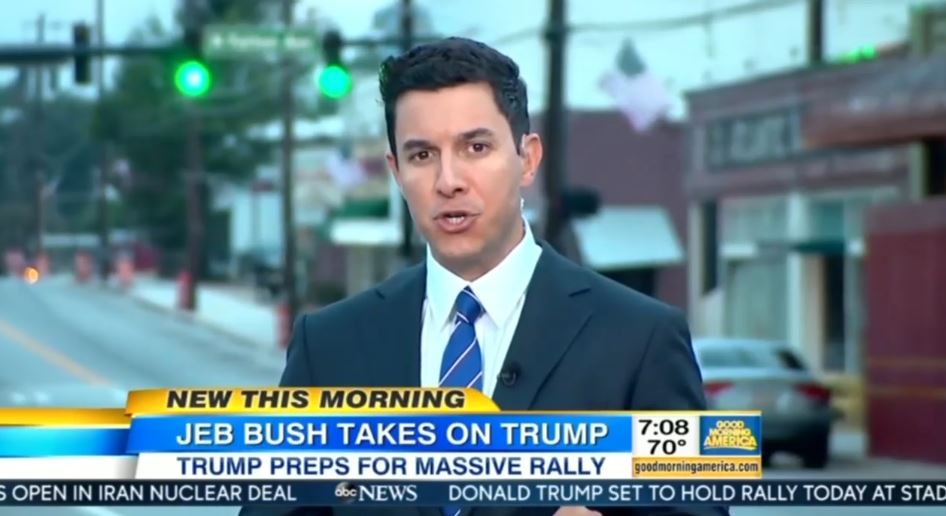 TOM LLAMAS: Amy, good morning to you. That Trump event tonight set to be his biggest ever. And as the billionaire rides this wave of popularity, one candidate is trying to take him head on. This morning, Jeb Bush trying to put an end to the summer of Trump.

JEB BUSH: He's been a Democrat longer than being a Republican.

LLAMAS: In New Hampshire fighting back after Trump mocked his smaller crowds, Wednesday and what Trump calls his lack of charisma.

DONALD TRUMP: Jeb Bush is a low-energy person. For him to get things done is hard. 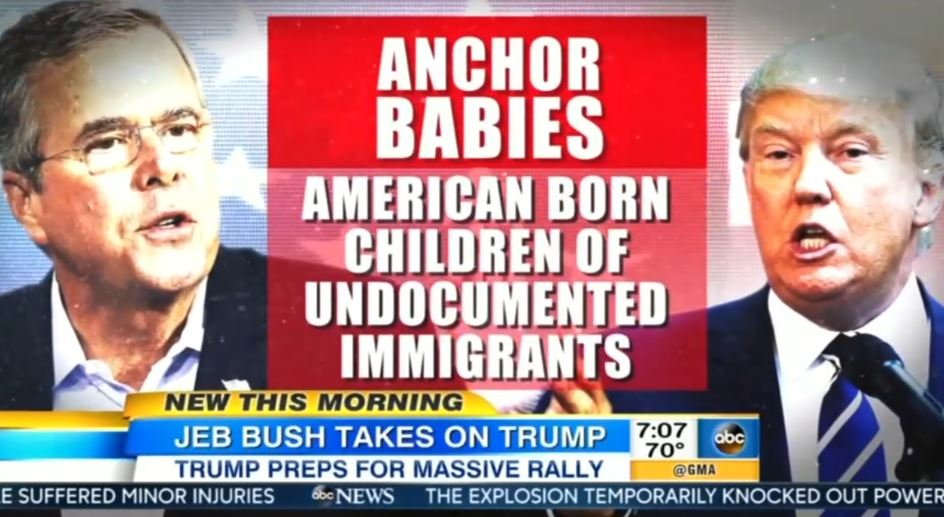 BUSH: The immigration policies he has brought up aren't -- they're not conservative either. It's going to cost hundreds and hundreds of billions of dollars. It'll disrupt -- Hang on. It will disrupt families.

LLAMAS: Are you aware the term anchor baby, that an offensive term? People find that hurtful!

TRUMP: You mean it's not politically correct and yet everybody uses it.

LLAMAS: Now, both Trump and Bush are facing tough questions about the term anchor babies, used to try American-born children of undocumented immigrants, implying parents have children to anchor themselves in the U.S. so they're not deported.

BUSH: No. Do you have a better term?

BUSH: You give me a better term and I'll use it. I'm serious. Don't yell at me behind my ear though.

LLAMAS: But just two years ago Bush co-chaired a Hispanic outreach group that sent a memo to Capitol Hill suggesting conservatives shouldn't use the term anchor baby. Hillary Clinton later offering up suggestions on Twitter, tweeting "How about babies, children or American citizens." Now, in New Hampshire Trump says that he believes Bush and other candidates are going to spend huge amounts of money to tear him down. But this morning, The Washington Post reports that the head of the Jeb Bush super PAC says they not going to spend a dime on Trump and they're hoping in the end it's a matchup between Trump and Bush, David.

MUIR: All right, Tom llamas with the tough questions out there on the campaign trail.