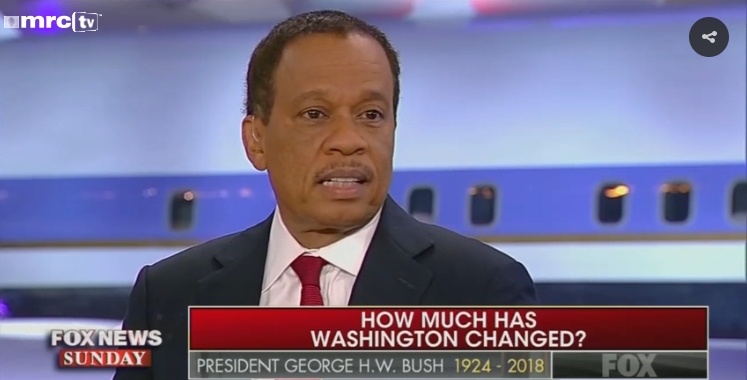 During Sunday’s edition of Fox News Sunday, host Chris Wallace reported from the Reagan Presidential Library in Simi Valley, California; where he and his panel reflected on the life of Former President George H.W. Bush. Liberal panelist Juan Williams used the opportunity to praise Bush and contrast him favorably against President Trump; not an uncommon occurrence over the past 48 hours. Williams specifically focused on the difference between the two Presidents’ relationships with the National Rifle Association.

Williams described the contrast between President Bush and President Trump as “optimism versus pessimism,” contrasting the gentlemen’s two slogans, “a kinder, gentler America versus American carnage.” Williams also praised Bush’s allegiance to Reagan’s 11th Commandment of not speaking ill of a fellow Republican and contrasted that with President Trump, “who has a polarizing relationship with Democrats, clearly fractured, but also attacks other Republicans who don’t agree or embrace him.”

Isn’t it amazing how liberals in the media and Democrats learn to love Republicans after they leave office or die?

Finally, Williams praised the 41st President for severing ties with the NRA in the wake of the Oklahoma City bombing and contrasted that with President Trump, who suggested arming teachers in the wake of the Parkland school shooting and continued to business with the NRA. Wallace pushed back on Williams’s criticism of President Trump, saying: “I’m not sure...that I would go along with the attack on President Trump because, frankly, not to say that he doesn’t make mistakes and hasn’t done some things wrong, but I think there’s a culpability on all sides here.”

Williams has good company among liberal commentators and supposedly objective journalists who have used the death of President George H.W. Bush to bash President Trump or highlight the late President’s deflections from conservative orthodoxy. For example, The View co-host Joy Behar praised Bush for signing into law the Clean Air Act Amendment of 1990 before slamming President Trump for “trying to unravel everything that he did and Obama did.” MSNBC’s Andrea Mitchell praised Bush for abandoning his campaign promise not to raise taxes.

The liberal media’s favorable coverage of President Bush comes across as quite a change of pace compared to their coverage of the President when he was actually in office. While most of the media have portrayed the longest-living President in United States history in a favorable light in the past 72 hours, some could not manage to put aside their hatred for conservatives and Republicans for even a day or two. CNN and MSNBC tried to paint the late President as a racist for his “Willie Horton ad” while Slate complained that “obituaries for George H.W. Bush have largely left out groping allegations.”

A transcript of the relevant portion of Fox News Sunday is below. Click “expand” to read more.

CHRIS WALLACE: I want to get back, Juan, to the original question that I asked Karl. You and I had the great good fortune to cover Presidents Reagan and Bush back in the ‘80s. And to me now, it seems like a different world in terms of government’s ability, the leaders in government, and the various different factions to come together, to compromise, and to solve our problems.

JUAN WILLIAMS: No question, Chris, we live in a polarized political age today, so divided. You know, the way I think of it is Chris is sort of optimism versus pessimism. Morning in America, a kinder, gentler America versus American carnage as a message coming from the leader to the American people. So when I think of President Bush, I think of someone who crossed the aisle, you know, I was really taken by what Karl just said about his best friend being a Democrat while he served those two terms in Congress, and of course he followed Reagan’s pronouncement, 11th Commandment, speak no evil of another Republican versus Donald Trump, who has a polarizing relationship with Democrats, clearly fractured, but also attacks other Republicans who don’t agree or embrace him. And again, I think also on policy issues like guns, you know, after Oklahoma City in ‘95, President Bush quit the NRA, quit his lifetime membership. After what happened in Parkland, Florida, you see President Trump not only say that we should arm teachers, but continue to do business with the NRA.

WALLACE: I’m not sure, Liz, that I would go along with the attack on President Trump because, frankly, not to say that he doesn’t make mistakes and hasn’t done some things wrong but I think there’s a culpability on all sides here.