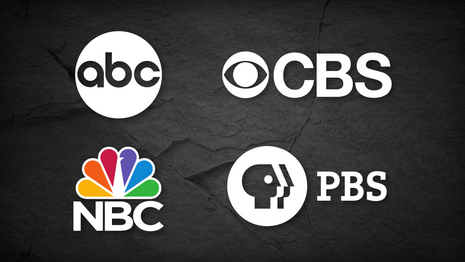 This might be a surprise — if you want traditional “hard news” served up in an efficient 30-minute package, the best place to find it may still be one of the Big Three evening newscasts, where more than 70 percent of the typical broadcast fits the definition of old-fashioned reporting. And, compared to cable news, ABC, CBS and NBC present viewers with news about a much wider array of topics.

Earlier, NewsBusters reported on a study of 108 randomly-selected hours of CNN, MSNBC and Fox News programming from February 1 to June 30. Today, we’ll share the results from an equivalent analysis of 26 randomly selected hours of ABC, CBS, and NBC morning and evening news shows, plus our review of four random hours of PBS’s NewsHour. (Detailed methodology below.)

First, the “hard news.” While only 22.3 percent of cable news fit the definition of hard news (a report from a correspondent in the field, live coverage of a breaking news event, or a brief anchor-read item), 50.1 percent of ABC, CBS and NBC’s coverage consisted of hard news. The highest ratio of hard news (71.7%) came during the evening news shows, followed by the 7am ET hour of the morning shows (60.9%). While the superficial second-hour of each morning show was only 24.9 percent “hard news,” even that’s still a bit better than the cable news average of 22.3 percent. 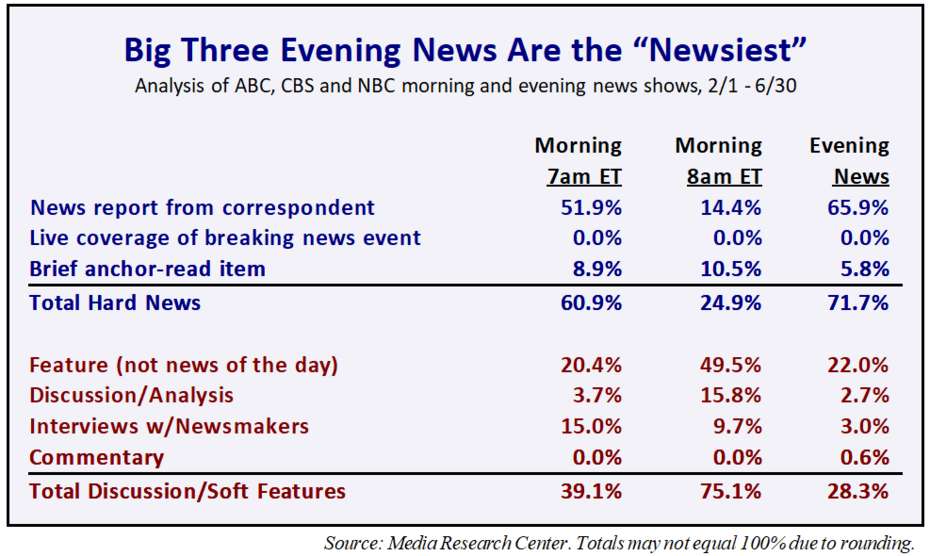 But that’s still better than their cable competition: our analysts found that the average hour of cable news contains just nine minutes, 15 seconds of hard news (vs. about 18 minutes of commercials).

While cable fills its time with talk show discussions about politics, the non-hard news elements of the Big Three broadcast shows mostly consisted of pre-planned feature reports that had essentially no connection to the news of the day. This is especially true of the morning shows, where such features were the most ubiquitous element: 35.9% of total coverage (20.4% during the 7am ET hour, rising to 49.5% in the 8am ET hour). 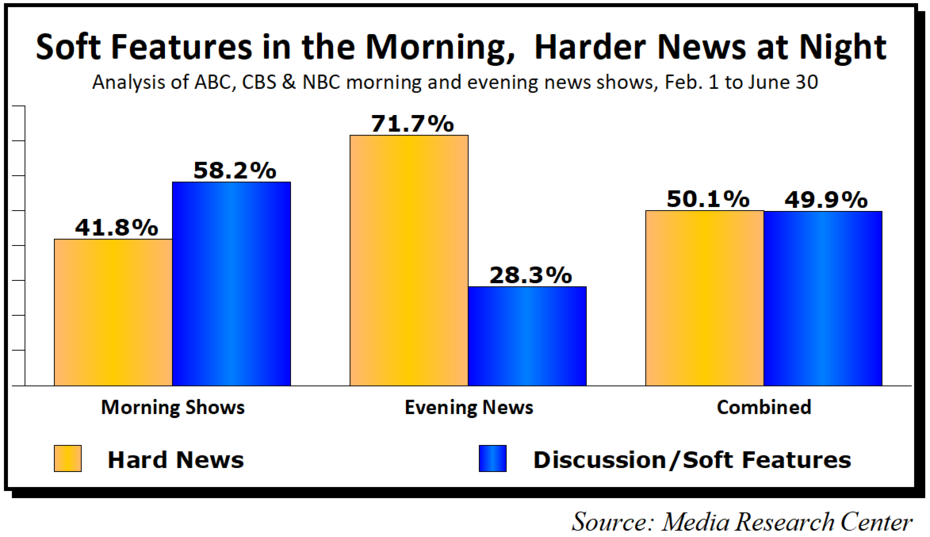 Broadcast news also has a far more varied menu than cable. While politics utterly dominates cable, it was only the third most frequent topic in our survey of ABC, CBS and NBC morning and evening news shows. Health news (mostly the pandemic) accounted for 18.8 percent of all airtime, followed by crime (14.7%) and only then reaching U.S. politics (13.9%). 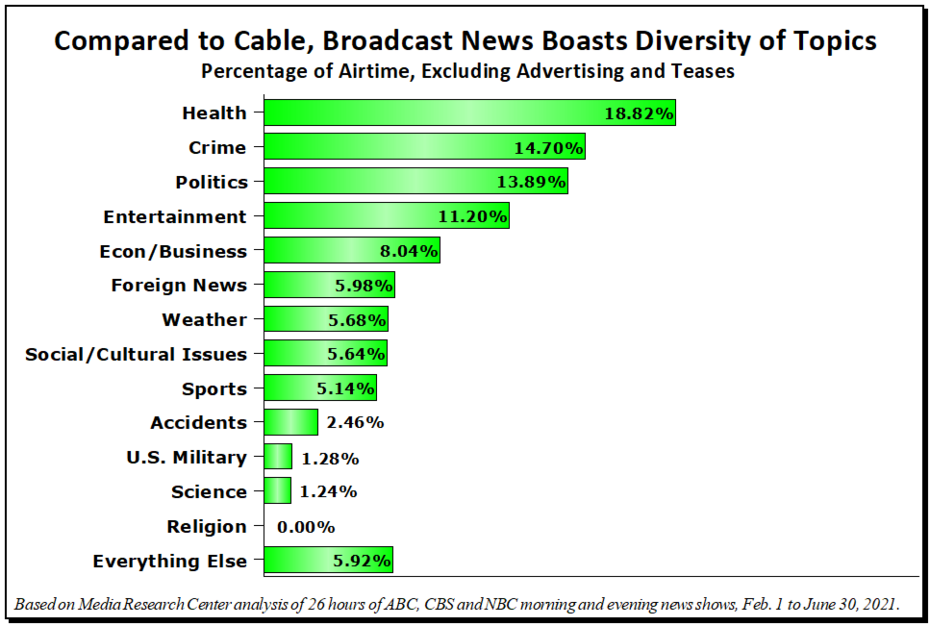 Entertainment, economy and business news, and even foreign news were all a greater share of broadcast news than today’s cable news. These topics barely registered on cable, which spent more than three-fifths of all airtime (60.3%) on U.S. politics.

In addition to the three commercial networks, our analysts also looked at four randomly-selected hours of PBS’s NewsHour. They found that the format more resembles today’s cable news than its broadcast brethren: After a short summary of the day’s news (comprising 19.2% of airtime), most of the show (51.6%) was spent on discussions with non-newsmaker guests (other journalists, think tank experts, etc.) and feature reports (21.9%). The remaining airtime (7.3%) consisted of two interviews with an actual newsmaker (in our sample, Massachusetts Senator Elizabeth Warren and New Jersey Governor Phil Murphy, both Democrats).

Neither this study nor our matching study of cable “news” were designed to rate the bias or the quality of the programming on these networks. Our goal was merely to quantify the changes we’ve seen over the years, especially in cable news, as journalists have moved away from “just the facts” reporting in favor of perpetual roundtable analysis of current events, mostly politics.

But as tens of thousands of other articles on NewsBusters have amply documented, there’s nothing about this shift in format that has meant better, fairer, or less biased coverage for those who watch the news. Indeed, as cable news has increasingly shoved fact-based reporting aside, what’s left is little more than hours of predictable commentary from hosts and guests alike.

Detailed Methodology: For this study, meant to match our study of cable news, MRC analysts randomly selected four examples of the weekday ABC, CBS, NBC and PBS evening newscasts from between February 1 and June 30, as well as three examples of each hour (7am and 8am ET) from the ABC, CBS and NBC morning news shows. For each morning show, the hours we examined were chosen independently. The 7am hours of ABC’s Good Morning America, for example, were April 21, May 17 and May 26; the 8am hours for the same show were March 23, April 29 and June 30. Weekends and holidays were excluded.

This sampling method ensured our study would not be influenced by the news events of any given day, but would broadly represent broadcast news content over a five-month period. Analysts then reviewed each selected program or hour, noting the time when each segment began and ended, the length of each segment, and classified each segment by type (news, live event, discussion, interview, commentary, etc.) and topic (politics, health, foreign news, crime, etc.). Teases for upcoming topics and commercials were not included in any of the totals. The results were then sorted to determine the total airtime and percentage of airtime devoted to each type of coverage.