CBS: Mondale ‘Won the Argument’ With Reagan Over Government 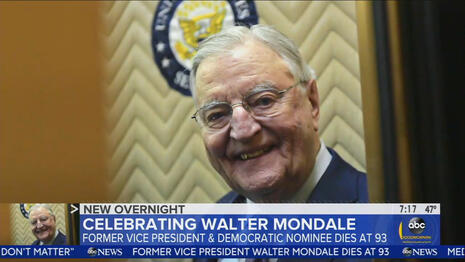 All three broadcast network morning shows paid tribute to the late former Vice President, and 1984 Democratic presidential nominee, Walter Mondale on Tuesday, but only NBC’s Today actually permitted the “L” word — “liberal” — to be heard on their airwaves.

On ABC’s Good Morning America, correspondent Mary Bruce avoided mentioning the strong liberal stance that cost Mondale 49 out of 50 states in the 1984 general election, while CBS This Morning co-anchor Tony Dokoupil claimed Mondale — “a self-described progressive” — ultimately “won” his ideological argument with former President Ronald Reagan, as Dokoupil insisting that today “government is not the problem in people’s lives that Reagan described.” 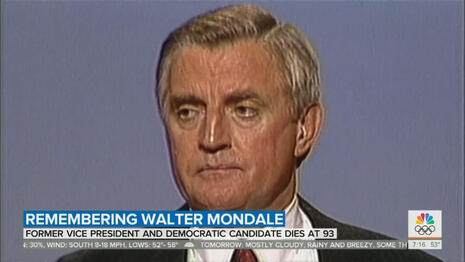 NBC’s Tuesday morning tribute was also the only one to play the famous soundbite of Mondale in his 1984 convention speech: “Mr. Reagan will raise taxes, and so will I. He won’t tell you. I just did.” Liberal journalists thought the promise of higher taxes was just fantastic, but it turned a likely defeat for the Democrat into an historic landslide that came within just a couple of thousand votes of becoming a 50-state wipeout.

Looking through the MRC’s archives, the liberal media have always been a bit schizophrenic about how they’ve described Mondale’s ideology. At the 1984 convention, CBS anchor Dan Rather tried to paint the ticket as conservative: “This Democratic platform calls for not a single new domestic spending program. In other words, the party continues to march toward what some would call the center, others would say the right.”

In 1992, as the Democrats nominated Bill Clinton and Al Gore, New York Times reporter David Rosenbaum was nostalgic for Mondale’s liberalism: “The views that dominated the party for so long, what was once proudly called liberal, are hardly in evidence in Madison Square Garden this week....Mr. Mondale, who in 1984 was the last down-the-line liberal to win the Democratic presidential nomination and who lost 49 states to Ronald Reagan in November, said he was resigned to the change.”

In 2003, as the very liberal Vermont Governor Howard Dean surged in primary polls, some journalists denied that any recent Democratic nominee, including Mondale, could be considered liberal. “Ever since the George McGovern disaster of 1972, the party has routinely chosen technocratic moderates for standard-bearers,” Time’s Joe Klein fretted in a May 19, 2003 cover story, “Why They Don’t Make Democrats Like They Used To (And How to Fix It).”

“The rap on Dean is that he’s like Dukakis and Mondale and McGovern,” former CNN and NBC reporter Ken Bode argued on Chris Matthews’s syndicated Sunday show. But, Bode claimed, “Dukakis was no liberal and neither was Mondale. Both of them had several people to the left in those primaries. It was what the Republicans did to them once they got the nomination that made them seem to be liberals in both cases.”

In Mondale’s final foray into the political fray, as the last-minute fill-in candidate after Minnesota Senator Paul Wellstone’s death in an October 2002 plane crash right before the general election, Time’s Jessica Reaves joined the media camp of those who saw Mondale as a liberal and liked what they saw: “Mondale, like Wellstone, is a reminder of what the Democratic Party once stood for.... A Democrat from back when the party hewed to the left on most social issues, Mondale is likely to pick up Wellstone’s liberal banner as his own.”

In 1985, the Los Angeles Times polled 2,700 journalists at 621 newspapers across the country. By a two-to-one margin, reporters had a negative view of then-President Ronald Reagan and voted overwhelmingly for Mondale in 1984, 58% to 26%, even as the country picked Reagan in a 59% to 41% landslide.

If only the media had voted in 1984, we’d be remembering “President Walter Mondale” today.