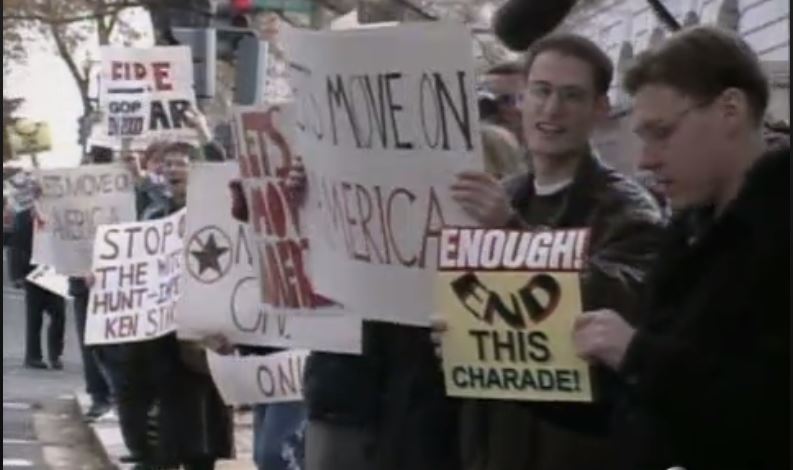 In today’s political climate, an observer would be roundly mocked if they suggested President Trump is the victim of a “spiteful” “witch hunt,” or even a “coup d’etat;” that investigations must take a back seat because the White House must “get on with the business of governance;” and that the media need to say they’re “sorry” to the President because after all of the coverage, no “impeachable offenses” have been found.

But during the Clinton impeachment drama in 1998 and 1999, liberal journalists trotted out all of those claims as a way to deflect and defend a Democratic President who was impeached for, among other things, obstruction of justice — the same transgression journalists are associating with President Trump. Here’s just a quick sample of media spin from that era:

■ “Has anybody in the history of America, any President certainly, had his character so trashed, so publicly, for so long? I think the answer is no and I think Mr. Clinton is probably personally damaged by that.”
— Correspondent Bruce Morton on CNN’s The World Today, April 1, 1998.

■ “We don’t live in Salem and I think the country is sick of the witch hunt.”
— Newsweek’s Eleanor Clift on the McLaughlin Group, April 4, 1998.

■ “Will all of the media, including NBC, give even a fraction of the airtime and the newsprint that we gave to these allegations to the fact that no impeachable offenses were found? When are we going to say to the President of the United States, ‘we’re sorry’?”
— Host Geraldo Rivera on CNBC’s Rivera Live, September 14, 1998.

■ “Didn’t I say to you that we are marching off the cliff? Reason tells you we should stop this and get on with the business of governance. But, there is precious little. I mean, I spent most of today and yesterday half on the phone while I was covering this thing, with Senators Republican and Democratic, and at the moment everybody’s fondest hope is that the two week hiatus, between now and the new year, in that period, impeachment will sink in and sanity will prevail and we’ll avoid a trial. But there are a lot of people that don’t want that to happen.”
— National Public Radio’s Nina Totenberg, December 19, 1998 Inside Washington.

■ “Why are you convinced of that [that the Senate trial would be speedy], because many people have been talking about a long, protracted trial taking attention away from the important issues in this country that people really care about?”
— NBC’s Today co-host Katie Couric to Senator Mitch McConnell, December 21, 1998.

■ “It [impeachment] was a spiteful action, an action that they performed absolutely in violation of the framers intent. It was a legislative coup d’etat, and it has been rejected utterly by the American people, 73 percent of whom now say they approve of the President’s performance in office...”
— CNBC’s Geraldo Rivera on NBC’s Today, December 22, 1998.

■ “When you talk to other Senators, particularly older Senators — those who’ve been around for a bit — is or is there not some concern of the public, concern in some quarters, not all of them Democratic, that this is in fact a kind of effort at a quote ‘coup,’ that is you have a twice-elected, popularly-elected President of the United States, and so those that you mentioned in the Republican Party who dislike him and what he stands for, having been unable to beat him at the polls, have found another way to get him out of office.”
— CBS Evening News anchor Dan Rather to former Senator Warren Rudman during CBS coverage of the impeachment trial swearing in, January 7, 1999.

■ “I think there are real questions about separation of powers and I don’t think he [Clinton] should go up there [appear before the Senate]. And second of all, that herd of managers from the House, I mean frankly all they were missing was white sheets. They’re like night riders going over.”
— Newsweek’s Eleanor Clift, January 9, 1999 McLaughlin Group.