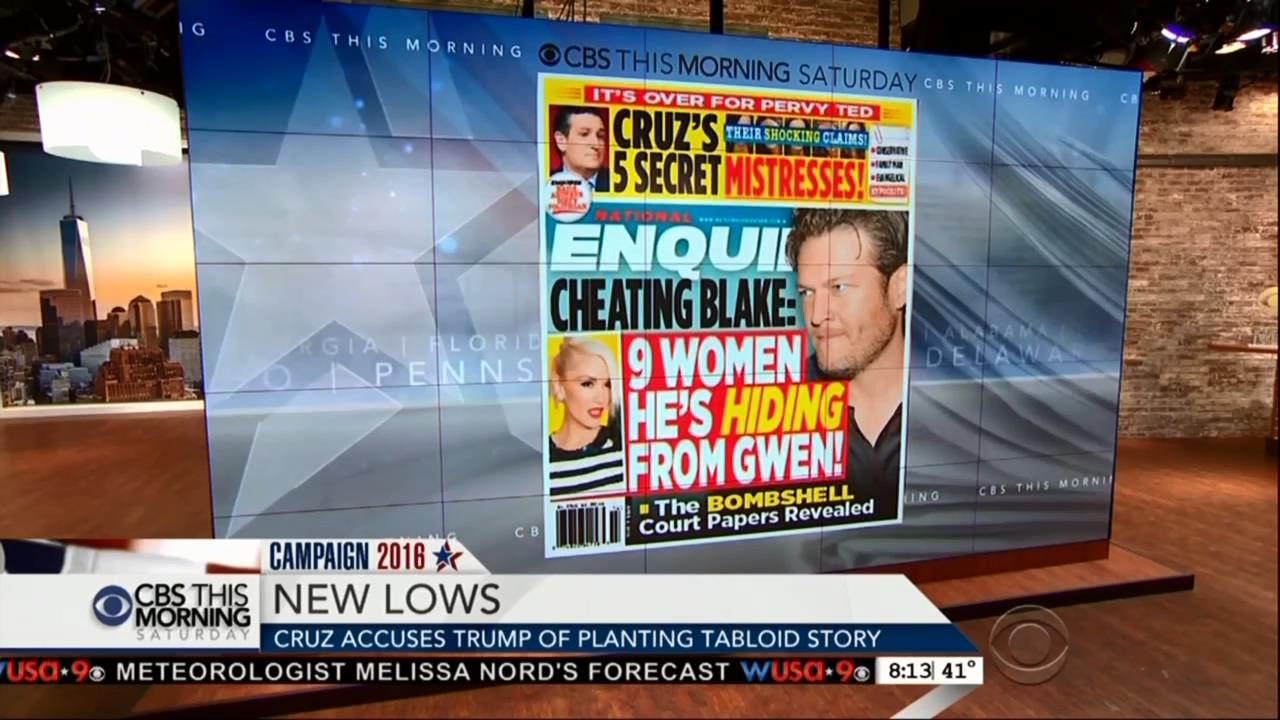 On Saturday, all three broadcast morning news shows talked about the National Enquirer allegations against GOP presidential candidate Ted Cruz, allegations for which there is still no on-the-record source or any other supporting evidence.

CBS, which took the high road and skipped the tawdry allegations on Friday’s Evening News, this morning offered a 68-second item read by CBS This Morning: Saturday co-anchor Anthony Mason, which cast the matter as a “he said, he said,” between the two candidates.

ABC’s Good Morning America offered a full report from weekend political correspondent Devin Dwyer, in which Dwyer unfortunately cast both Cruz and Trump as guilty of soiling the campaign discourse: “On one of the most solemn days of the year for Christians, Good Friday, the Republican frontrunners descended into a battle over sleaze,” Dwyer fretted.

As she did on Friday’s Nightly News, NBC correspondent Hallie Jackson was the most thorough in explaining the many reasons to doubt the Enquirer story, listing the tabloid’s past boosting of Trump and the categorical denials of two of the women linked to Cruz in the story.

Unlike Friday, however, none of the networks on Saturday morning talked about the role of onetime Trump aide Roger Stone in promoting the Enquirer story to the media, although NBC’s Jackson showed viewers the spectacle of pro-Trump journalist Adriana Cohen hijacking a CNN interview on Friday to smear Cruz supporter Amanda Carpenter as a way to force the media to pay attention to the story.

Given that the Cruz story falls far below the normal journalistic threshold for covering such sensational claims, the only fair way to discuss it at all is to point out the evidence that it is, in all likelihood, part of a smear campaign from a political rival. NBC’s Jackson accomplished this in her report, but ABC and CBS limited themselves to merely running Cruz’s own condemnation of the story, juxtaposed with Trump’s Facebook declaration that he had nothing to do with it.

ABC’s premise that both “Republican frontrunners” had “descended into a battle over sleaze” does a disservice to Cruz, since Cruz — unlike Trump — did not attack his rival’s wife, while his attacks on Trump as “Sleazy Donald” are a reaction to what is by all journalist norms a false story being forced onto the national media by Trump supporters such as Adriana Cohen and Roger Stone.

Here’s a bit more of how each of the three networks covered the Cruz story on Saturday morning:

ANTHONY MASON: The battle between Republican presidential front-runner Donald Trump and Texas Senator Ted Cruz is escalating, fresh off their heated back and forth about each other's wives. Cruz spent much of Good Friday responding to a tabloid article that claimed he cheated on his wife.

DAN HARRIS: Back home now where the Republican race for the White House has become really a race to the bottom. Ted Cruz is now accusing Donald Trump of planting a very personal and potentially damaging story about him in a supermarket tabloid, with the candidates' wives at the center of an increasingly nasty fight We get the latest now from ABC's Devin Dwyer who is at the white house. Devon, good morning to you. 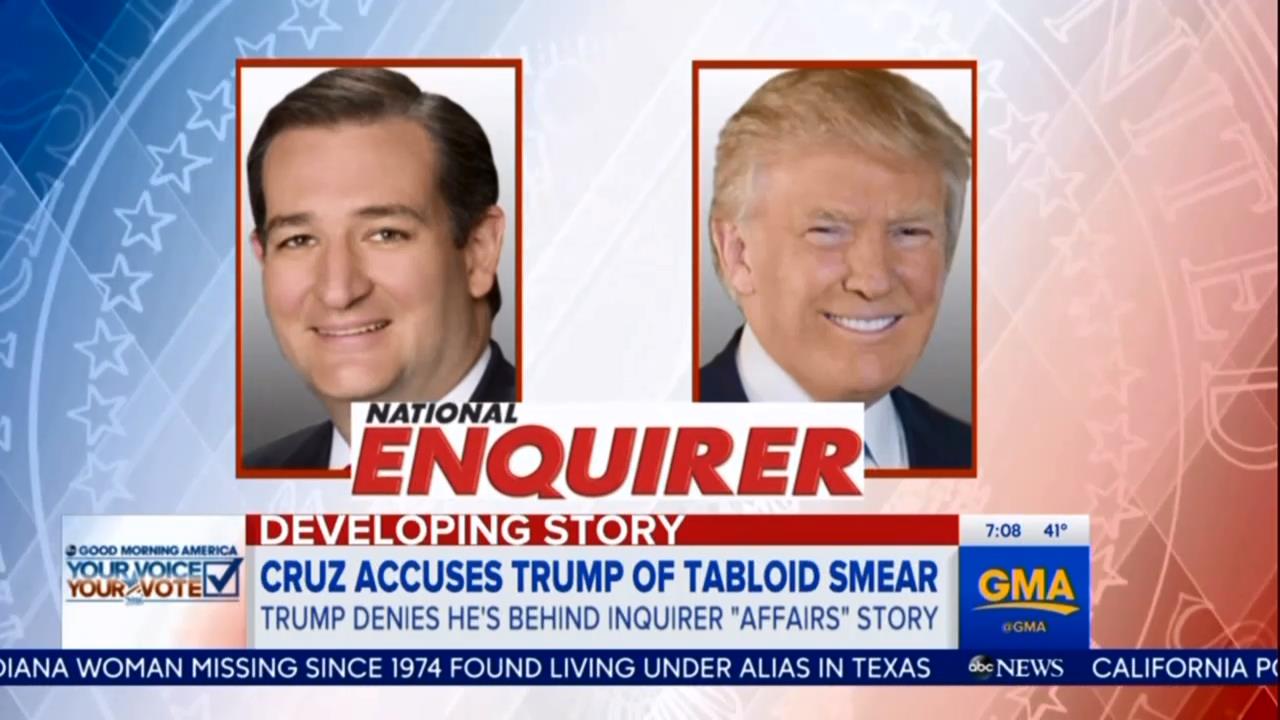 DEVIN DWYER: Yeah, good morning, Dan. You know, on one of the most solemn days of the year for Christians, Good Friday, the Republican front-runners descended into a battle over sleaze....This morning, explosive allegations from Senator Ted Cruz against Donald Trump — Cruz accusing Trump of planting a story in the National Enquirer, which claims political operatives are looking into rumors that Cruz had multiple marital infidelities....

HALLIE JACKSON: ...Arguing it’s tabloid trash, a furious Ted Cruz is firing back at the National Enquirer, denying its story claiming he had extramarital affairs.

SENATOR TED CRUZ: Let me be clear, this National Enquirer story is garbage. It is complete and utter lies. It is a tabloid smear, and it is a smear that has come from Donald Trump and his henchmen. 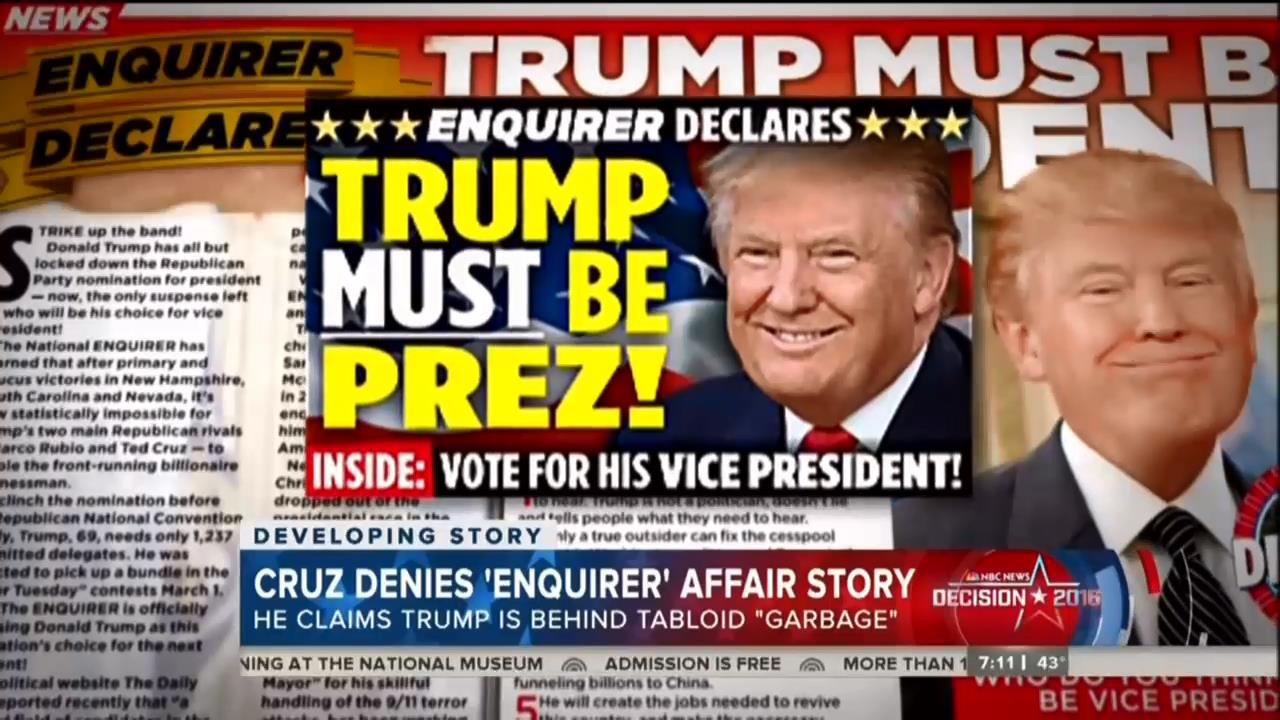 JACKSON: Trump, who’s been endorsed by the Enquirer and wrote an op-ed in its pages, says in a statement, quote, “I had absolutely nothing to do with the story,” adding he also has “nothing to do with the paper,” again calling Cruz, “Lyin’ Ted.” Cruz creating his own nickname for his rival.

CRUZ: With this pattern, he should not be surprised to see people calling him “Sleazy Donald.”

JACKSON: All of it spilling over into a tense exchange on live TV between a Trump supporter and a Cruz backer.

Columnist ADRIANA COHEN (on CNN): Where we should move to is the National Enquirer story that has reported that Ted Cruz has allegedly had affairs with at least five mistresses, including — you’ve been named, Amanda.

Cruz spokeswoman AMANDA CARPENTER (on CNN): What’s out there is tabloid trash. If someone wants to comment on it, they should talk to my lawyer. It is categorically false.

JACKSON: Another woman who’s been the subject of speculation, a former Cruz ally and current Trump spokesperson, tweeting, “of course the National Enquirer story is 100% FALSE!!!”...