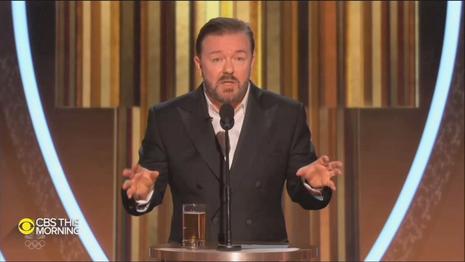 Being a comedian can be one of the most dangerous occupations during these days of political correctness. That is, if you are a comedian willing to take on both sides. Many late night hosts aren't. But Ricky Gervais clearly is.

He is on a crusade against the “cancel culture” -- which the comic describes as a “new, weird sort of fascism” -- by defending free speech wherever he can.

According to an article posted on Monday by Paul Bois, a staff writer for the Daily Wire website, Gervais stated during an interview on talkRADIO:

There’s this new trendy myth … that people who want free speech want to say awful things all the time; It’s just isn’t true, it protects everyone.

The comedian is best known for creating The Office, a BBC show he started in 2001 that lasted for the following two years.

Gervais stated that if he tried to produce a show like that now, it “would be destroyed because 'woke’ viewers would take everything out of context.”The Office “was a show about everything,” he stated. “It was about difference, it was about sex, race, all the things people fear to even be discussed or talked about now in case they say the wrong thing, and they are canceled.”

In addition, executives at the BBC “have got more and more careful,” and “people want to keep their jobs, so [they] would worry about some of the subjects and jokes, even though they were clearly ironic, and we were laughing at this buffoon being uncomfortable around difference.” When asked about the state of comedy now, Gervais replied that “some people have lost their sense of irony and context” because audiences have been reduced to "two tribes of people screaming” at each other.

“I genuinely think I don’t do anything that deserves to be canceled,” he said. “Some people now don’t care about the argument or the issue, they just want to own someone; they want to win the argument.”

As NewsBusters reported in January, the comedian hosted the Golden Globes awards show and used his opening monologue to hammer the celebrities in attendance:

“If you do win an award tonight, don't use it as a platform to make a political speech, right? You're in no position to lecture the public about anything.”

You know nothing about the real world. Most of you spent less time in school than Greta Thunberg. {I}f you win, come up, accept your little award, thank your agent and your god.

Gervais later stated that experience was “quite zeitgeisty” since “people were tired of being lectured by multimillionaires telling them to recycle when they’re flying around in private jets.”