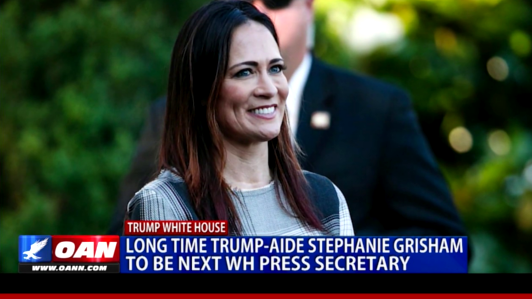 While most of Sarah Huckabee Sanders’ two-year tenure as President Trump’s press secretary led to many clashes with the media, her replacement -- Stephanie Grisham -- is continuing some of those traditions, including no daily briefings on a regular basis.

Grisham made the announcement while a guest on the Fox & Friends morning program on Monday, when she accused reporters of turning the event into political “theater” in their attempts to “get famous.”

In an article written by Breitbart editor Joshua Caplan, the interview included a question that led her to respond “not right now” and remark:

I mean, ultimately, if the President decides that it’s something we should do, we can do that, but right now he’s doing just fine.

And to be honest, the briefings have become a lot of theater, and I think that a lot of reporters were doing it to get famous.

“Yeah, they’re writing books now,” Grisham noted. “I mean, they’re all getting famous off of this presidency. And so I think it’s great what we’re doing now.”

She then listed the most “apparent” example: CNN’s chief White House correspondent Jim Acosta, “whose frequent outbursts toward the President and members of his administration have earned him scorn and mockery from the White House and even from some of his establishment media colleagues.”

Acosta authored Enemy of the People: A Dangerous Time to Tell the Truth in America and noted that his abrasive demeanor towards President Trump and other administration officials “bothers some people."

In an article written by Quint Forgey, the breaking news reporter for the Politico website, he noted that Grisham “has rarely participated in on-camera interviews since becoming press secretary in June.”

She also noted Trump's frequent, strolling exchanges with White House reporters as an example of how the President does face the press. Grisham next suggested that reporters’ criticisms of the President’s previous press secretaries played a role in Trump’s decision to discontinue the briefings.

She noted: “[I]t’s so important that, you know, the spokesperson for the President can adequately speak to his policies and get his message out there, and I think the President saw that that's not what was happening.”

Despite her reluctance to advocate on-air for the administration’s priorities, she weighed in that day on the “controversy surrounding Trump’s summer conversation with Ukraine’s president that is quickly consuming the White House and Capitol Hill.”

"The President made it very clear he did absolutely nothing wrong. This is just another reason for Democrats and for the media to attack and look for things that just aren't there,” she said.