Even though Marc Lamont Hill is no longer a commentator for CNN, he continues to use any means at his disposal as a tenured professor at Temple University in Philadelphia to slam Israel, and  continued to reject calls to denounce Nation of Islam leader Louis Farrakhan.

According to an article written by Shiri Moshe, a senior correspondent for the Algemeiner Journal -- a New York-based publication that covers Jewish and Israel-related news -- Hill made his comments while a guest on The Breakfast Club, a syndicated black radio program. He somehow compared Farrakhan to Bill O'Reilly, Sean Hannity, and Ann Coulter: 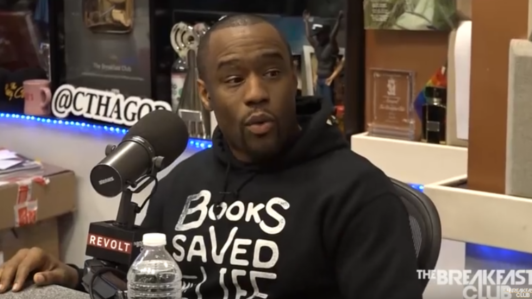 “For some reason, if you meet with Minister Farrakhan and you don’t throw him away wholesale, then you’re castigated in a way that doesn’t happen with anybody else,” Hill argued.

“Why is only one set of people untouchable?” He asked. “And why does every black leader have to ritually denounce Farrakhan in order to sustain a position? That doesn’t happen to anyone else.”

Hill insisted he disagreed with Farrakhan on "LGBT issues" and the "boundaries" of anti-Semitism, but called him "my brother," and touted how he's one of the "people who love us" [blacks]:

“Again, Minister Farrakhan is my brother,” the professor continued, before opposing “the idea that we have to renounce him, denounce him, throw [him] away” based on some disagreements.

The discussion took a bizarre turn when Hill asserted:

The New York City police, they’re killing us, but they’re being trained by Israeli security forces … and in other cities as well. So there’s a connection between the two.

Moshe responded to those comments by asserting that anti-Israel groups “have advanced similar allegations accusing Jewish-American groups that host exchanges between American and Israeli police forces of promoting violence against minorities in the U.S. These claims have been roundly rejected by the sponsoring organizations.”

The professor grumbled that “every act of resistance that Palestinians engage in is called terrorism.”

When his interviewer, the rapper Charlemagne tha God, presented Israeli objections, Hill replied “Of course there are Israelis and there are Jewish people who are victims of unethical, immoral, awful, atrocious acts,” Hill said. “I don’t dispute that.” But when asked directly if he supported “violent responses from Palestinians,” Hill replied: “I support self-defense.”

If you want to watch the entire 38-minute interview, just click on this link. Apparently, Hill hasn’t learned anything from being fired by CNN.