During a press briefing on Thursday, House Minority Leader Nancy Pelosi openly thanked people in the news media for creating an “echo chamber” that provided extensive coverage of the Democrats' “sit-in” seeking legislation to promote stricter gun control even though the Senate didn't approve a similar measure.

“Thank you all,” the California Democrat said. “I never saw the gallery so full,” she stated before noting that her staff “gave me six pages today. Six small-print, full pages listing of newspapers around the country where the sit-in was on the front page. I thank you for that. Thank you all.”

“We really kept you up late and during the night and all the rest; I mean, except for a State of the Union” address or events connected to "a visiting dignitary,” she added.

A day earlier, Pelosi stood on the Capitol steps and called for “an echo. We are echoing each other, and what we hope to do is create an echo chamber throughout America of a repeated message of 'No Bill, No Break.'”

In an article by David Rutz of the Washington Free Beacon website, the editor asserted that the press gave the event “breathless coverage,” including a “fawning interview” of Rep. John Lewis of Georgia, whom Luke Russert of MSNBC Live called “a civil rights icon” and stated:

You've had a distinguished congressional career. You've been here for many terms.

Many of your colleagues, who share your experience, have never seen anything like this -- the floor -- the House of Representatives -- taken over by a party, literally using tactics that you developed during the civil rights movement.

Another example of media support for the sit-in was when many people called the strategy “a publicity stunt" while David Muir touted on ABC's World News Tonight called the event “dramatic” and stated its participants were “demanding that the Republican majority allow a vote on gun control.”

Meanwhile, Caleb Howe of the RedState website had a different take on Pelosi's comment, stating in his title that the House minority leader “Accidentally Said the Most True Thing She’s Ever Said About Anything Ever.”

Howe noted that her statement on the “Dem Sleepover” “(a 'sit-in' they prefer to say) and inadvertently (we think) said the truest thing she's ever said about anything (and we mean anything) as she described what it is that Democrats want.” 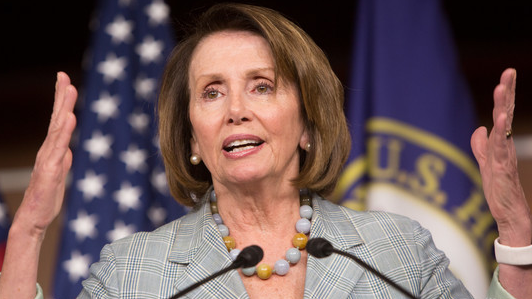 He then repeated Pelosi's remark that Democrats are looking for “an echo chamber.” “Ain't that the truth?” Howe asked before noting:

As NewsBusters previously reported, Pelosi wasn't the only Democrat to cheer on media coverage of the “sit-in.”

In the midst of the 26-hour filibuster, Rep. Jim Clyburn of South Carolina started his remarks by saying: “Let me begin by thanking the media,” which led to whoops, cheers and a standing ovation from the Democrats who were still in the chamber even though the Republican leaders had turned off all microphones and cameras.

Instead, Rep. Scott Peters, a Democrat from California, used video from the Periscope live screening app to broadcast their message outside the building to people across the country.

"Today stands out as a great example of what we mean when we talk about a free press and why we need one,” Clyburn declared.

Apparently, people in the "mainstream media" are just doing their jobs when praising a procedural move by the Democrats that brings the House of Representatives to a halt, but they are also free to hammer Republicans like Ted Cruz when the Texas official "held the Senate floor for more than 21 hours and helped shut down much of the government all in protest of President Obama's health-care law.”

If there was even the slightest doubt that the media is “fair and balanced,” this deluge of gratitude from Democratic members of Congress should remove every last vestige of that concept.

And if that wasn't proof enough of the press's habit of throwing softball questions to Democrats, Russert actually asked Pelosi as she was leaving the room if she attended Game 7 of the National Basketball Association finals between her hometown Golden State Warriors and the Cleveland Cavaliers.

Must have been a really slow news day.