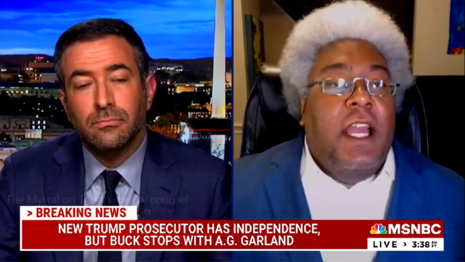 Although most liberals are hailing Attorney General Merrick Garland for appointing Jack Smith as Special Counsel to investigate Donald Trump, The Nation's Elie Mystal is furious. On MSNBC's The Beat with Ari Melber on Friday, Mystal raged that Trump should have faced a special counsel and been put on trial long before he could announce another run for president.

Mystal believes that a special counsel investigation will result in yet more delay so they can't have the Trump trial and conviction that he so desperately desires prior to the next election. He raged against Garland's "self-serving, pearl-clutching press conference."

If Merrick Garland thinks that kicking this to Jack Smith from The Hague is going to take down the partisan pressure on him and make the right wing feel like this is a fair process, he’s an idiot, right? Like, of course, wait until this right -- wait to these people get into Jack Smith`s laptop, wherever the hell that is, right? Wait to these people start going through Jack Smith`s garbage can to find out his priors, right?

The idea that these people on the right who are in the cult of Trump are going to let this go because now we have Jack Smith – like, is he insane? It’s going to be the same appearance of partisanship. All he’s done is delay when he has to make the call, because again, as you pointed out, it’s still his call. So, like, what is he doing here?

Finally we have Mystal so upset over Garland that he angrily punches a fist into his hand due to his overwhelming yet entertaining sense of frustration over what he thinks will be inevitable delay due to Garland's appointment of the Special Counsel.

The passage of time. Okay. We are fourteen months away from the New Hampshire primary where Donald Trump will most likely be a candidate in that primary. How long do you have to think you have to charge him to get the trial going before the primary process? Because if you think Donald Trump is going to be sitting in a trial while he's also in the Iowa caucuses I got another thing coming for you. So if you're going to charge him and get that trial any clearance from the primary process you kind of got to go now and all this process is going to do is add delay.

Mystal used barnyard metaphors: Garland is "like a rancher opening the barn door, watching the horses run away and being saying like, well, now that the horses are out, I need a special cowboy to come and wrangle it. Trump might not even be running for president if Garland had done the things to hold him accountable before today. So, he is literally responding to a problem he himself is part of creating."

One big fringe benefit of a delay by the Special Counsel would be to see the comedic reaction by Mystal when melts down yet again.