Atlantic Magazine: 'The Rosary Has Acquired a Militaristic Meaning' 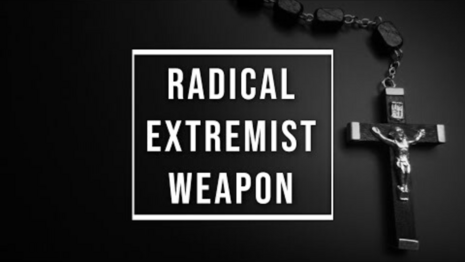 A new symbol has joined the pantheon of hate along with the "OK" hand sign and the thumbs up according to Atlantic magazine. The prayer beads of the rosary.

This discovery was made by Daniel Panneton in Sunday's edition of the Atlantic whose headline blared "How Extremist Gun Culture Is Trying to Co-Opt the Rosary." The subheadline described the rosary as a "sacrament," which is a ridiculous error, It is called a sacramental.

And now we join Panneton as he weaves his conspiratorial tale of how the rosary has somehow become a radical symbol of hate.

Just as the AR-15 rifle has become a sacred object for Christian nationalists in general, the rosary has acquired a militaristic meaning for radical-traditional (or “rad trad”) Catholics. On this extremist fringe, rosary beads have been woven into a conspiratorial politics and absolutist gun culture. These armed radical traditionalists have taken up a spiritual notion that the rosary can be a weapon in the fight against evil and turned it into something dangerously literal.

Their social-media pages are saturated with images of rosaries draped over firearms, warriors in prayer, Deus Vult (“God wills it”) crusader memes, and exhortations for men to rise up and become Church Militants. Influencers on platforms such as Instagram share posts referencing “everyday carry” and “gat check” (gat is slang for “firearm”) that include soldiers’ “battle beads,” handguns, and assault rifles. One artist posts illustrations of his favorite Catholic saints, clergy, and influencers toting AR-15-style rifles labeled sanctum rosarium alongside violently homophobic screeds that are celebrated by social-media accounts with thousands of followers.

Don't call this a "Hail Mary pass." The weird thing here is that the net effect of Panneton's rantings is probably to increase the popularity of the rosary in large part just to irk people like him who seem overboard obsessed with it.

Militia culture, a fetishism of Western civilization, and masculinist anxieties have become mainstays of the far right in the U.S.—and rad-trad Catholics have now taken up residence in this company. Their social-media accounts commonly promote accelerationist and survivalist content, along with combat-medical and tactical training, as well as memes depicting balaclava-clad gunmen that draw on the “terrorwave” or “warcore” aesthetic that is popular in far-right circles.

...Catholics are taught to love and forgive their enemies, that to do otherwise is a sin. But the extremist understanding of spiritual warfare overrides that command. To do battle with Satan—whose influence in the world is, according to Catholic demonology, real and menacing—is to deploy violence for deliverance and redemption. The “battle beads” culture of spiritual warfare permits radical-traditional Catholics literally to demonize their political opponents and regard the use of armed force against them as sanctified. The sacramental rosary isn’t just a spiritual weapon but one that comes with physical ammunition.

Psst! Better not tell Panneton but tactical paracord rosaries, or what he would call "battle beads," are now available on eBay and thanks to him, those sales will soon be surging.

This is quite a match with The Atlantic trying to tell us that the far-lefties at Jane's Revenge are some kind of phantom "bogeyman" and that the right wing calling out their threats and fire-bombings is unhelpful: “A fixation on the threat of 'Jane’s Revenge' may ultimately contribute to its spread."