AP Admits Mexican President Got Along Much Better with Trump 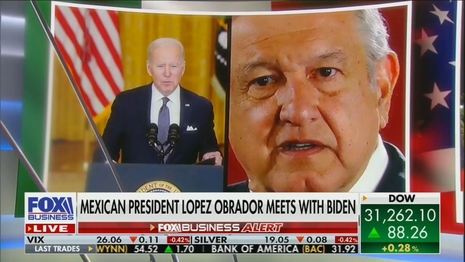 In what appears to be yet another sign of the growing disenchantment with Joe Biden due to his poor performance in the White House, the Associated Press did something on Monday that would have been unthinkable a year ago: It compared Biden very unfavorably with Donald Trump.

And it wasn't just for the sake of doing so, but it concerned the comparison was over their relationships with the leader of a key U.S. ally: Mexican President Andrés Manuel López Obrador.

AP pointed out just how terrible Biden's relationship is with AMLO in contrast to the much better relations with Trump who was focused on border security:

The U.S.-Mexico relationship — a straightforward tradeoff during the Trump administration, with Mexico tamping down on migration and the U.S. not pressing on other issues — has become a wide range of disagreements over trade, foreign policy, energy and climate change.

President Andrés Manuel López Obrador is to visit Washington on Tuesday to meet with President Joe Biden, a month after López Obrador snubbed Biden’s invitation to the Summit of the Americas in Los Angeles. Mexico’s leader had demanded that Biden invite to the summit the leaders of Cuba, Nicaragua and Venezuela — all countries with anti-democratic regimes — and he has also called U.S. support for Ukraine “a crass error.”

On that, and other issues, it’s clear López Obrador is getting along much worse with Biden than with Donald Trump, who threatened Mexico, but wanted only one thing from his southern neighbor: stop migrants from reaching the border.

One big reason that caused the Mexican president to sour on Biden was not his lax immigration stance, but rather the U.S. insistence that oil-rich Mexico follow the climate change agenda.

It is going to be interesting to see the coverage by AP and other media outlets in a few days when Biden arrives in Saudi Arabia to beg the government of what he labeled as a "pariah" state for the same oil that he is criticizing Mexico for relying upon.

Exit question: Will there be more unfavorable comparison of Biden with Trump in order to ease the former out of the office now that he has proven to be a disaster for the country and, most importantly for the media, the Democrats? We shall see!