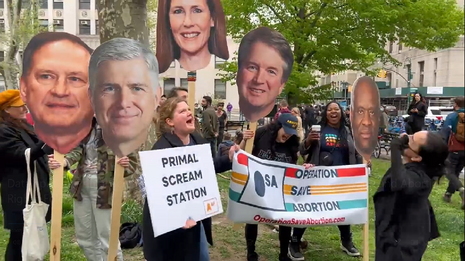 Are you a liberal who can't get over the news that the Supreme Court might be overturning Roe vs Wade, at least according to the leaked draft? Well, Michael Schulman ofThe New Yorker has a sort of helpful suggestion:  "Devastated by the Abortion News? Try Primal Screaming."

A group called Abortion Access Front had set up a “Primal Scream Station,” with placards of the six conservative Justices’ faces. An employee named Molly was dressed in a sequinned vulva costume. “This is my summer vulva outfit,” she said. “Unfortunately, we have to do so much protesting that I have a winter vulva outfit as well.” She yelled, “Step right up! Be a primal screamer! Flip ’em off!” Some women counted down from three and screamed long and loud. Wobbling, Molly said, “That made me want to have a cigarette—Jesus Christ!”

If are wondering what this abortion primal screaming looks like, Libs of TikTok show us an example:

Happening now in Foley Square, NYC. People are REALLY angry that it will be more difficult to kill babies. pic.twitter.com/Cco6sLxfKn

As ear-piercing as the primal screaming is, at least it is a harmless way for the pro-abortionists to get their rage out of their system. But they're still hoping that the leak will shift the court back to the middle somehow:

But the reality of reproductive rights wasn’t just hypothetical; it was personal and cross-generational. In a group of four thirtysomething women, one had had an abortion and another had accompanied a friend to a clinic. Daniele, in a green turtleneck, had texted friends who play in a band with her (“twee-inflected feminist K Records-y pop”), hoping, since the Supreme Court’s opinion was still a draft, that “if we really scare the s--t out of them they’ll change their minds."

Nancy Pelosi is encouraging a burst of "public sentiment" to change the SCOTUS tilt.

On MSNBC, Nancy Pelosi holds out hope the Leaker helps shift the Supreme Court back toward abortion, and calls on women to "weigh in" with aggressive public sentiment: "I think there's a better outcome than what we have seen in the first draft, which is radical." pic.twitter.com/R21NmEZVdg