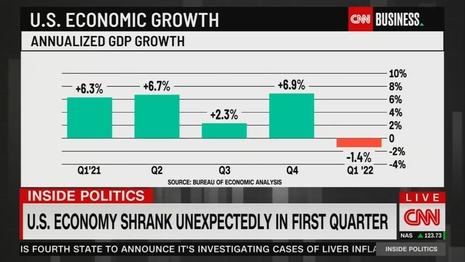 Have you ever noticed how much of the media employs the word "unexpectedly" in regards to the economy? When there is a Republican in the White House the word is used when the economy improves beyond projections as happened soon after the COVID lockdown in June 2020 when the Financial Times reported that "Unemployment rate in US falls unexpectedly to 13.3%."

However, now that we have a Democrat administration, the term is used to describe what happens when economic conditions get worse, much worse such as when it was reported on Thursday that the U.S. gross domestic product contracted by an annualized rate of 1.4% for the first quarter of 2022. As a result we have "unexpectedly" bursting out all over in the media such as at Yahoo! Finance which reported that "US GDP unexpectedly contracted at a 1.4% annualized rate in Q1":

U.S. economic activity unexpectedly contracted for the first time since the second quarter of 2020 in the first three months of 2022, with lingering supply chain constraints, inflation, and disruptions amid Russia's war in Ukraine weighing on growth.

The Bureau of Economic Analysis (BEA) released its initial estimate of first-quarter U.S. gross domestic product (GDP) Thursday at 8:30 a.m. ET. Here were the main metrics from the report, compared to consensus data compiled by Bloomberg:

"Unexpectedly" also popped up at the Economist in their sad write-up, "America’s economy unexpectedly contracts in the first quarter":

The American economy is contracting. Data out on April 28th revealed a fall in output of 1.4% in annualised terms, down from growth of nearly 7% at the end of last year. That is, however, misleading because it is more a reflection of strong imports and shifting inventory levels than of a sudden slowdown. Underlying demand is strong—personal consumption rose by 2.7% in the first three months of 2022—and most analysts are predicting growth for the full year.

Of course, if there is no growth for the full year, we can expect the Economist to pull out the U-word again to describe the yearly downturn.

Among the more amusing of those employing the U-word to describe the economic downturn was CNN's Chris Cillizza, who is already sitting shiva over the fate of the Democrats in November in "Today is a disastrous day for Democrats' 2022 chances":

The news that the US economy unexpectedly shrank over the first quarter of the year is an absolute body blow to Democrats already reeling amid growing economic concerns ahead of the 2022 midterm election.

...If things stay roughly where they are today -- in terms of economic measures like GDP and CPI and Americans' perceptions of the state of the economy -- Democrats will experience a cataclysm at the ballot box this fall. The question won't be whether they hold their paper-thin majorities in the House and Senate, but rather how big the electoral hole will be that they have to try to dig out from over the coming decade.

It sounds as if Cillizza foresees a not unexpectedly disastrous outcome for the Democrats in November.