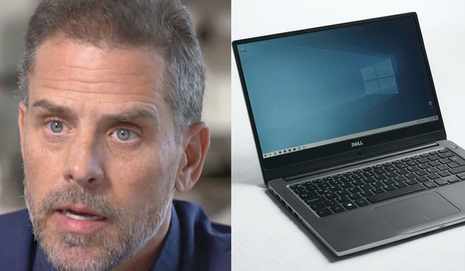 Jeffrey Goldberg, the editor-in-chief of Atlantic magazine, penned an article on the subject of disinformation to lead into the magazine's conference with Obama strategist David Axelrod in Chicago. We might expect him to at least mention the recent exposure of the falsehood that the information on Hunter Biden's laptop was "Russian disinformation."

Now that The New York Times and The Washington Post finally got around to admitting the authenticity of Hunter's emails, you'd think now is a time for engaging with this inconvenient truth. However, in Goldberg's Wednesday article on the topic -- "Disinformation Is the Story of Our Age" -- the suppressed Hunter Biden laptop story is completely memory-holed.

Goldberg whisked right by that story, but he was deeply upset that Rep. Lisa McClain (R-Mich.) claimed Donald Trump got Osama bin Laden.

It is difficult to forget that night in 2011 when Barack Obama told the world that, on his orders, a team of Navy commandos had killed the al-Qaeda leader. But Representative Lisa McClain, a first-term member of Congress, showed that, with effort, and with a desire to feed Trump’s delusions and maintain her standing among his supporters, anything is possible.

Like a good Democrat, Goldberg sees the overwhelming majority of disinformation coming from the Republicans:

The threat posed by disinformation is the reason The Atlantic is joining with the Institute of Politics at the University of Chicago to stage a conference, starting today, that is meant to examine disinformation in all of its manifestations. When David Axelrod, the founder and leader of the IOP, and I first discussed this idea, we both agreed that the future of this country—and of our democratic allies around the world—depends on the ability and willingness of citizens to discern truth from falsehood.

Axelrod and I are both aware that disinformation is a virus that has infected much more than a single political party (though in my opinion, only one party in the American system has currently given itself over so comprehensively to fantasists). And we’re aware that there is only so much any citizen can do, when faced with a social media–Big Data complex that makes it easier and easier to inject falsehoods into political discourse. “Disinformation, turbocharged by the tools social media and Big Data now afford, threatens to unravel not just our democracy but democracies everywhere,” he said...

And yet Goldberg claimed "We strive for nonpartisanship at The Atlantic."  Sure, the nonpartisan magazine that endorsed Hillary Clinton in 2016 and Joe Biden in 2020, urging a "vote for the decent man" -- with the indecent son.

At their "disinformation" conference the ostrich attitude toward the Hunter Biden laptop story was personified by Atlantic writer Anne Applebaum, who feigned disinterest in the subject when questioned about it by a student.

WATCH The Atlantic’s @anneapplebaum refuse to answer @RealDSchmidt's🔥🔥 question about Hunter Biden’s laptop during @UChicago’s “Disinformation and the Erosion of Democracy” conference! pic.twitter.com/1OgXBBiiI0

Anne Applebaum's problem with the laptop contents is they completely shatter the narrative they are trying to present, that disinformation comes primarily from the Republican baddies, so they very conveniently don't find it "interesting."  That means they can memory-hole it.